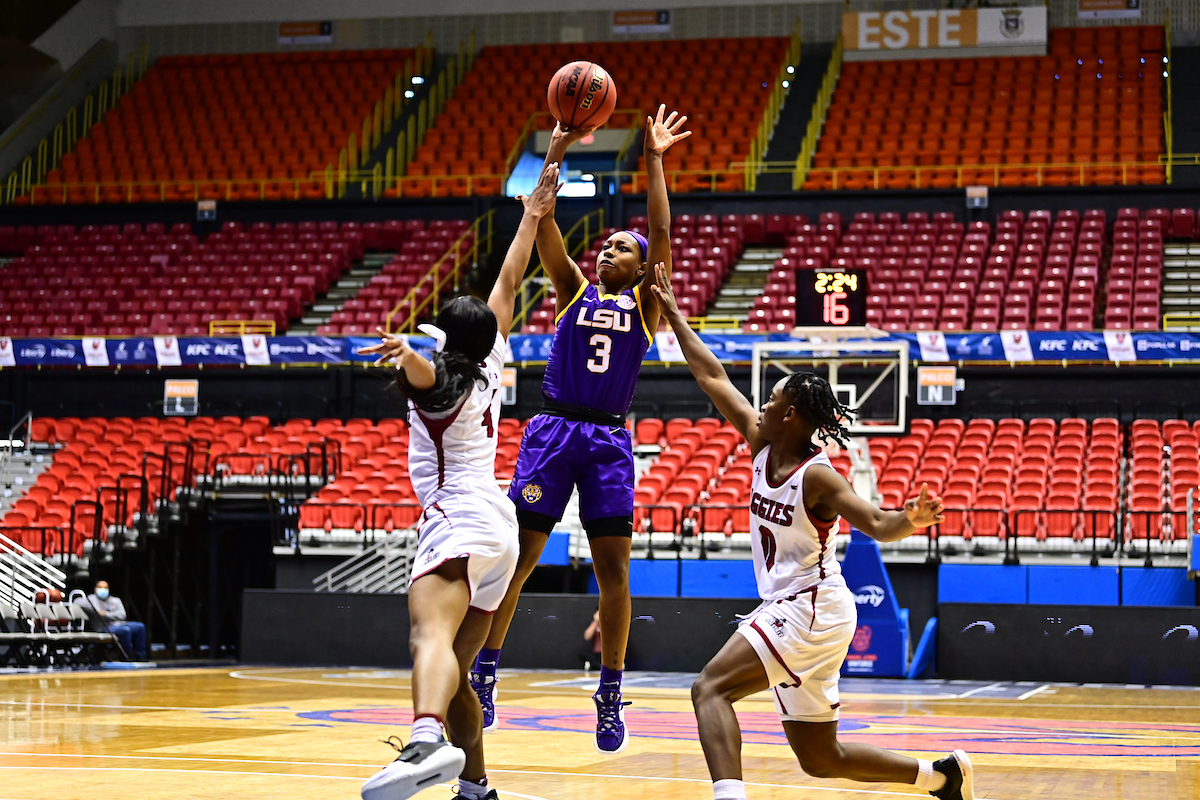 SAN JUAN, P.R. – The LSU Women’s Basketball team used a crucial third quarter run, led by Khayla Pointer, to come away with a 72-52 victory over New Mexico State Friday during a physical contest in the Coliseo Roberto Clemente at the San Juan Shootout.

The Tigers, who struggled to find a rhythm in the first half due to NMSU’s physical play, outscored the Aggies, 43-22, in the second half to improve to 4-1.

“(New Mexico State) came out physical,” said Head Coach Kim Mulkey. “They were fired up. They were excited. We were kind of flat footed for whatever reason.”

Pointer helped the Tigers get going after a slow first half. Sixteen of her 20 points came in the second half as she helped lead the charge after the slow start. Alexis Morris finished with 12 points and also had 7 rebounds. Faustine Aifuwa’s 8 rebounds were a game-high.

“We don’t win today without Khayla Pointer, and we ran a lot of stuff for her,” Mulkey said.

Bigue Sarr had 13 points for NMSU and Sofia Inoussa finished with 11 as the only two Aggies to reach double figures.  Three Aggies finished with four rebounds and Maggie Isbell led the way for them with four assists.

LSU will take on Missouri State Saturday at 11:15 a.m. CT to wrap up play in Puerto Rico. The game will be streamed on Flohoops and fans can listen on the LSU Sports Radio Network 107.3 in Baton Rouge or online at lsusports.net/live. The Grizzlies defeated Virginia Tech Friday in San Juan and feature the nation’s leading rebounder in Jasmine Franklin.

“Experience matters,” Coach Mulkey said. “The tougher the competition, you need your most experienced players on the floor. Missouri State is a Sweet-Sixteen team from last year.

“They have the leading rebounder in the entire country. I’m so impressed what I’ve seen them do here, but also on film. It’s going to be a tough one for us.”

The Tigers got off to a slow start Friday at the San Juan Shootout. The game lacked rhythm and NMSU was able to play physical and prevent LSU from finding its groove. After Awa Trasi scored the first five for LSU, NMSU went on a 9-0 run. The Tigers continued to hang in there and were able to reduce the deficit to two at the end of the quarter, despite not playing their best basketball.

Aifuwa tied the game at 17 on the first possession of the second quarter, banking in a shot from the top of the key, but every time the Tigers would get close to jumping in front, the Aggies would get a score to stay out in the lead. The Tigers trailed by as many as six in the quarter, but by the time Ryann Payne went to the free-throw line before the half and made one of two, it was a one-point game and then Aifuwa blocked a last second shot attempt from NMSU as LSU trailed, 30-29, at the half.

The Tigers struggled to score the ball in the first half, making just 9 of 33 shot attempts and going 0-7 from beyond the arc. In addition to that, despite drawing 17 first half fouls, LSU shot just 37.5-percent from the free-throw line.

Pointer gave LSU the lead on the opening possession of the third quarter, setting up a big half for the guard. Behind Pointer’s lead and great defensive pressure, the Tigers gained momentum and were eventually able to build a lead. In the middle part of the third quarter, LSU scored 10 straight and never looked back, going on a 15-3 run. The quarter ended fittingly with a buzzer-beater three-pointer from Pointer to give her 10 in the quarter and LSU a 53-46 lead. Morris also had 6 in the quarter.

LSU’s suffocating defense continued to force the Aggies to make mistakes and LSU was able to extend its lead at the beginning of the fourth quarter. LSU outscored NMSU 16-9 in the quarter and pointer scored her final six as the Tigers were able to pick up the 20-point win behind a great second half performance.