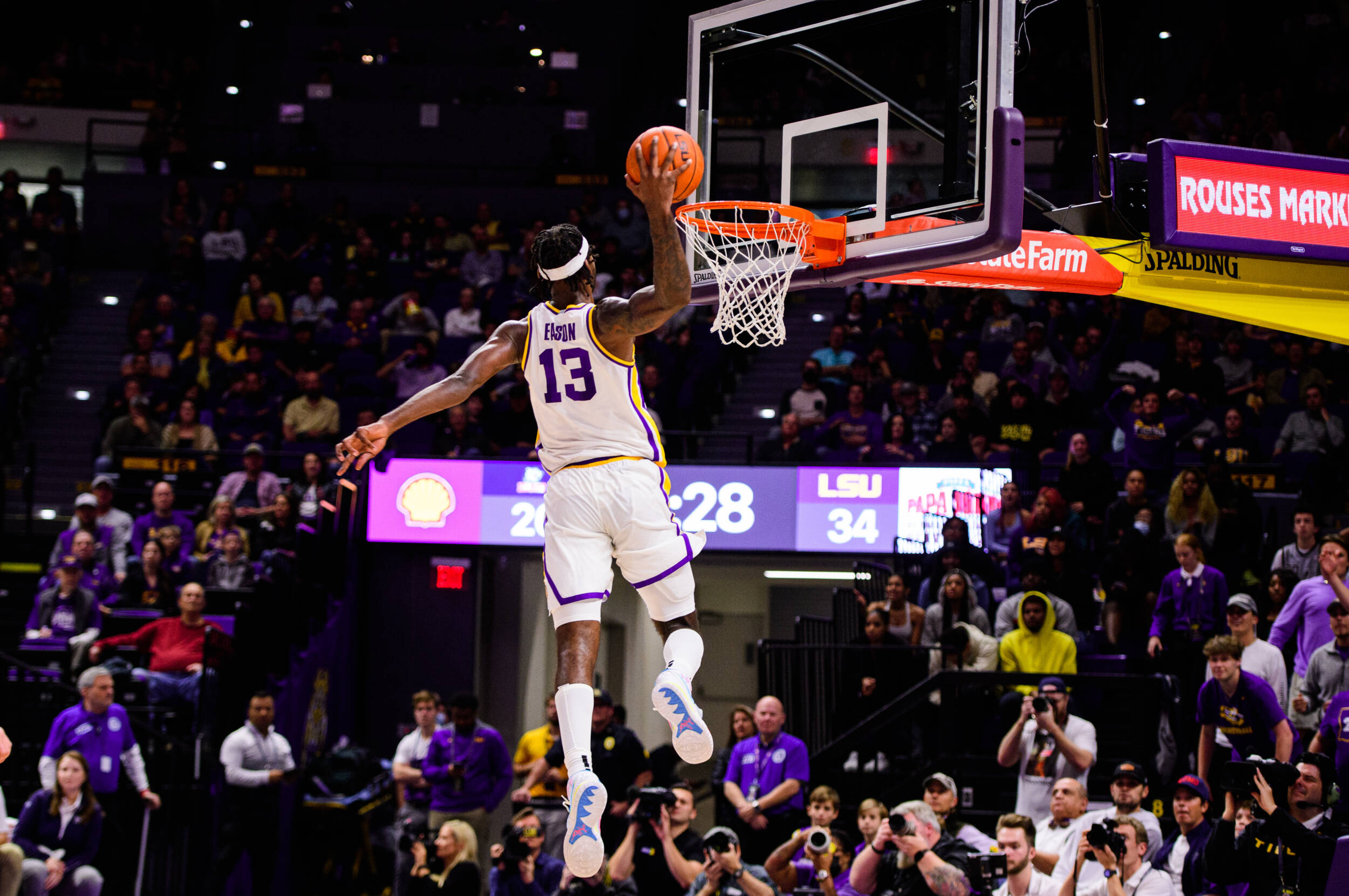 NICEVILLE, Florida – On a night when scoring wasn’t happening as much as it had been the first five games of the season, the Tigers used defense, rebounds and free throws to gut out a 68-63 overtime victory over Penn State Friday night in the semifinals of the Emerald Coast Classic at Raider Arena at Northwest Florida State College.

The Tigers will play in the championship game on Saturday night at 6 p.m. CT against another 6-0 team in Wake Forest, an 80-77 winner over Oregon State, also in overtime, in the other semifinal.

The game will be broadcast on the CBS Sports Network and broadcast locally on Guaranty Media affiliate 100.7 FM The Tiger because of football coverage on Eagle 98.1 FM. The game will be available online at LSUsports.net/live and on the LSU Sports Mobile App.

LSU shot 34.8 percent for the game, 24-of-69, and just 28 percent in the first half. But LSU dominated on the offensive glass, 17-8, was able to stay even on second chance points with the Nittany Lions and get a 21-5 advantage on points off turnovers. LSU forced 16 Penn State turnovers while the Tigers committed under 10 turnovers for the first time this season (7).

Senior Xavier Pinson gave LSU a chance to win in regulation when he scored on a three-pointer with 35 seconds to play. Both teams turned it over giving Penn State a final shot to tie or win. Darius Days would foul with LSU having a foul to give with 4.6 seconds left leaving Penn State with little time to make their attempt.

First Myles Dread missed a three, Seth Lundy got the offensive rebound and the ball was tipped in by Lundy to force overtime with 0.6 remaining.

In the overtime, LSU scored the first six points on two Tari Eason free throws, a Pinson floating jumper and two more Easton free throw to make it 64-58 with 3:14 to play. Penn State made a three-pointer and after a miss by LSU, Sessions got a layup to cut the LSU lead to 64-63 with 2:03 to go in overtime.

Eason went back to the line on the next possession and made one of two free throws but LSU controlled the ball on the second shot miss. Pinson was fouled and got one free throw to push the LSU lead back to three with 1:37 left.

Penn State’s Lundy missed a dunk and a second chance jump shot. Penn State got the offensive board again but on the drive by Lundy, Efton Reid drew the charge 1:02 remaining.

The Tigers failed to score and Penn State called a timeout with 9 seconds to play getting one final shot. Jaheam Cornwall’s three-pointer against LSU’s defense was missed, East was fouled and made two free throws in the final five seconds to ice the game and send LSU into its first championship game of a bracketed tournament since 2004.

Eason had seven of LSU’s 10 points in overtime and 20 for the game to go with nine rebounds. Eason was 10-of-12 at the free throw line. Pinson scored 15 points as the only player in double figures.

LSU has now won in back to back games when Darius Days did not score in double figures, breaking a streak that started at the beginning of the 2020-21 season. Days had eight points and six rebounds.

Penn State now 3-2, was led by Jalen Pickett with 14 points, while Sessoms had 13 points and 10 rebounds and Myles Dread had 11. John Harrar, who was averaging a double double was held to seven points and seven rebounds.

The Nittany Lions made 12 three-pointers while LSU had just four. LSU was 16-of-21 at the free throw line compared to Penn State just 3-of-6. LSU outrebounded Penn State, 42-35.

Penn State led by as many was five in the game and three at the intermission, 29-26. LSU’s biggest lead was the first six points in overtime. The game had seven lead changes and five ties.

On his thoughts on the game…

“It was a great game. Two good teams, really physical. They played a Big 10 style of game with their physicality. They’re going to be a very good team. They did some things differently than other teams we’ve played, they forced us to change up some things offensively. Our defense and rebounding bailed us out. We haven’t been able to say that very often, but defensive rebounding bailed us out and especially offensive rebounding with how many shots we missed.”

On earning an OT win…

“We’re going to have to win games like that. That’s how it’s going to be in the SEC, that’s how it’s going to be when you play these types of teams. We talk about six-minute games and executing. We had some opportunities, even at the end there, we messed some things up but that last inbounds play where they tipped it in at the end of regulation, we couldn’t have guarded that any better. We switched it out, Mwani [Wilkinson] got his hand on the ball, the ball went through [Darius] Days’ hand. We couldn’t have guarded that stuff any better. I thought our guys did some good things with that. We have to continue to clean up some of those details.

“He was tremendous. He was able to drive the ball and get on the offensive glass. He led us in offensive rebounding, went 10 of 12 from the free-throw line, knocked down his free-throws. He did a really nice job.”