No challenge is too daunting for LSU senior Jontre Kirklin. Asked to play a variety of roles during his collegiate career, Kirklin has excelled in all three phases of the game – offense, defense and special teams. 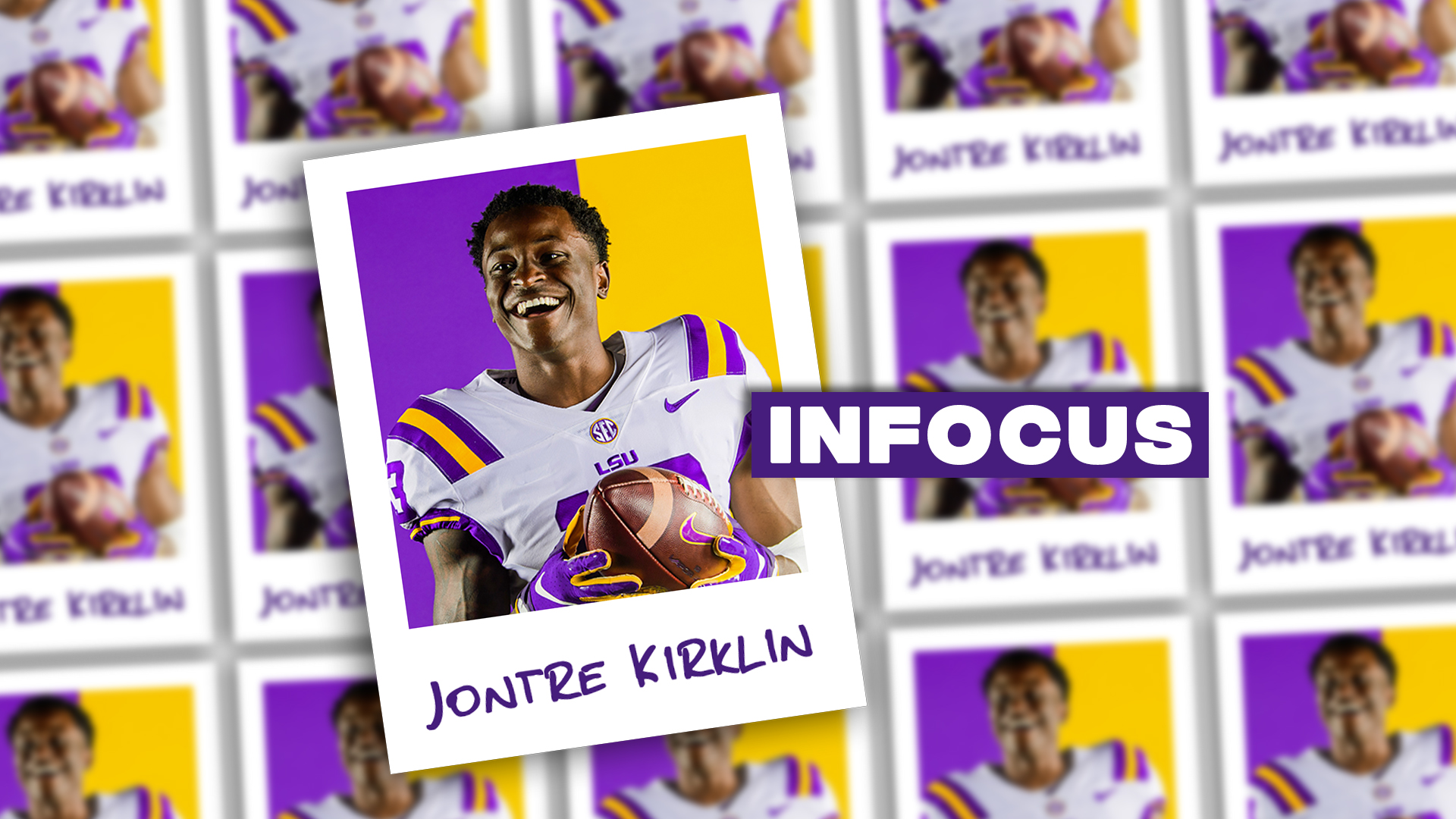 No challenge is too daunting for LSU senior Jontre Kirklin.

Asked to play a variety of roles during his collegiate career, Kirklin has excelled in all three phases of the game – offense, defense and special teams.

A dual-threat quarterback at Lutcher (La.) High School, he led the Bulldogs to back-to-back state championships and accounted for over 7,500 yards passing and 3,000 yards rushing during his career.

As one of the top prep prospects in Louisiana, Kirklin signed after the 2016 season with LSU, where he was moved to cornerback for his freshman year. He made a seamless transition to defense for the 2017 season, seeing action in 12 games while also excelling on special teams.

In 2018, he was asked to play on both sides of the football as a cornerback and wide receiver, and beginning with LSU’s 2019 national championship season, he has been a full-time wideout.

Kirklin says that though he’s had to adapt to a number of assignments during his LSU career, he’s very grateful for the opportunity to thrive as a student-athlete.

“It’s meant a lot to me and to my family to have experienced the progression that I’ve had on the field,” Kirklin explained. “From playing quarterback in high school to being recruited to play any position on the field – cornerback then to wide receiver, then back to cornerback, and to finish off my college career at wide receiver has been rewarding.”

Kirklin, a sport administration major, is focused in the classroom as well, and he’s scheduled to graduate from LSU in December.

“I’m working to graduate this semester,” Kirklin said. “Earning a college degree means a lot to me, and especially to my family. I owe it to my family and to my coaches to get my degree from LSU.”

Kirklin said his college experience has been enhanced in recent months by the commitment of the LSU Athletics Department to the promotion of diversity, equity and inclusion.

“I’m thankful I can be myself without judgment and build relationships with people of any race,” Kirklin posted on his Twitter account in October. “It has been encouraging to see the support for people of color and the awareness brought to social injustice on campus.”

Kirklin returned to LSU for a fifth season in 2021 hoping that the Tigers would compete at a championship level. Though the Tigers’ record has fallen short of preseason expectations, Kirklin believes the team’s work ethic has remained solid.

“Though the season has not gone as well as we all expected,” Kirklin said, “I still see my teammates constantly giving great effort at practice every day. We’re working hard with no complaining, just hard work.”

As the veteran within the LSU wide receiver corps who happened to own a national championship ring, Kirklin feels an obligation to inspire a very talented group of freshman wideouts.

“With me being an upperclassman in the wide receiver room,” Kirklin said, “it’s important for me to show the young guys the ropes of the LSU standard of performance. They keep me focused as well, and we all hold each other accountable, no matter the situation.”

As he reflects upon his five-year collegiate career, Kirklin is especially proud of the Tigers’ 2019 national championship season, widely regarded as the best in college football history. LSU posted a 15-0 mark, defeating seven Top 10 opponents over the course of the year.

Kirklin played in 14 games in 2019, contributing both on special teams and as a wide receiver. He recorded a special teams tackle in the CFP Championship Game win over Clemson in New Orleans.

“Playing in and winning a national championship was a dream come true,” Kirklin said. “I will forever cherish and remember that moment for the rest of my life.”

Kirklin, who has played in 55 college games, makes his final appearance in Tiger Stadium Saturday night as LSU plays host to Texas A&M, and after graduation next month, he plans to embark upon a pro football career.

“I plan to move on to pro ball and fulfill my lifetime goal of making it to the NFL,” Kirklin said.

No matter where his career path may lead, Jontre Kirklin will never forget the impact LSU has made upon his life.

“LSU has taught me how to be patient and how to keep working through the midst of the storm,” Kirklin said. “LSU is home, and there is no other place like home.”