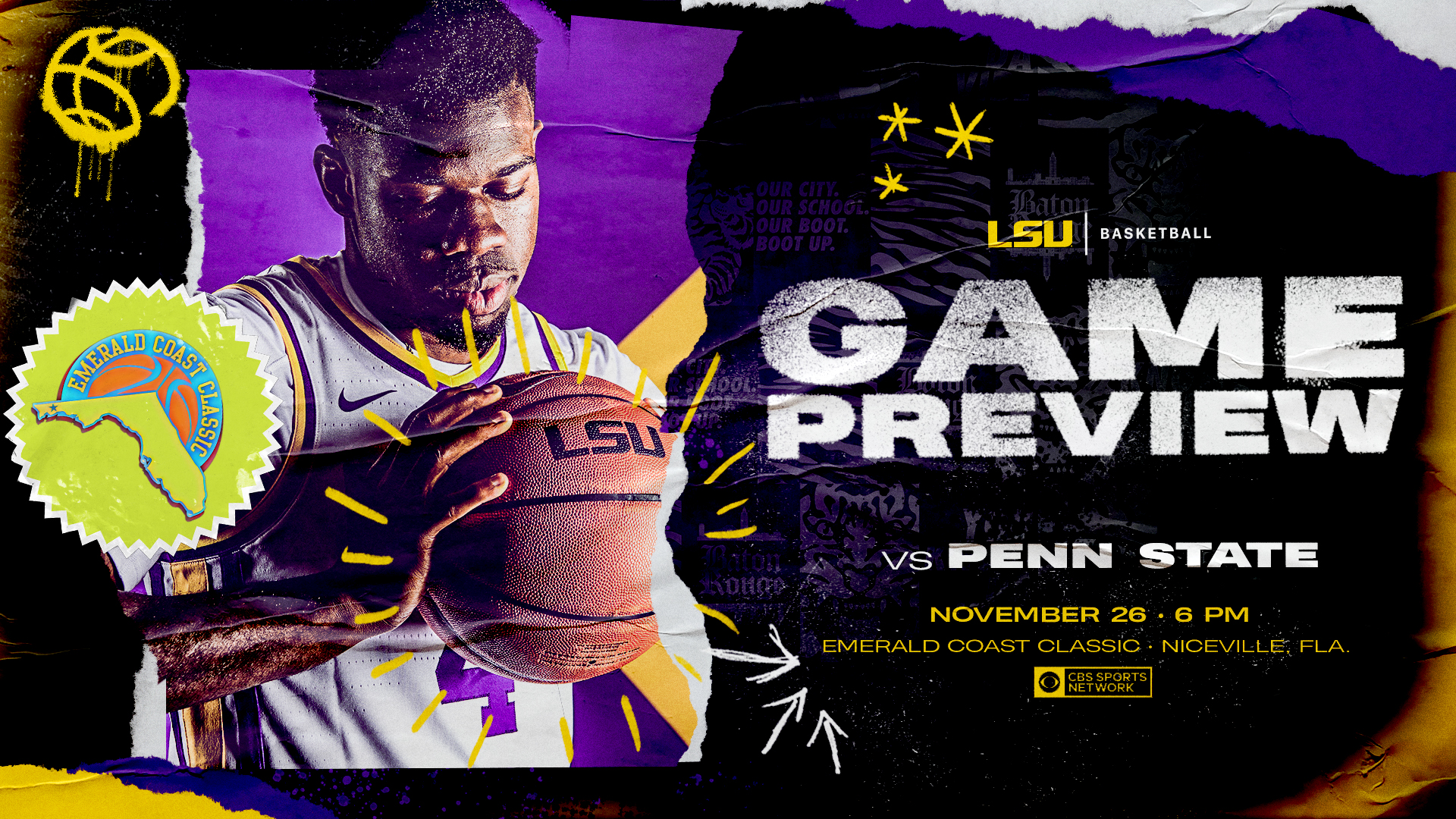 NICEVILLE, Florida – The LSU Tigers look to improve starting Friday on an issue that has plagued them for over a decade and that is winning a regular season multi-team event.

LSU and Penn State meet Friday at 6 p.m. CT in a semifinal in the Emerald Coast Classic at Raider Arena, Northwest Florida State College, looking to get to a Saturday championship game.

The game will be televised on the CBS Sports Network and broadcast on the affiliates of the LSU Sports Radio Network with Mike Grace sitting for Chris Blair and joined by former LSU head coach John Brady.

The Tigers will play either Oregon State or Wake Forest on Saturday with an LSU win putting the Tigers in the championship game at 6 p.m. CT. An LSU loss would put LSU in the third-place game at 3 p.m. Oregon State and Wake Forest play at 8:30 p.m. Friday.

Doing well in the so-called multi-team events (MTE) has been the one goal under Coach Will Wade that the team hasn’t accomplished, although the run of issues in these events dates back to at least 2008.

The Tigers in Coach Wade’s four years are 4-6 in events, going 1-1 the last two seasons at St. Louis and in Jamaica.

The last technical MTE LSU won was a two-weekend round-robin event when LSU went 4-0 in the 2008 LSU Invitational defeating Alcorn State, Northwestern State, Centenary and Troy. The last tournament win LSU in a bracketed event where tournament results determined the next round pairings was the 2004 LSU Louisiana Classic when LSU defeated Tulane and UL-Lafayette.

It was a subject Coach Wade addressed following the team’s win over Belmont on Monday.

“We got to be better,” he said. “We haven’t been very good in tournaments. We got beat by Florida State in overtime after we beat Charleston (in Orlando in 2018). We gave away the Utah State game (in Jamaica in 2019). It’s like I told our guys, we’ve won a lot of games, we’ve won the SEC, we’ve done a lot of stuff here. We have been terrible in these early-season tournaments. We got to go there on a mission, on purpose, to win the thing.

“To win the thing, you got to win the first one, and so we got to put everything we got into Friday against Penn State. A good team from the Big 10. They’ll have athletes and bodies that look like ours, so we’ve got to be better in these environments. We haven’t been and we got to get that thing changed starting on Friday.”

LSU is 5-0 after dominating wins over ULM, Texas State, Liberty, McNeese and Belmont as the Tigers have shown that offense can create defensive opportunities by allowing LSU to get into its presses while the defense creates the turnovers that let’s LSU get into its transition and fast break offense.

Penn State is 3-1 on the year after an 85-74 win over Cornell on Monday. The team also has wins over Youngstown State and St. Francis Brooklyn with a loss on the road at UMass.

The Tigers have held all five opponents to under 60 points to open the year, the first time LSU has held its first opponents under 60 since the start of the 1946-47 season.

LSU is led by senior Darius Days, averaging 19.2 points a game, while sophomore transfer Tari Eason is at 13.6 points and a team best 8.8 rebounds a game. Freshman Efton Reid is at 10.2 points a game. Three other players – Brandon Murray, Eric Gaines and Xavier Pinson – are averaging between 9.0 and 9.6 points.

The Tigers have averaged 85.4 points a game so far and is giving up an average of 51 points a contest.

LSU and Penn State have not met since the regional semifinals of the 1954 NCAA Tournament when the Nittany Lions scored a 78-70 victory.

The team practiced for about 85 minutes Thursday afternoon at the tournament venue, going over the scouting report for Penn State.

Will Wade Radio Show to Debut Monday at 7 p.m.

Will Wade Radio Show to Debut Monday at 7 p.m.