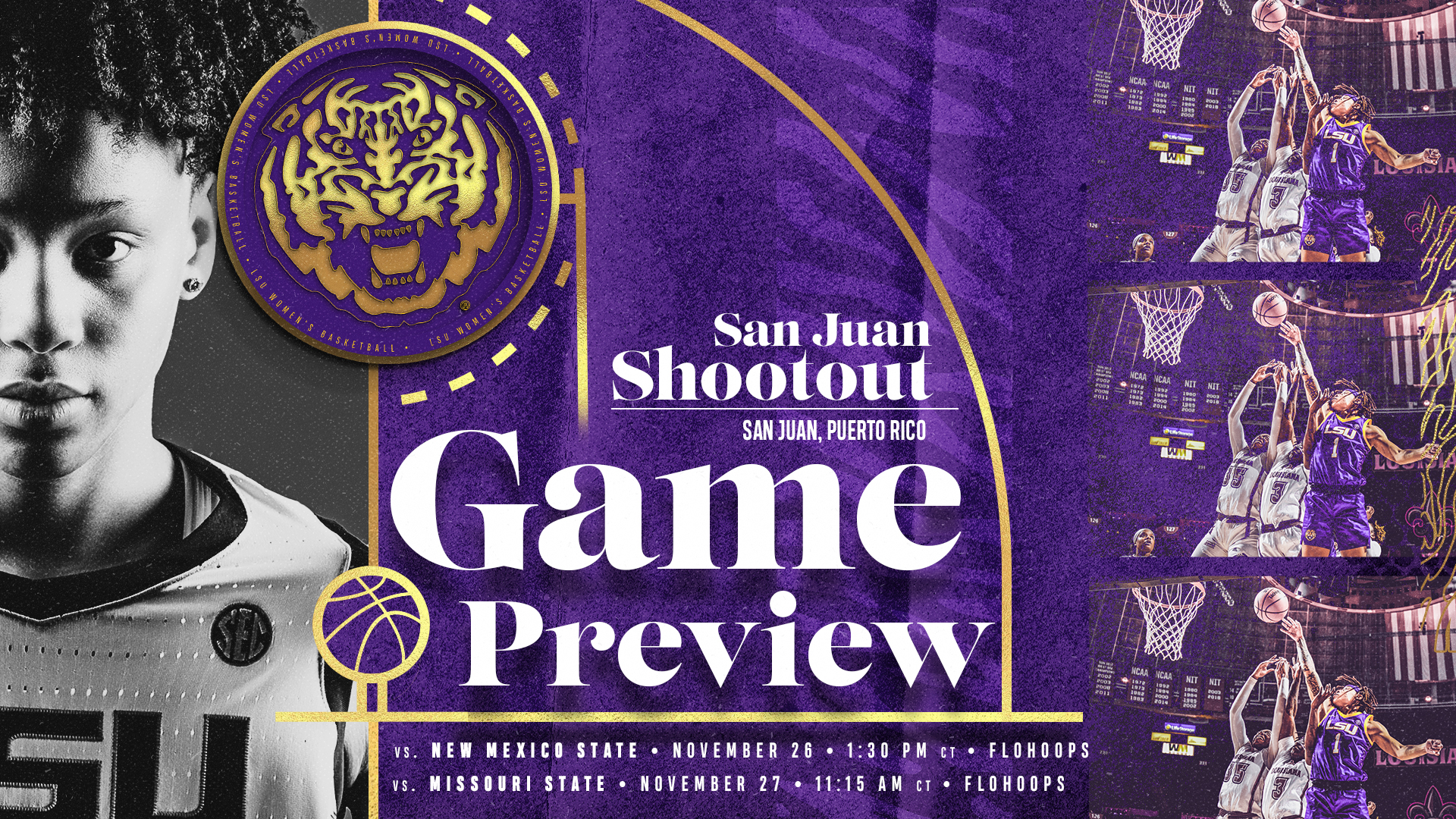 SAN JUAN, P.R. – The LSU Women’s Basketball team (3-1) is spending Thanksgiving in Puerto Rico where it is set to play games on Friday and Saturday at the San Juan Shootout.

LSU will take on New Mexico State (2-1) on Friday at 1:30 p.m. CT and Missouri State (3-1) at 11:15 a.m. CT on Saturday before heading back to Baton Rouge on Sunday. The games, which will be played in the Coliseo Roberto Clemente, are available to be streamed via Flohoops. Fans can also listen to the games on the LSU Sports Radio Network 107.3 FM in Baton Rouge or online at lsusports.net/live.

“We want to go there and win two basketball games,” said Head Coach Kim Mulkey. “Back-to-back. We don’t have a day in between. We’ve got to do a quick turnaround there.”

Before making their trip to the Caribbean on Wednesday, the Tigers picked up a big win Tuesday over Tulane, 75-58. Five Tigers scored double-digits as the Tigers were able to hand the Green Wave their first loss of the season. For the first time since the 2005-06 season, LSU has scored 70+ points in each of its first four games.

Senior guard Khayla Pointer has been the leader for LSU this season and is averaging 15.5 points and 7.8 rebounds per game. Graduate-transfer Autumn Newby has been relentless on the boards, averaging 10.3 per game. LSU has picked up key contributions from other players such as senior forward Awa Trasi, who led the team with 17 points at ULL, senior center Faustine Aifuwa, who’s back-to-back and-one finishes stymied a second half push from Tulane, and senior guard Jailin Cherry, who shined during LSU’s 15-0 second quarter run against Tulane.

Senior guard Alexis Morris has also been a key player for LSU since being granted her eligibility after transferring from Texas A&M, providing sparks on both the offensive and defensive ends. She is averaging 11.3 points per game and leads the Tigers with 9 steals this season.

Starting with New Mexico State, the Aggies are averaging 70.7 points per game this season and have victories over Western New Mexico and Incarnate Word. Their lone loss is to UTEP. Junior guard Soufia Inoussa was the Aggies’ lone representative on the Preseason All-WAC Team. Bigue Sarr, Molly Kaiser, Taylor Donaldson and Tayelin Grays all average in double figures for NMSU.

Missouri State is one of the nation’s premier mid-major programs that has made runs to the NCAA Sweet 16 in both of the past two seasons. The Lady Bears have made 15 appearances in the NCAA Tournament and reached the Final Four in 1992 and 2001. This year’s Missouri State squad has been led thus far by Jasmine Franklin who has been named the Missouri Valley Conference Player of the Week two straight weeks and is averaging 15.5 points and a nation-leading 14.5 rebounds per game. Brice Calip is averaging 11.8 points per game and is on the Naismith Award Watchlist. She was selected as the Preseason Missouri Valley Conference Player of the Year. Before taking on LSU on Saturday, Missouri State will matchup against Virginia Tech on Friday.

“When you look at mid-major programs, Missouri State is always one of the top ones,” Coach Mulkey said. “They’re very good, kind of like Florida Gulf Coast. Everybody that is a true women’s basketball fan knows those teams can beat you.”