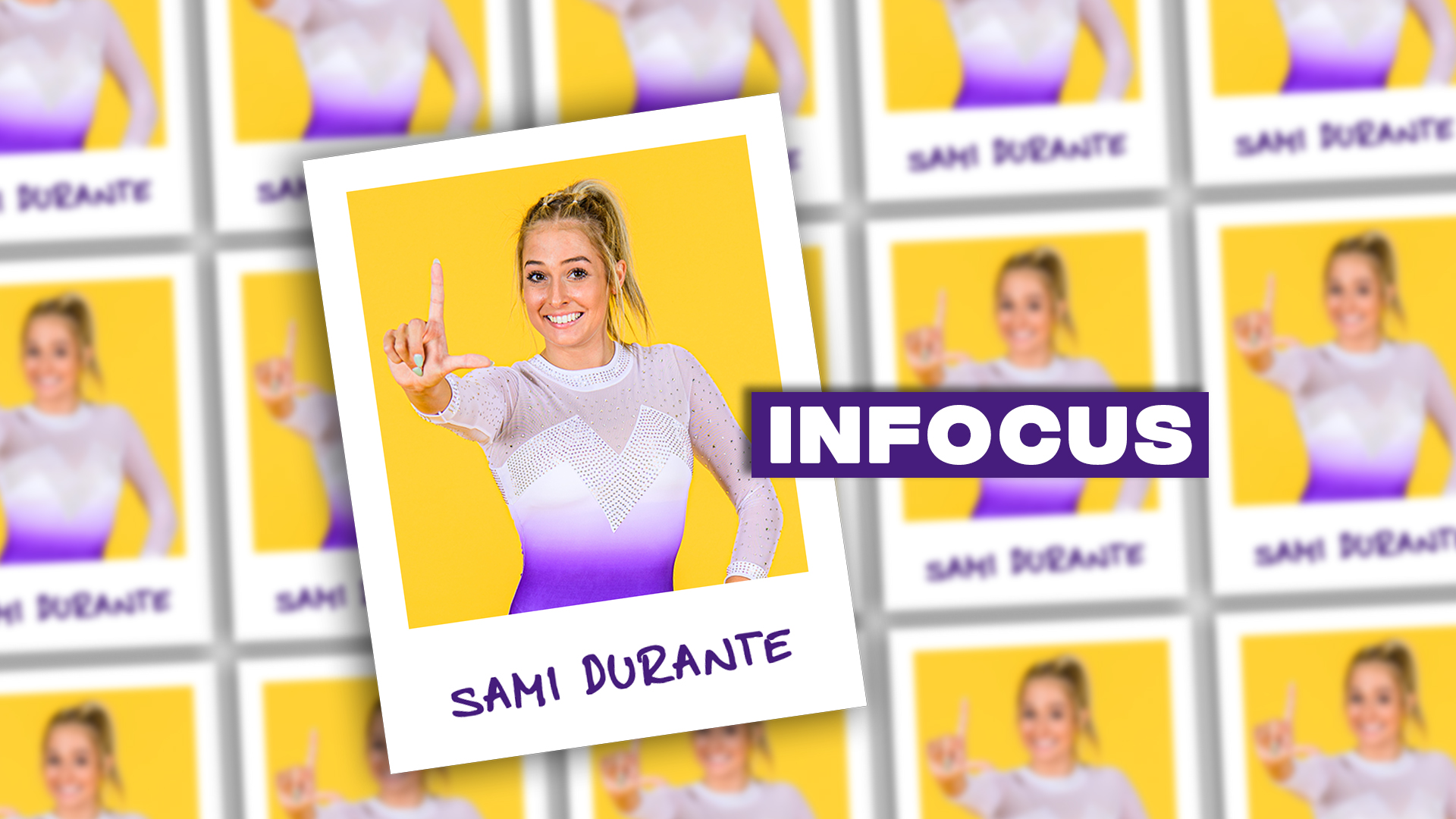 The Athens, Ga., native is the daughter of two former gymnasts. Durante’s mother coached her until she was 12 years old, which made her first years as a gymnast a little rocky. However, as her maturity developed, so did her love for gymnastics.

“When she coached me, I felt like she was personally attacking me,” Durante recalled. “Later, I realized she was only trying to make me the best I could be. I always wanted to do my best for her and have her be proud of me, and the sport was a way to do that. I think that is what made me love it more.”

The Durante family worked hard at keeping gymnastics and home separate, and now that Durante competes in college, her former coach is just Mom.

Durante competes on vault, bars and beam for the Tigers. Although she may be the strongest in bars, the sheer difficulty of beam makes it her favorite event.

“I really like to work at something instead of having it come naturally,” Durante said.

Having a positive, hardworking mindset is crucial in a sport as mentally and physically grueling as gymnastics. Training day-in and day-out prepares gymnasts to deliver their performance on meet day, but being physically prepared is usually not enough.

“At the end of the day, it’s just you out there,” Durante explained. “You have to put yourself in the right mindset of trusting your training and tuning out what everyone else is saying or doing.”

Durante started her freshman year as the leadoff on bars, but found herself in the anchor position toward the end of her career. She is honored to be trusted with such a significant role, and appreciates the ability to watch others compete before her as opposed to after.

“I feel like every spot in the lineup is important, but it is nice to be able to watch everyone go before me,” Durante said. “It gives me the confidence I need because I get to see that they can do it, so I can do it, too.”

And she does it well. Durante received her first WCGA All-American honors in the 2021 season when she finished 11th in the country. In addition to that award, Durante was a 2021 WCGA Academic All-American and has made the SEC Academic Honor Roll three times.

While the recognition is validating, Durante wants more. At the 2021 NCAA Championships, Durante fell during her bars routine.

“Even though I still got All-American, I know I can do so much better,” Durante recalled. “I was so consistent in practice the whole season, and to have that happen in the competition was really upsetting. It just makes me want to work that much harder to make sure it doesn’t happen again.”

Durante has had her fair share of adversity in the sport, starting with a pair of injuries in her sophomore year. She got a concussion, and also tore every muscle in her thumb. Her relentless work ethic blinds her from realizing when she is at the point where one more turn could end her career.

However, Durante’s sophomore year proved to be one of the most important for her because of the lessons she learned.

“It’s important to know when you need to stop,” Durante said. “For me, that was a really hard lesson to learn because I always want to keep going until I feel good about what I’m doing. That year was really important for me to realize that it’s okay to take a step back, be confident in what you have done and still be okay.”

Durante has undergone surgery in every preseason since she became a Tiger, and this season is no exception. She notes this recovery process is different than others because she is not in control of when she can come back, due to the nature of the surgery. Despite that, she never once doubted she would return for her fifth and final season of eligibility.

“I just love gymnastics so much,” Durante said. “I know that once I’m done here, I will never do gymnastics again. I couldn’t find a reason to not at least try when the opportunity presented itself. If I didn’t love the sport, I wouldn’t come back because my body is definitely ready to be done. But, it’s all worth it.”

A huge influence on Durante’s return was her teammates, who she calls her best friends. With almost all of the team returning and the addition of three freshmen, LSU Gymnastics has a firm foundation upon which to continue building.

“We’re in the gym every day together, so it’s hard not to be close,” Durante said. “The biggest thing we pride ourselves on is our team culture and loving each other through everything. We focus on building relationships as a team and as individuals, and I think that is really going to help us throughout the year.”

Gymnasts work their whole lives to get to the highest level, and part of what makes the grind so rewarding is the experiences they have with their teammates.

“I can’t even describe the feeling you get when you land, and have that moment with your teammates,” Durante explained. “There’s nothing like it. It’s the best feeling ever.”

The two-time SEC Champion thrives off of working hard and doing whatever it takes to help her team. However, the accolades are not the most important thing to her.

“Awards and scores are great, but people aren’t going to remember that when you leave,” Durante said. “They will remember the type of person you were, how you treated people and what you did for the team. I want to focus on building relationships and making sure people know they can depend on me for the rest of their lives.”

Gymnastics Returns to PMAC for 101 Showcase

Gymnastics Returns to PMAC for 101 Showcase