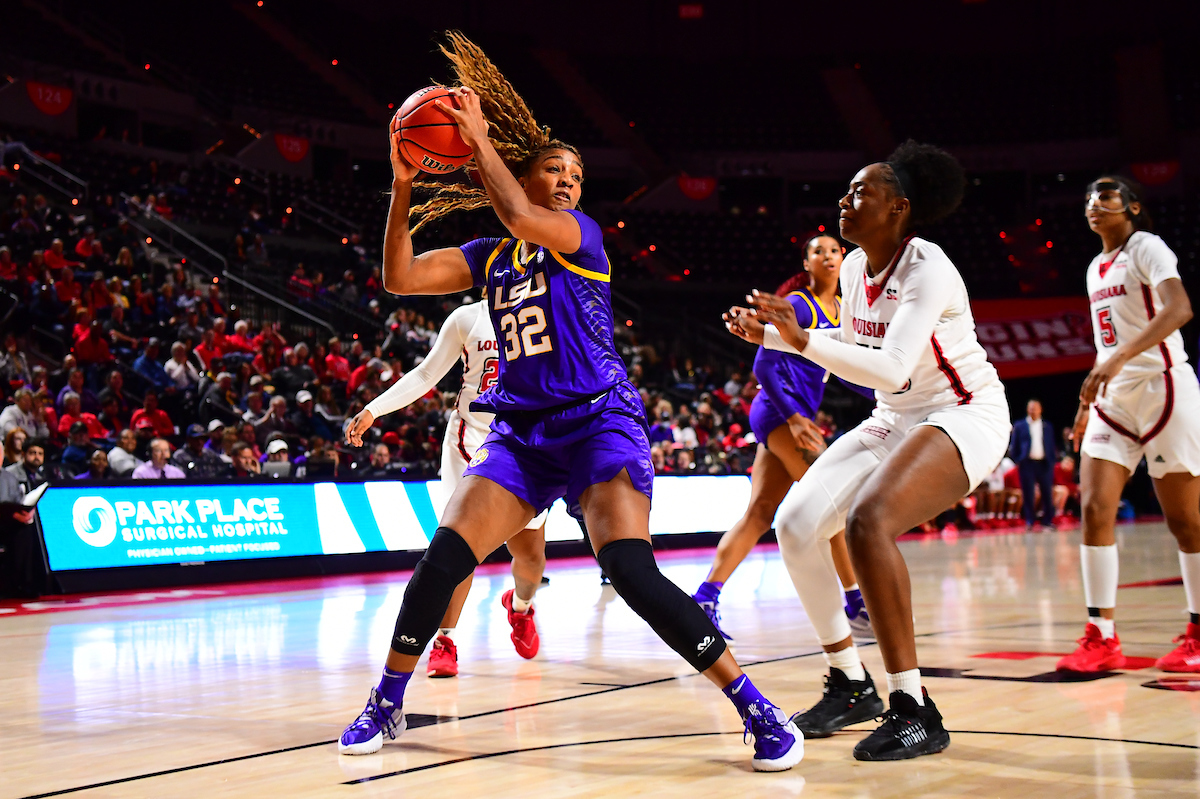 LAFAYETTE, La. – On the road for the first time this season, the LSU Women’s Basketball team (2-1) handed UL-Lafayette (2-1) its first loss of the season Thursday night in the Cajundome, 70-41.

The Tigers will host an in-state school next Tuesday in Tulane when the Green Wave come to the PMAC for a 6 p.m. CT tip. LSU will then head to Puerto Rico over Thanksgiving for two games at the San Juan Shootout.”

After seeing some time at the guard position throughout the early season, Awa Trasi was moved back to being a full-time forward when Alexis Morris was ruled eligible. In her first game back playing in the post, Trasi led the Tigers with 17 points and added 6 rebounds. Her and fellow forward Autumn Newby, who had a game-high 12 rebounds, saw extended minutes due to centers Faustine Aifuwa and Hannah Gusters being in foul trouble.

“​​We’ve got to grind things out,” Coach Mulkey said. “I thought this kid next to me [Awa Trasi], I moved her to the post when Alexis Morris got eligible last week and she’s been in the gym on her own and she was big for us tonight.”

Guard Ryann Payne had 11 points for the Tigers and Morris added 10.

“I thought Ryann was good and I thought Awa was good,” said Coach Mulkey. “I thought Autumn was good on the boards. So we’re a kind of team that it’s going to be hard to do a scouting report on us because I doubt either one of those kids (Ryann and Awa) will be on the scouting report as one of your offensive players for LSU, but they did their job tonight.”

Both teams got off to a slow start offensively. Morris made LSU’s lone bucket through the first five minutes of the game and the Tigers trailed the Cajuns, 4-3, at the first media timeout. Out of the timeout the two teams got into the flow on offense a little more. Morris scored after a crossover dribble with 3:26 left in the quarter and on the ensuing defensive possession, Payne forced a turnover and made a contested layup on the fast break. ULL tied it up at 7 with a three on the other end and later took a 9-7 lead.  Hannah Gusters recorded her first bucket of the game on an and-one, converting the free throw and the quarter ended with the teams tied at 10. The Tigers forced 10 turnovers in the quarter, but shot only 25-percent from the field.

Payne started the second quarter with her second steal of the game and finished it on the other end with another fast-break layup. Both of LSU’s bigs, Aifuwa and Gusters, committed their second fouls early in the second quarter, giving Newby and Trasi extended minutes. With 5:48 remaining, Awa Trasi made an excellent move to get by her defender and converted a layup off of the window to give LSU a 17-12 lead into the media timeout. Out of the timeout, Payne hit a three from the right wing to give the Tigers an eight-point lead thanks to an 8-0 run. Trasi fought through contact to make a contested layup to give the Tigers a 24-14 lead on the heels of a 12-2 run. The half ended with three-pointers from Pointer and Trasi as the Tigers finished the half on a 18-2 run, extending their lead to 30-14.

After a stagnant first quarter, the Tigers outscored the Cajuns in the second, 20-4, and shot 44.4-percent from the field, including going 3-4 from long range. Payne and Trasi led the Tigers with 7 points each in the quarter. LSU’s tight first-half defense caused 17 turnovers and limited ULL 22.7-percent shooting the ball.

Trasi continued to play well for the Tigers, leading the offense in the third quarter. Using quality ball movement, the Tigers were able to get multiple players good looks on the offensive end and LSU continued to pull away from ULL. On a fast-break after a ULL air ball, Jailin Cherry missed a layup, but Pointer was there on the follow and got fouled on the putback. She made the bucket after a hard foul and sunk the free-throw to give the Tigers a 51-29 lead. The Cajuns made four free-throws to end the quarter as LSU led, 51-33, heading into the fourth.

With a large lead, LSU slowed the pace of the game down. Freshman Timia Ware made the most of her time on the floor as she was able to score 4 points in just 4 minutes as her and some other players such as Amani Bartlett, Ajae Petty, Sarah Shematsi and Emily Ward were able to get some minutes in the 29-points victory.