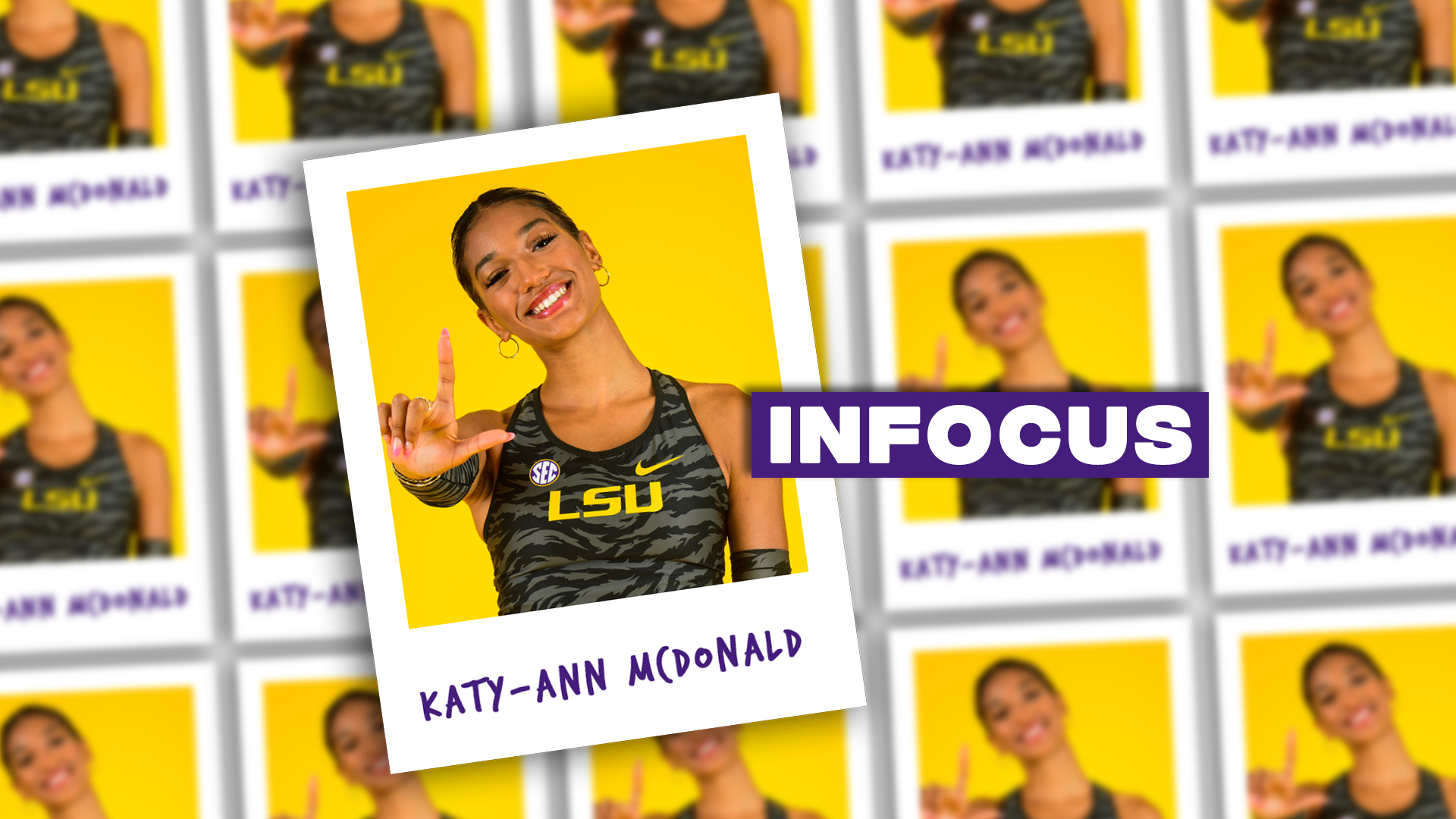 What do you do when you lose yourself in the one thing that has defined your whole life?

A question senior Katy-Ann McDonald had to answer when rock bottom hit.

The London, England native came to America for college because she wanted something different from what she knew. While her first semester away from familiarity, family and friends was difficult, McDonald’s excitement for her new journey outweighed any worries about what was to come.

“I remember when I first left and was getting on the plane, I was like, ‘Oh my gosh. I can’t believe I’m doing this. This is crazy,’” McDonald recalled. “Coming to Louisiana, you cannot get any more different than London. LSU was the only school I visited, and it was amazing. I fell in love with it. There’s no other place like this.”

McDonald started running young, and it soon became something so innate and ingrained in her. Once she got to college, McDonald was faced with a question that she had never considered before: did she truly love running, or was she doing it because it was what she had always done?

When she arrived at LSU, McDonald quickly realized how different the LSU sports culture was from anything she had experienced before. McDonald was now part of the group that ate, slept, and breathed sports.

“I felt like I was being reduced to just my sport, and everything else that I am was being pushed aside,” McDonald said.

The relationship between McDonald and her sport became difficult to manage, along with everything else she valued.

When McDonald returned home for holiday break in December of 2020, she found herself paralyzed by a severe depressive episode. The bed-ridden weeks turned into months of disconnection from herself, along with her sport, hobbies and friends.

“I hated running. I hated school. I hated everything,” McDonald said.

After spending time in the hospital in London and in intensive therapy upon returning to LSU, McDonald slowly started to improve. She credits her strong support system for propelling her into a recovery that happened sooner than it would have without it.

While that season of her life was one of the hardest, McDonald believes the experience was necessary and invaluable.

The two months away from running made McDonald realize she genuinely loves the sport, and what needed to change was her mindset. Going into the 2021 outdoor track season, McDonald’s coach, Houston Franks, used his expertise to meet her where she was at, and he physically prepared her to be the best she could be.

“My base was gone. It was demoralizing,” McDonald explained. “We did a lot of speed work and tried to build a base while we were at it. My season was going fine; I wasn’t expecting much because of everything that happened.”

She went from having low expectations to exceeding them. After running consistent 2:05 and 2:06 races for most of the spring, McDonald brought something different to the NCAA East Preliminaries. In the first round of the 800 meters, she ran a personal best of 2:02.54, and then just two days later she set another personal record of 2:01.67 in the finals. After not being able to get out of bed just months before, McDonald had punched her ticket to the NCAA Championships, and claimed the No.5 spot on LSU’s all-time performance list.

A short summer break later, McDonald continued her breakout performances in the 2021 cross country season. She registered two top-two finishes during the regular season, and became just the second LSU woman to qualify for the NCAA Cross Country National Championships when she placed sixth overall at the NCAA South Central Regional.

The key? Her mental health.

“I knew I was in good shape, but didn’t know that was coming,” McDonald said. “I tried to stay relaxed because every time I got anxious, I did worse. I went in with the attitude that I was going to enjoy it, not be too stressed about it, and not view it as a punishment. I’ve really had to focus on making sure that I’m enjoying it, and not thinking about a career beyond where I am right now.”

Living in the present moment, staying in tune with herself and actively pursuing balance each day are what have kept McDonald above waters.

“I’m very self-aware of everything around me and within me,” McDonald said. “I’m able to catch myself before I drift into a place I don’t want to be in.”

While her sport has consumed her at times, McDonald prides herself in knowing that she is someone who has always had outside interests. Her teammates know her as not only the incredibly talented runner, but also the journalist, fashion connoisseur and music-lover.

“My goal is to try to run professionally after college and see where that takes me because I really do love it,” McDonald said. “But, this past year, I’ve applied to more internships for next summer, and I’ve fallen in love with writing again like I did when I was younger.”

McDonald credits LSU professor Len Apcar for reigniting her inspiration, as his support has motivated her to continue exploring all that journalism has to offer. She created her own magazine titled Eaux Magazine, of which she is the editor-in-chief. Her roommate, LSU Women’s Tennis player Anna Loughlan, and Polina Shchennikova, former University of Michigan gymnast and current LSU graduate student, both serve as co-founders with McDonald. The three, along with other writers and designers, formed a website where they cover mental health, fashion, current trends, and many more topics.

“I felt like our type of magazine was missing from the LSU community, so that’s why we decided to do it,” McDonald said. “I’ve been trying to focus on other stuff that isn’t just running, which has helped my mental health a lot.”

Just like reaching the highest level of her sport took a lot of practice, so has her ability to sustain balance and the current positive, strong mental state she is in.

“I came into LSU not even knowing what a GPA was because everything is so different here,” McDonald said. “Now, with more time and experience, I’m very content with where I am right now. I don’t ignore outside factors, but they aren’t as important to me anymore.  I’m looking inward and what I need to do for myself, which is something I didn’t really do before.”

Check out McDonald’s magazine here, and another article she wrote about student-athlete identity.