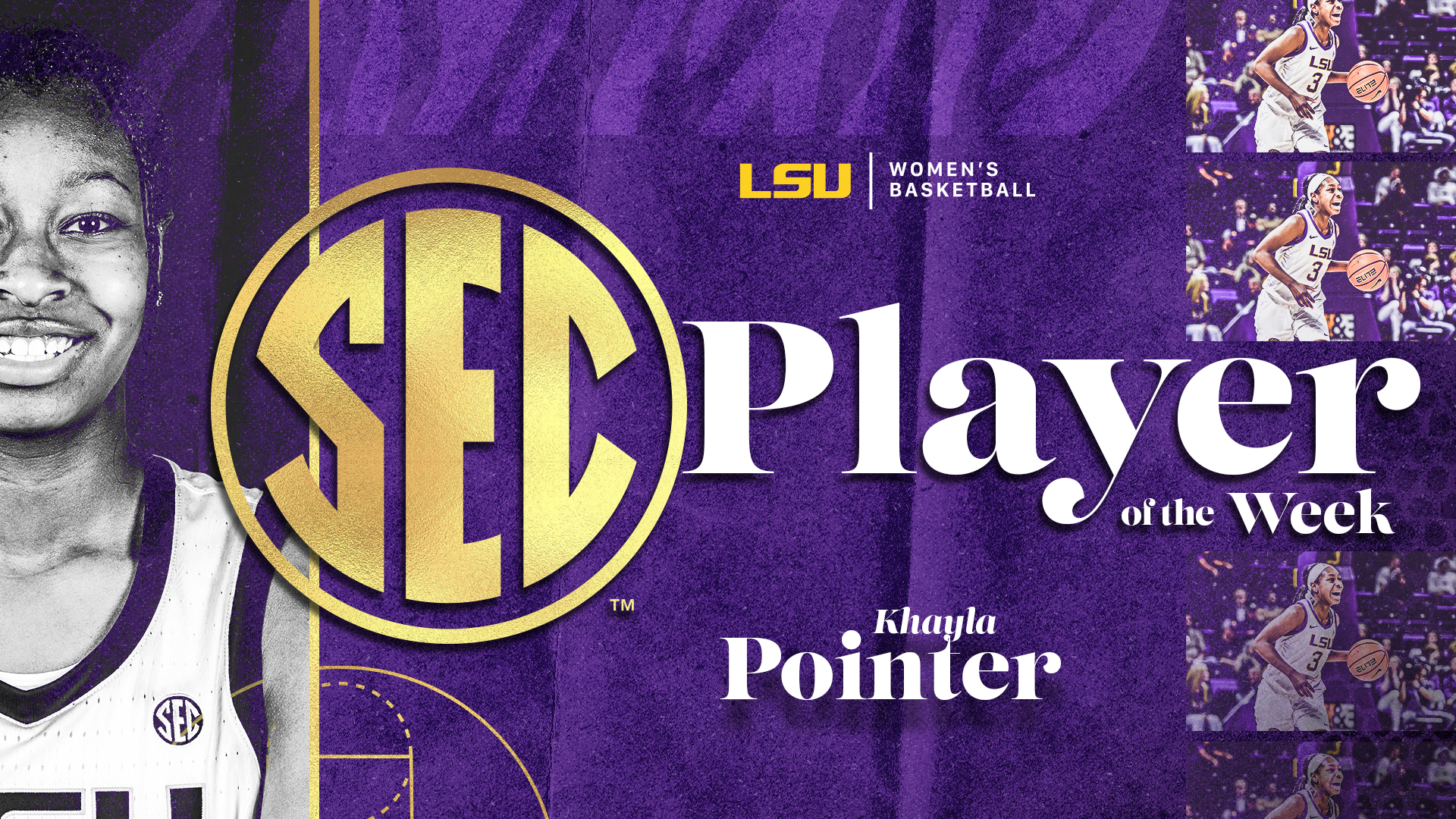 BIRMINGHAM, Ala. – LSU Guard Khayla Pointer has been named the SEC Women’s Basketball Player of the Week after posting a triple-double and a double-double in the opening week of the season for the Tigers.

This is the second time in Pointer’s career she has been named SEC Player of the Week. The 5-7 guard was named to the All-SEC Team last season and is on the Preseason Wooden Award Watchlist. She shot 53-percent from the field in the opening week of the season and averaged 19.5 points (No. 2 in the SEC), 10.5 rebounds (No. 2 in the SEC) and 9 assists (T-No. 1 in the SEC). Throughout the young the season Pointer has averaged 38.14 minutes played to lead the conference.

The Marietta, Georgia native became just the third player in program history, joining Katherine Graham (2010) and Cornelia Gayden (twice in the 1994-95 season), to notch a triple-double when she did so in the season opener against Nicholls. Pointer went for 16 points, 13 assists and 11 rebounds, leading the Tigers to victory. Pointer is also one of just three active players in the SEC to have a triple-double in their career along with South Carolina’s Aliyah Boston and Tennessee’s Tamari Key.

“I got to see history too,” Coach Mulkey said after the game. “I’ve had triple-doubles in my career as a head coach, but here in the first game, I’m proud of her.”

“I think I found out (I was close) somewhere in the third quarter,” Pointer explained. “We were out there having fun. I honestly didn’t notice. I didn’t notice when the assists happened or the rebounds, except for when it got to the end. My teammates do a great job of making me look well. I set them up for open shots and they knock down the shots.”

Pointer followed up her triple-double performance with a double-double in the second game of the season against FGCU. She played all 40 minutes and finished the game with 23 points and 10 rebounds, adding 5 assists in the 88-74 loss to the Eagles. Sunday’s double-double was the sixth of Pointer career.

LSU is set to hit the road for the first time of the Coach Mulkey Era when the Tigers face Louisiana-Lafayette at 6 p.m. CT Thursday in the Cajun Dome. Tulane will come to town next Tuesday, November 23 at 6 p.m. for LSU’s return to the PMAC before heading to Puerto Rico for the San Juan Classic over Thanksgiving.