Darius Days with one of his five treys to help LSU rally in the second half. 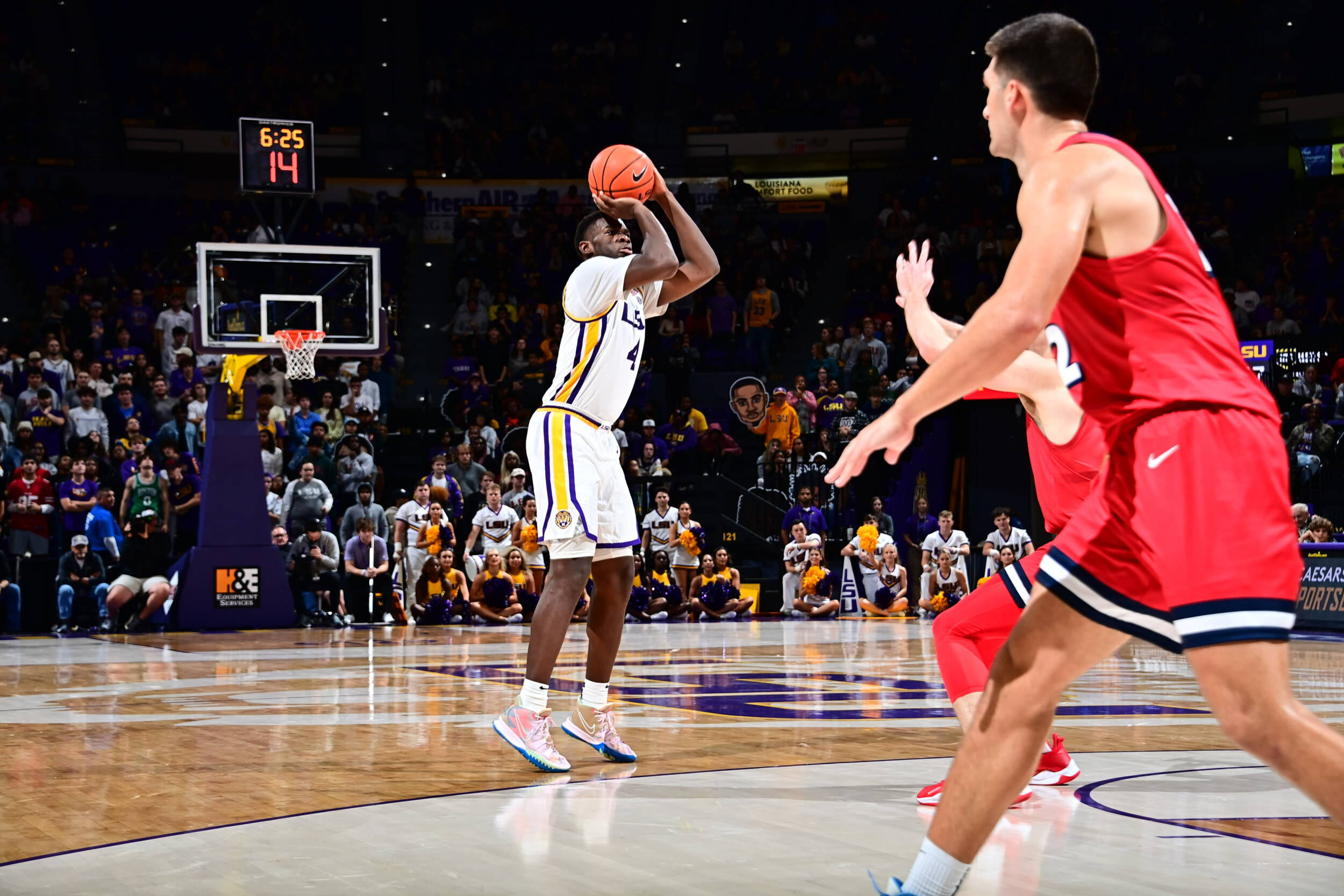 BATON ROUGE – The LSU Tigers used a 27-6 run over the final 7:06 of the game to pull away from a stubborn Liberty team by a score of 74-58 Monday night at the Pete Maravich Assembly Center.

The Tigers are now 3-0 on the young season, holding all three teams under 60 points. LSU, trailing at the half the last two games, has outscored its three opponents by a score of 150-73 in the final 20 minutes combined.

LSU was down 52-47 after Liberty (1-1) made two free throws off an LSU technical foul. Liberty led by one, 26-25, at the intermission and by as much as seven in the second half of play.

But a charged-up LSU team got a turnover on the ensuing possession and Darius Days took an Eric Gaines pass to cut the Liberty lead to 52-50 with 6:27 to play. After a couple of turnovers and missed shots each way, Brandon Murray took a Gaines pass and hit a trey to give LSU the lead for good at 53-52 with 4:52 to play.

Liberty finally got two free throws at the 4:14 mark to make it a three-point game, 57-54, but then Days hit a three and Xavier Pinson hit Efton Reid in the corner for a three-pointer and Days followed a Liberty miss with his fifth trey of the game to make it 66-54 sending the LSU crowd into a frenzy.

Days hit 4-of-5 treys in the second half to lead LSU with 26 points, while Reid put in 13, hitting 6-of-9 from the field with the one trey. Pinson and Gaines each had 10 points and the pair combined for 10 assists and seven steals.

ASUN Player of the Year Darius McGhee had 22 points while Brody Peebles had 12 points and Keegan McDowell 10. McGhee only hit 2-of-11 three-point field goals as he was under pressure by a rotating set of LSU guards.

The Flames out rebounded LSU, 35-34, but Liberty had a 25-17 advantage at halftime and 8-4 on the offensive boards. LSU only allowed Liberty one offensive board in the second half.

LSU forced 21 turnovers and had a 23-14 advantage in points off turnovers and 20-2 on fast break buckets. LSU had 16 steals in the contest.

The Tigers and McNeese game Thursday night will be broadcast on the LSU Sports Radio Network affiliates and streamed on SECN+. Tickets for the game will be available at the LSU Athletics Ticket Office and online at LSUTix.net.

“We played so hard defensively. That’s three-straight teams we’ve held under 60 points. I thought we were jittery on offense in the first half. We just need to calm down we took some uncharacteristic shots. We’re falling for their eye candy. We’re trying to take the first decent look we can get instead of getting a great look and so I thought we settled down in the second half. Obviously, (Darius) Days was tremendous. Efton Reid was great. He got in foul trouble in the first half and came back and was huge in the second half. We had to adjust some ball screen coverage, but he was huge. I thought Eric Gaines’ defensive intensity and his energy totally changed the game for us. He had five steals. The difference was we gave up eight offensive rebounds in the first half and one in the second half. I think we’re down eight on the glass and we ended up losing it by one, but we outrebounded them in the second half. We’re just a lot better chasing balls down and doing what we needed to do with the little things defensively and rebounding.”

On responding to Liberty runs…

“We made our free throws. We weren’t as solid as we need to be on defense; we had two fouls where we reached and gave them four points. We didn’t turn the ball over offensively; most of our turnovers were offensive fouls. I thought the crowd was great, we fed off the energy; the students were great. A 6:00 p.m. tip-off is a lot harder to get to, but I thought the crowd was really good.”