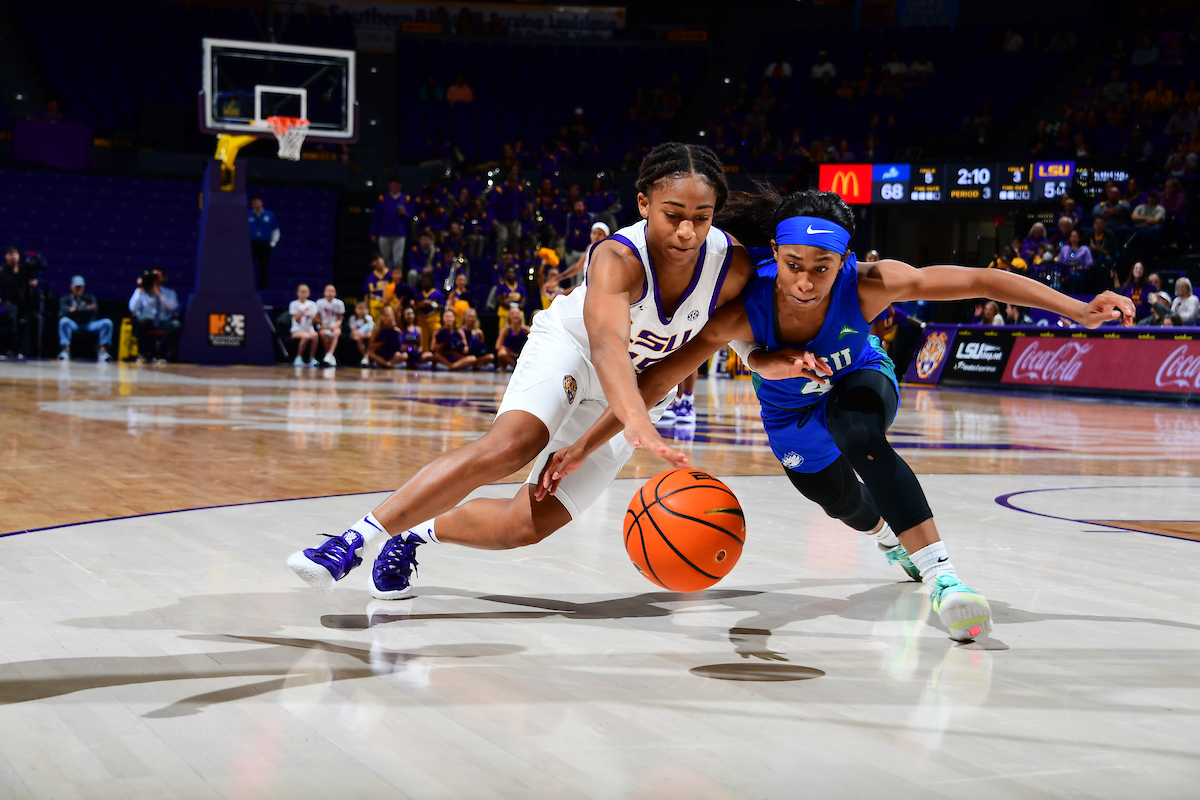 BATON ROUGE – Florida Gulf Coast’s (3-0) three-point attack proved too much for LSU Women’s Basketball (1-1) Sunday in the PMAC as the Tigers fell to the Eagles, 88-74.

FGCU shot 56-percent from beyond the arc and made 14 three-pointers on its way to handing LSU its first loss of the season. Kierstan Bell, who is on the Watchlist for the Becky Hammon Mid-Major Player of the Year, led FGCU with a game-high 32 points and both Tishara Morehouse and Kendall Spray scored 17. Where Bell and Spray relied on the three ball, Morehouse used a dribble-penetration to get to her buckets, recording all of her seven made shots inside the paint. The Eagles were able to build an 18-point lead during a third quarter run that was too much for the Tigers to overcome despite their best attempts.

FGCU used a third quarter run to build an 18-point lead that proved to be too much for the Tigers to overcome. LSU was able to reduce it to nine points with 6:51 remaining in the game and the defense got stops, but the Tigers were unable to convert offensively to close the gap.

“We had made five stops there in a row defensively, and then we just couldn’t go execute,” said Head Coach Kim Mulkey. “We couldn’t go score the ball. We couldn’t get it in the hands of the people we needed to. That is going to come with time, playing with each other. The effort was fine, the defense was not good.”

Guard Alexis Morris, who transferred to LSU from Texas A&M, was able to make her first appearance for the Tigers after being cleared to play. Morris’ impact could be felt on both the offensive and defensive ends of the court. She finished with 12 points, 5 rebounds, 4 steals, 2 blocks and 2 assists in her season debut.

Guard Khayla Pointer, who recorded a triple-double during the season opener, had a double-double on Sunday with a team-high 23 points and 10 rebounds.

The Tigers will hit the road for the first time this season on Thursday when they head to the Cajun Dome to take on Louisiana-Lafayette at 6 p.m. CT.

Bell began the first quarter for FGCU with two quick 3 pointers helping the Eagles take a 16-9 lead. Pointer led the Tigers with 9 first quarter points, including a crisp floater inside the paint. Awa Trasi provided some spark off the bench with 4 points of her own. The Tigers used a 6-0 run late in the quarter to bring the score to 22-20. The quarter was capped off by an excellent and-one play by Pointer, who converted the free throw and finished the opening quarter with 9 points. After trailing by as many as 8 in the first quarter, the Tigers were only down one, 24-23, when the second quarter began,

Morris began the second quarter with an defensive highlight as she chased down FGCU’s Karli Saey, a former Tiger making a return to the PMAC, and rejected her layup attempt. The teams went back and forth throughout the first four minutes of the second quarter. With the game tied at 33, Morris recorded a steal and led a fast break, finding Pointer in the left corner for a three, forcing a FGCU timeout. That turned out to be LSU’s only three in the game. FGCU finished the half on a 13-3 run to take a 46-33 lead into the break.

FGCU came out of the locker room shooting the ball well and playing tough defense. Through the first six minutes of the quarter, the Eagles built an 18-point lead over the Tigers. Bell had 15 of her final 32 in the third quarter as FGCU outscored LSU, 24-13, in the third quarter.

The Tigers punched back in the fourth quarter behind an energetic Sunday crowd. After trailing 16 at the beginning of the quarter, LSU made it a 9 point game with 7:51 remaining. The Tigers got stops on five consecutive possessions, but were unable to turn any of those stops into offense to reduce the Eagle’s lead any further. Both teams went scoreless the final two minutes of the game.