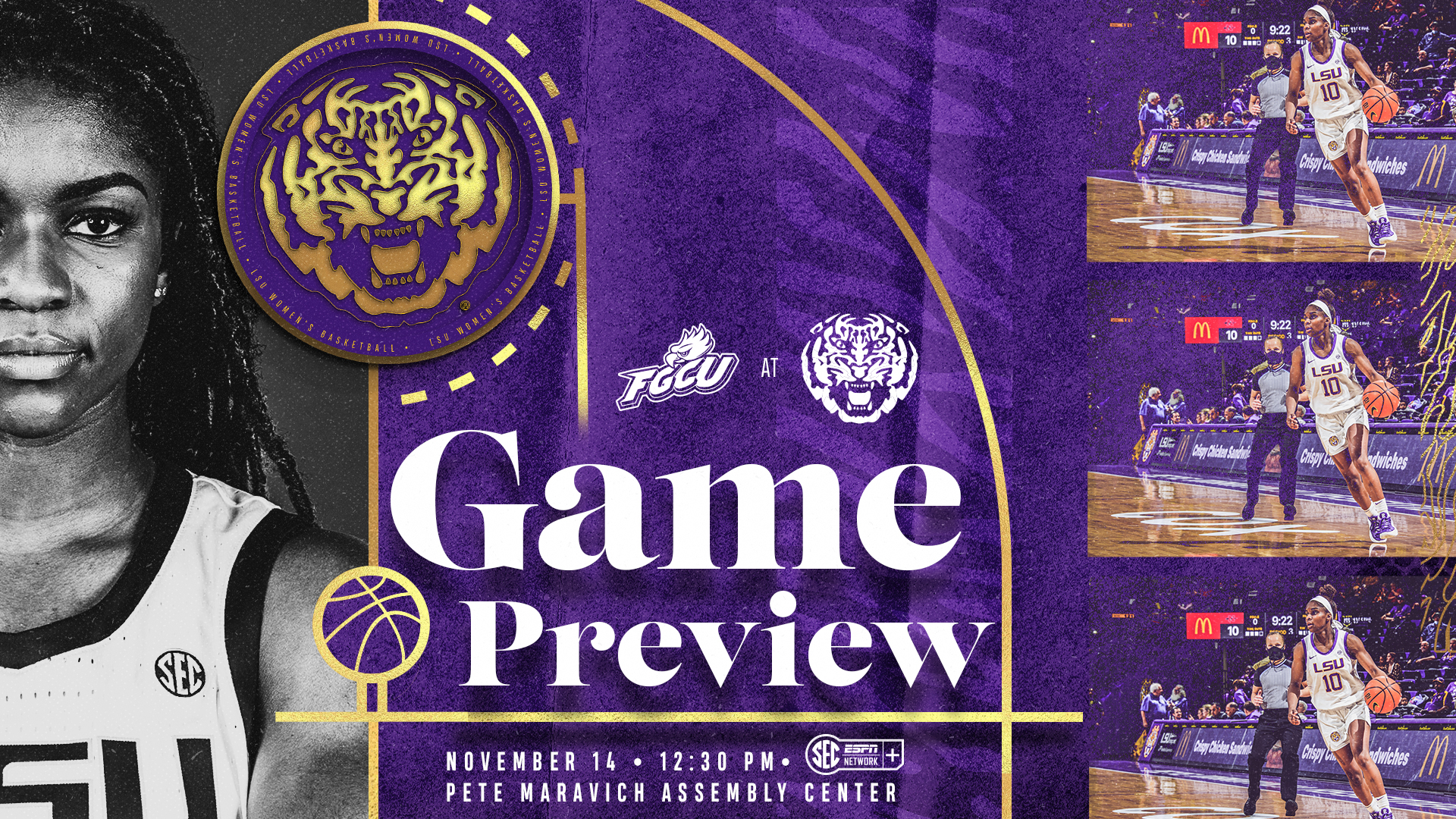 The Tigers opened the Coach Kim Mulkey Era on Tuesday with an 82-40 win over Nicholls. Guard Khayla Pointer went for 16 points, 13 assists and 11 rebounds, becoming the third player in program history to record a triple-double. Center Faustine Aifuwa went over 1,000 points for her career. All five starters for the Tigers recorded double-digit points, led by Center Hannah Gusters who had 19 in her LSU debut.

As a team, LSU had 23 assists against Nicholls, the most by any SEC team during a season opener this year. The Tigers shot 53.1-percent from the field which included going 6-14 from beyond the arc.

Now the Tigers are getting ready to welcome to a talented Florida Gulf Coast team to Baton Rouge. Sunday’s matchup will feature two of the three winningest active coaches in NCAA Women’s Basketball. After winning her LSU debut, Coach Mulkey has 633 career head coaching victories to her name, sitting only behind UCONN’s Geno Auriemma. FGCU Coach Carl Smesko is right behind Mulkey at No. 3 with 582 victories in his career after starting this season 2-0. This is the first time Coach Mulkey and Coach Smesko will matchup against each other.

Florida Gulf Coast is known for shooting three-pointers under Coach Smesko, who is in his 20th season in Fort Meyers. The Eagles launched 50 threes, making 14 in their season opening win over Florida Memorial. In Friday’s win over Temple, FGCU was 8-36 from deep range. A key for the Tigers will be being able to defend the perimeter, forcing contested shots and grabbing rebounds to limit second chance opportunities.

“We pretty much feed off of our defense,” Pointer said. “You see us, we’re out there flying around like little gnats. We’re trying to get some steals. As soon as we get the ball, on offense we’re going. We go off of our defense. Breaking on passing lanes, making sure we’re pressuring the ball, things like that usually force turnovers and we’re going the other way.”

With FGCU’s tallest player standing at 6-1, LSU has a size advantage, but the Tigers’ bigs such as Aifuwa, Gusters and Autumn Newby will be forced to play more perimeter defense than they are typically used to.

“My lineup can change every game depending on who we play,” said Coach Mulkey. “Our next game, oh you’re fixing to see threes coming out of the woods so how are we going to defend that with our bigs? It’s going to be a challenge for us.”

Kierstan Bell is Florida Gulf Coast’s top player. She is one of the top players in the nation too, rated as the No. 16 player in the country in ESPN’s preseason ranking. She averaged 24.3 points, 10.6 rebounds, 2.7 assists, 2.3 blocks and 1.9 steals for the Eagles last season. She was the ASUN’s Player of the Year last season and was selected as the Preseason Player of the Year heading into this season. TK Morehouse is another standout player for FGCU who was an All-ASUN First-Team player a year ago with 17.7 points, 4.0 rebound, 3.7 assists and 1.5 steals per game. Both Bell and Morehouse are on the Preseason Watchlist for the Becky Hammon Mid-Major Player of the Year.

Former Tiger Karli Seay joined FGCU this season as a graduate transfer and has average 9 points throughout the first two games of the season, shooting at a .412 clip.

FGCU was picked by the ASUN Media and Coaches to win the conference this season. The Eagles are coming off their seventh all-time NCAA Tournament appearance and will provide an early season test for Coach Mulkey and the Tigers.