Soccer Travels To Memphis For NCAA First Round Match 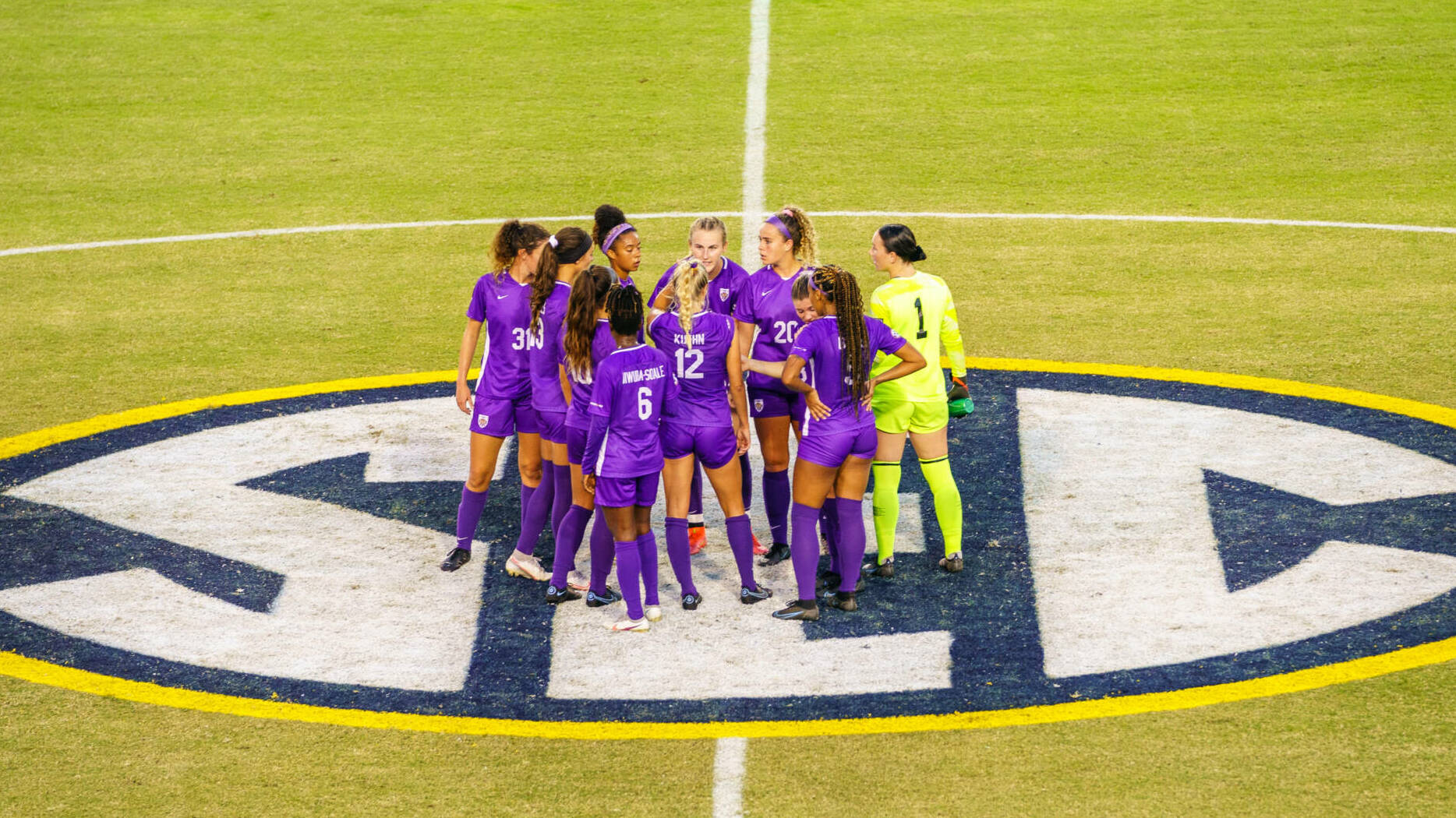 Baton Rouge, La. – The LSU soccer team will face off against the No. 18 Memphis Tigers in the first round of the NCAA Tournament on Sunday at the Billy J. Murphy/Soccer/Track & Field Complex in Memphis. First kick for the match is set for 1 p.m. CT, and the game will be streamed on ESPN+.

How To Watch
The match will be streamed on ESPN+. In order for fans to watch they will need to have a subscription to ESPN+, which can be purchased for a monthly rate of $6.99. Visit plus.espn.com and subscribe to ESPN+ to have access to Sunday’s match.

Players w/ Experience at the NCAA Tournament
Seven players from LSU’s 2018 trip to the NCAA Tournament are still on the roster. Chiara Ritchie-Williams, Reese Moffatt, Shannon Cooke, and Tinaya Alexander started both matches of the 2018 NCAA Tournament, and Tiana Caffey and Molly Thompson played big minutes off the bench in those two games. Meghan Johnson served as a reserve in 2018.

Seven players that have since transferred in to LSU have NCAA tourney experience as well. Alesia Garcia scored three goals in two games at the 2020 NCAA Tournament for the University of New Mexico to help the Lobos advance to the Round of 32. Tilly Wilkes and Brenna McPartlan have now been to three straight national tournaments; the duo played helped South Alabama advance to the tournament in 2019 and 2020 before playing a part in LSU’s run this fall. Wilkes scored a goal in South Alabama’s 1-0 win over Colorado earlier this spring at the NCAA Tournament.

Athena Kuehn (Minnesota/2018), Lindsi Jennings (Northern Colorado/2019) are the other two transfers with Division I NCAA Tournament experience. Savannah Mills (2018 & 2019) and Mollee Swift (2019) have played in the Division II NCAA Tournament while playing for Sian Hudson at the University of Colorado at Colorado Springs.

LSU’s 2021 Season
The Tigers reeled off eight straight wins to begin the 2021 season. Included in those eight wins to begin the season were ranked wins over No. 15 USF, No. 19 UCF, and No. 21 Arizona State. The eighth win of the season came in the SEC opener versus Mississippi State. The Tigers prevailed by a tally of 2-0 in front of a school record crowd of 3,021 fans at LSU Soccer Stadium. That win pushed LSU’s school record win streak to 11 matches, which dated back to the 2021 spring season

The Tigers hit a little bump in the road following the Mississippi State match as they lost five in a row. With four games remaining on the conference schedule, LSU needed points and treated the games as league finals. Fast forward to two weeks later and the Tigers had won three of those four matches to clinch a bid to the SEC Tournament. LSU beat Kentucky (1-0), South Carolina (4-0), and No. 4 Arkansas (4-2) to pick up crucial points that led to a berth in the conference tournament. The win over No. 4 Arkansas was the highest ranked win in program history.

The Tigers headed to Orange Beach with a first round match against Georgia that had huge NCAA Tournament implications. A loss might have knocked the Tigers out of the national field of 64 teams, but the Tigers battled to a nil-nil draw against the Bulldogs before advancing on penalties to solidify their spot at the NCAA event. A close 2-1 to No. 5 Arkansas followed in the quarterfinal round of the SEC Tournament for the Tigers.

Now, the Tigers will take to the pitch for the first time since November 2 on Sunday against the Memphis Tigers in the first round of the NCAA Tournament.

Season Awards
Tinaya Alexander became the first LSU player since 2018 to be named to the All-SEC First Team this year; she has accumulated a career high 24 points this season on nine goals and six assists. She was named the SEC Offensive Player of the Week on October 29 after her two goal, one assist performance in LSU’s 4-2 win over No. 4 Arkansas on October 28.

Alesia Garcia was named to the Top Drawer Soccer Team of the Week on September 8 after she racked up five points (2g, 1a) as LSU swept wins over Arizona and No. 21 Arizona State on the road.

Double Digit Wins
LSU has won 11 times this year marking the 12th time in program history that the Tigers have eclipsed the 10-win barrier since the program’s inception in 1995. The school record for the most wins in a season is 15, which has happened twice (2000 & 2009).

Goals From Everyone
LSU is enjoying one of its best offensive seasons over the last decade with 40 goals scored this year. It matches the most goals scored by the Tigers since 2009 when LSU scored 56 that season; 40 goals were also scored during the 2015 season.

The 40 goals in 19 matches this season have come from 14 different players, which matches the school record for most goal scorers in a season; that feat was also accomplished in 2003. Tinaya Alexander (9) and Alesia Garcia (6) are the team leaders in that category. Molly Thompson (4), Athena Kuehn (3), Shannon Cooke (3), Rammie Noel (3), Maddie Moreau (2), Riley Dixon (2), and Meghan Johnson (2) have all scored multiple goals while Mollee Swift, Lindsi Jennings, Grace Haggerty, Jordan Johnson, and Wasila Diwura-Soale all have one apiece. The Tigers also forced an own goal off a corner against Mississippi State.

Ranked Wins Under Sian Hudson
LSU will enter Sunday’s match against No. 18 Memphis with an all-time record of 5-5 against ranked opponents under Sian Hudson. Four of those five ranked wins (No. 15 USF, No. 19 UCF, No. 21 Arizona State, No. 4 Arkansas) have come this season and helped LSU earn a bid to the NCAA Tournament. The 4-2 win over No. 4 Arkansas on October 28 was the highest ranked win in program history. LSU’s first ranked win with Hudson at the helm came against No. 14 Ole Miss at the 2020 SEC Tournament.

Series History/Scouting Memphis
Sunday’s match against Memphis will mark the eighth meeting between the two teams. The series dates back to Sept. 15, 1995 as LSU won a 5-0 contest in Baton Rouge. The most recent matchup was in 2012 with LSU beating Memphis by a tally of 2-1 in Baton Rouge. Three matches in series history have been played in Memphis; LSU won on the road in 1996, and Memphis won home tilts in 2010 and 2011.

Memphis boasts a stingy defensive having only allowed 10 goals in their 19 matches played this season. They’ve earned 11 shutouts and have only conceded two or more goals twice this season. Elizabeth Moberg has a GAA of 0.53 this season, but has not been tested a lot as she is only making 2.37 saves per match.

Offensively, Memphis has four players that have 10 or more points on the season led by Tanya Boychuk’s 15 (6g & 3a). The other three players that have double digit points are Jocelyn Alonzo (5g, 4a), Saoria Miller (5g, 3a), and Aubrey Mister (5g, 1a).

Mollee Swift keeps climbing the charts in a number of areas as well. Her 156 saves in an LSU uniform rank as the seventh most in LSU history, but she has a ways to go before she catches up to Roby DesOrmeaux who is in the sixth slot with 183 saves. Swift’s 18 wins in net rank as seventh most in school history, and her career GAA of 1.06 in a Tiger uniform ranks as the second lowest average over a career currently behind Mo Isom’s school record GAA of 0.86. Swift registered the 10th solo shutout of her career in LSU’s opening round match of the SEC Tournament against Georgia as she made nine saves in that contest before helping LSU advance in penalties. Swift’s save percentage of .809 is currently that highest readout in program history as she has racked up 157 saves while allowing 37 goals in 36 matches played for LSU.

Tinaya Alexander is tied for the No. 2 slot in program history with 22 career assists; she picked up her team high sixth assist of the season in LSU’s last game against Arkansas on November 2. She had seven assists her freshman year, six during her sophomore campaign, three last year, and five this season. She’s also in sole possession of the No. 10 spot in the LSU record book with 64 career points thanks to 21 goals and 22 assists.