Nine former student-athletes and coaches were inducted Friday night into the LSU Athletics Hall of Fame, and they will be recognized in Tiger Stadium Saturday night during the LSU-Arkansas football game.

by Bill Franques
Watch the Ceremony +0 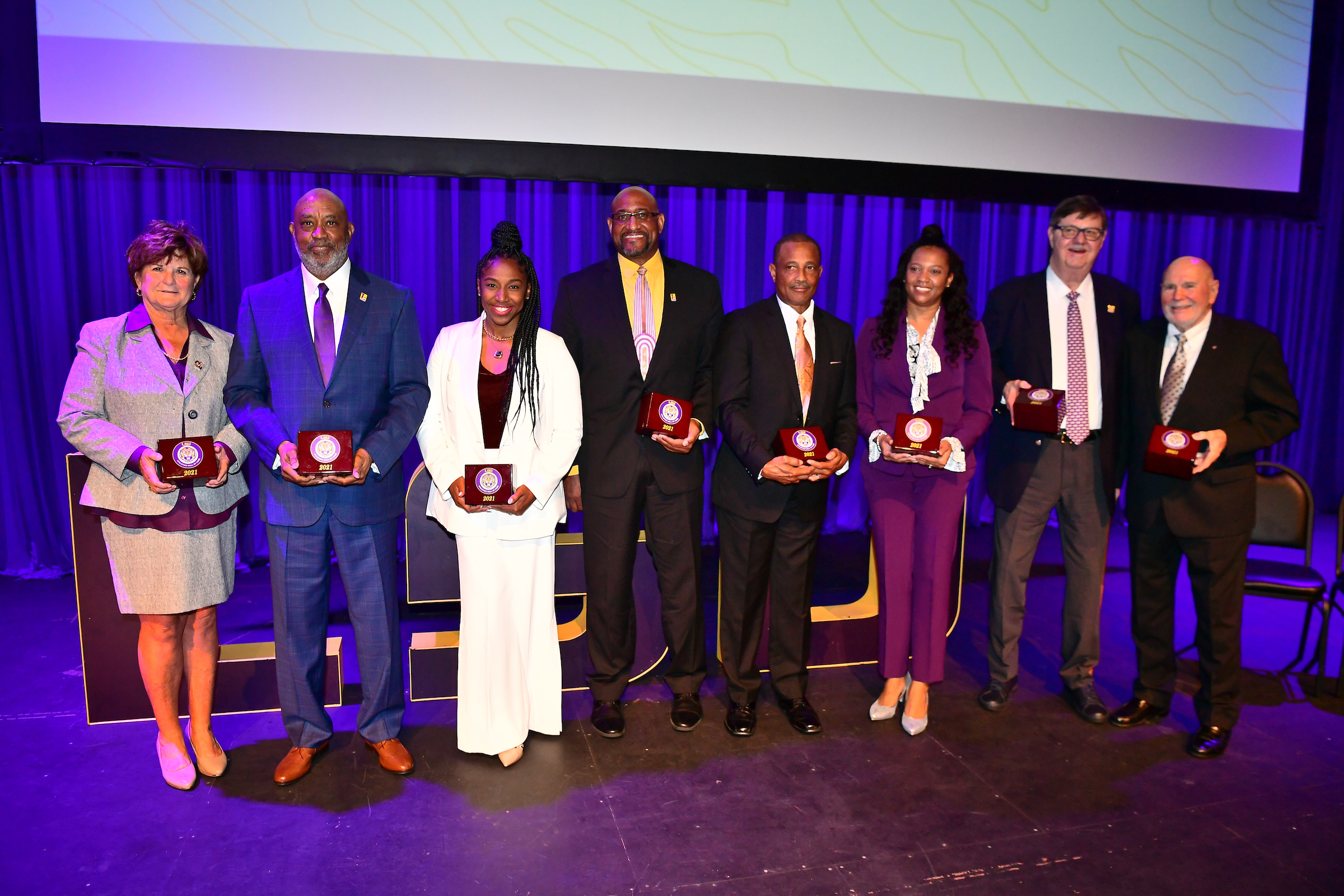 BATON ROUGE, La. – Nine former student-athletes and coaches were inducted Friday night into the LSU Athletics Hall of Fame, and they will be recognized in Tiger Stadium Saturday night during the LSU-Arkansas football game.

Nominees are required to have earned a college degree in order to be elected for induction into the LSU Athletics Hall of Fame. The induction ceremony was held at the Manship Theatre in downtown Baton Rouge.

“LSU is known worldwide for its elite student-athletes and coaches, and this class represents the best of the best,” LSU Director of Athletics Scott Woodward said. “Their relentless pursuit of victory – in competition and in life – serves as inspiration to us all, and I am honored to welcome them into the LSU Athletics Hall of Fame.”

Bankhead, who was born in Bay City, Texas, later moved with his family to Baton Rouge and attended Catholic High School. After serving with the U.S. Marines in Korea, Bankhead graduated from LSU and started the university’s men’s gymnastics program in 1960, serving as head coach for eight years. He also in 1960 revived the LSU swimming program, which had been discontinued during World War II. Bankhead was named the 1967 Southern Intercollegiate Gymnastics Coach of the Year.

He became the first director of the brand new LSU Assembly Center in 1971 and served in that capacity until 1982. During his tenure, the Assembly Center was voted each year by the International Association of Auditorium Managers as one of the Top 10 facilities in the U.S.

Bankhead in the 1970s was one of the first administrators to coordinate women’s sports and Title IX compliance at LSU, and he was the driving force behind attracting prominent athletics events to the university, including the 1983 Special Olympics World Games, the 1985 U.S. Olympic Committee National Sports Festival and the 2001 National Olympic Senior Games.

Dowdie, a 2001 LSU graduate, was a 19-time All-American and a three-time NCAA individual champion as a sprinter, leading the LSU women’s track and field program to three NCAA team titles during her career from 1997-2000.

Dowdie, born in St. Elizabeth Parish, Jamaica, was a 12-time SEC champion, marking the most individual league titles in LSU history. She competed in the 1999 World Championships and in the 2000 Olympic Games in Sydney, Australia.

Girouard, a 2015 inductee into the Louisiana Sports Hall of Fame, elevated the LSU softball program to national prominence during her 11 seasons in Baton Rouge (2001-11). She directed to the Tigers to College World Series appearances in 2001 and 2004, and she led LSU to three SEC regular-season titles and four league tournament championships.

The SEC Coach of the Year in 2001, 2002, 2006 and 2011, Girouard was the driving force behind the construction of LSU’s Tiger Park, which was completed in 2009 and is regarded today as one of the nation’s best softball facilities.

A Broussard, La., native, Girouard completed her career as the fourth-winningest coach softball coach in NCAA history with a total of 1,285 wins at UL-Lafayette (1981-2000) and LSU.

Hinton, a product of Chesapeake, Va., became in 1971 the first African-American football player in LSU history. His courageous decision to attend LSU as an 18-year-old has helped to pave the way for thousands of Black student-athletes to play football at the university.

Though his LSU football career was hampered by a knee injury, Hinton served as a vital mentor to incoming Black student-athletes in all LSU sports during a significant time of desegregation of college athletics in the South.

Today, Hinton works as a volunteer for several non-profit organizations in the Baton Rouge community, including as a teacher, program director and mentor within the Workforce Development field for adults in underserved areas.

Reid, a native of Annapolis, Md., was the 1988, 1989 and 1990 SEC pentathlon champion, excelling in the five-event discipline comprised of the 60-meter hurdles, high jump, shot put, long jump and 800-meter run. He also set an American record in the pentathlon in 1990, and he established LSU records in both the pentathlon and the 10-event decathlon.

Reid, who competed in the decathlon at the 1988 and 1992 U.S. Olympic Trials, helped lead the LSU men’s team to back-to-back NCAA outdoor championships in 1989 and 1990. The 1989 title was the first for the LSU men since 1933, when the Tigers’ track and field squad captured the school’s first national championship in any sport.

Reid earned bachelor’s and master’s degrees from LSU in psychology and social work, respectively, and he now works as the Director of Mental Health at the Washington, D.C. Department of Corrections.

Clare-Kearney Thigpen, a product of Manchester, Conn., was a five-time first-team gymnastics All-American and the 2009 NCAA national champion in the vault and in the floor exercise. She won a school-record 114 individual titles at LSU and was voted the school’s Female Athlete of the Year in 2009.

Clare-Kearney Thigpen was a two-time Scholastic All-American and a two-time member of both the SEC Academic Honor Roll and the SEC Community Service Team. She was voted 2008 SEC Gymnast of the Year, and she was named a finalist for the 2009 NCAA Woman of the Year award.

She has earned bachelor’s and master’s degrees from LSU and a law degree from Southern University. She currently works as LSU’s Associate Athletics Director for Diversity, Equity and Inclusion, and she served as the Tiger gymnastics team’s volunteer coach from 2011-21.

Truax, a New Orleans, La., product, was a 1963 First-Team All-American at tight end for the Tigers, and he was a three-year starter (1961-63) for LSU teams that won 26 games and played in three bowl games, including an Orange Bowl win over Colorado and a Cotton Bowl win over Texas.

Truax helped lead the 1961 LSU squad to the SEC championship, as the Tigers posted a 10-1 overall mark and a No. 4 final national ranking. The ’61 Tigers became the first at LSU to compete against an integrated team when they recorded a 25-7 win over Colorado in the Orange Bowl.

Truax played 10 seasons (1964-73) in the NFL for the Los Angeles Rams and Dallas Cowboys, and he was integral in the establishment of the tight end as a pass-catching threat in the league, helped to revolutionize the position. He played 114 games in the NFL, and he earned a Super Bowl ring in his hometown of New Orleans when the Cowboys defeated the Miami Dolphins in January 1972.

Vega enjoyed a tremendous career as LSU’s men’s gymnastics coach from 1972-84, producing teams that finished in the NCAA Top 10 on nine different occasions. The NCAA Gymnastics Coach of the Year in 1977 and 1978, he produced 58 All-Americans during his LSU tenure.

He led the Tigers to 12 straight Southern Intercollegiate Gymnastics League championships, and he was named SIGL Coach of the Year in 1973 and 1976. Vega, who was inducted into the U.S. Gymnastics Hall of Fame in 1977, traveled throughout the world conducting clinics and promoting LSU as an elite institution.

Vega, who was born in Hurley, N.M.,  was an member of the 1956 and 1964 U.S. Olympic gymnastics teams that competed in Melbourne and Mexico City, respectively, and he served as head coach of Mexico’s Olympic squad.

Wills joined the LSU track and field team in 1969, becoming the first African-American to compete in any sport for the Tigers. He joined basketball player Collis Temple Jr. in 1974 as the first Black student-athletes to earn an LSU degree.

Wills, a product of New Orleans, La., was a four-time All-American at LSU in the 440-yard dash and in the mile relay. He led the 1972 LSU squad to the fastest time in SEC history at the Drake Relays. Wills was a five-time SEC champion, and he earned first-team All-SEC accolades on 10 occasions.

During his LSU career, Wills worked as a Big Brother to physically handicapped youth. He later enjoyed a brilliant career as a teacher, earning 2002 Teacher of the Year recognition from the Orleans Parish School Board. He received in 2010 the Trailblazer Award from the LSU Chancellor’s office, and he was named 2018 Volunteer of the Year by the St. Bernard Parish School District.