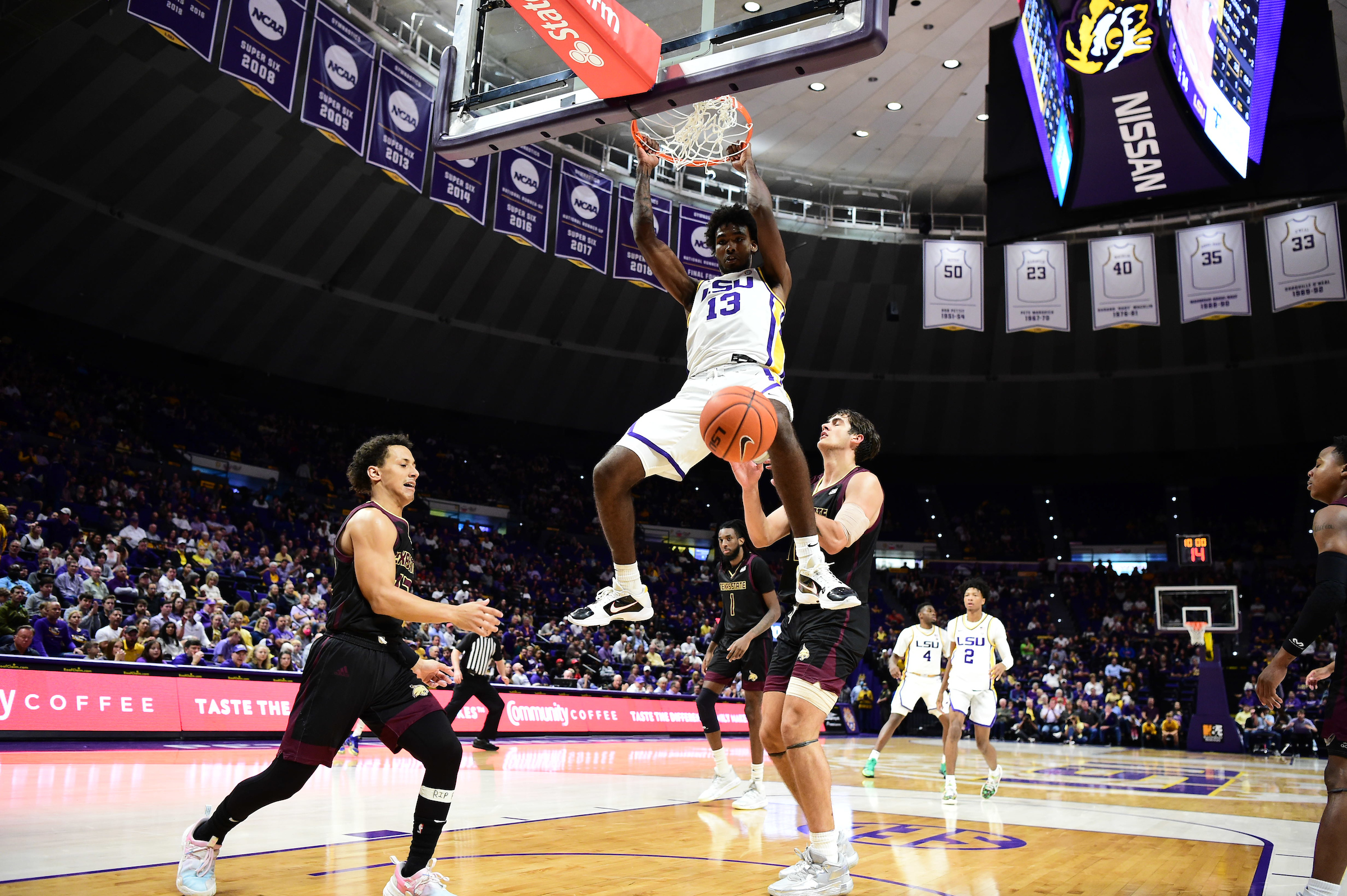 BATON ROUGE – The LSU Tigers out scored Texas State by 30 points in a strong second half offensive and defensive performance to rally from a five-point halftime deficit to win going away, 84-59, over Texas State Friday night at the Pete Maravich Assembly Center.

The win pushed the Tigers to 2-0 on the young season going into an important non-conference game against Liberty (1-0) on Monday. The Flames were also an NCAA Tournament team a year ago. The game will start an hour early at 6 p.m. CT and will be televised on ESPNU and broadcast on the LSU Sports Radio Network.

LSU fell behind, 37-32, at intermission as the Bobcats were able to hit six three-pointers and shot 48 percent overall. TSU had a 10-0 run in the latter stages of the first 10 minutes and built as much as an eight-point lead with 1:07 to go in the first half.

But like the ULM game, the Tigers turned the defensive pressure up and that led to offense on the other end. After holding the Warhawks on Tuesday to just four second half field goals, the Tigers were able to hold the Bobcats to just eight field goals and none from long distance.

LSU had 17 second half field goals and 7-of-9 from distance as they outscored the Bobcats, 52-22.

The Tigers had four players in double figures with Tari Eason getting his second consecutive double double with 17 points and 10 boards and Darius Days also scoring 17. Brandon Murray and Alex Fudge each had 14 points.

Texas State was led by Isiah Small with 13 points, while Caleb Asberry had 12 and Mason Harrell added 11.

Tickets for Monday’s game are available at LSUtix.net.

“Obviously, a great win. In the second half we were tremendous. I thought we weren’t aggressive enough in the first half and turned it up in the second half. We have great athletes, when you press and play hard for 40 minutes, it kind of wears teams down. I thought the pressure in the second half it was much better. Give Alex Fudge a ton of credit, he saved us in the first half. If he doesn’t cut and make that three and shoot well. He made a huge one-and-one to cut the deficit from seven to five when they were kind of running away from us a bit. I thought Fudge did a tremendous job. He showed flashes of his true potential and flashes of his production, he was great. (Darius) Days did what he did in the second half and Tari (Eason); we found a mismatch with him. We were playing smaller, when we fixed that mismatched Tari just went to work. And then Brandon Murray. We were able to run a counter off the mismatch play and get Murray going after we saw that free throw go in and then a shot goes in. Just a total team effort. It was a good win, they’re a good team. We have a better team coming on Monday. So, we have to turn it around quick and get ready to go Monday. Once again, we had 1600-plus students here tonight, which was great. I know on Friday night there are a bunch of formals and stuff going on, so I’m really pleased at the student turnout and overall crowd; the crowd helped us a lot in the second half. When we press and play with energy you kind of feed off the crowds. I was great to have a good crowd especially on a Friday night. It was a good team we beat, I’m proud of those guys.”

On being able to depend on scoring off the bench…

“Yes, Eric Gaines had two of three from three and made some really big 3s for us. We’ve got good depth from our groups. We play hard and we keep running bodies in and make athletic plays. It eventually just wears you down, I thought their point guard (Mason Harrell), he is a great player. He is first-team all-player. I thought he totally controlled the game in the first half, and I let it be known and my guards didn’t care much about that observation. I thought he was playing at his pace and we did a great job trapping him and forcing him to give the ball up, making it hard for them to run offense if he can’t set the offense. We made it hard for him to catch it back and didn’t let him cross the court to run our other offense. We did a good job of making it a lot more difficult on him and be able to control the pace and tempo in the second half.”