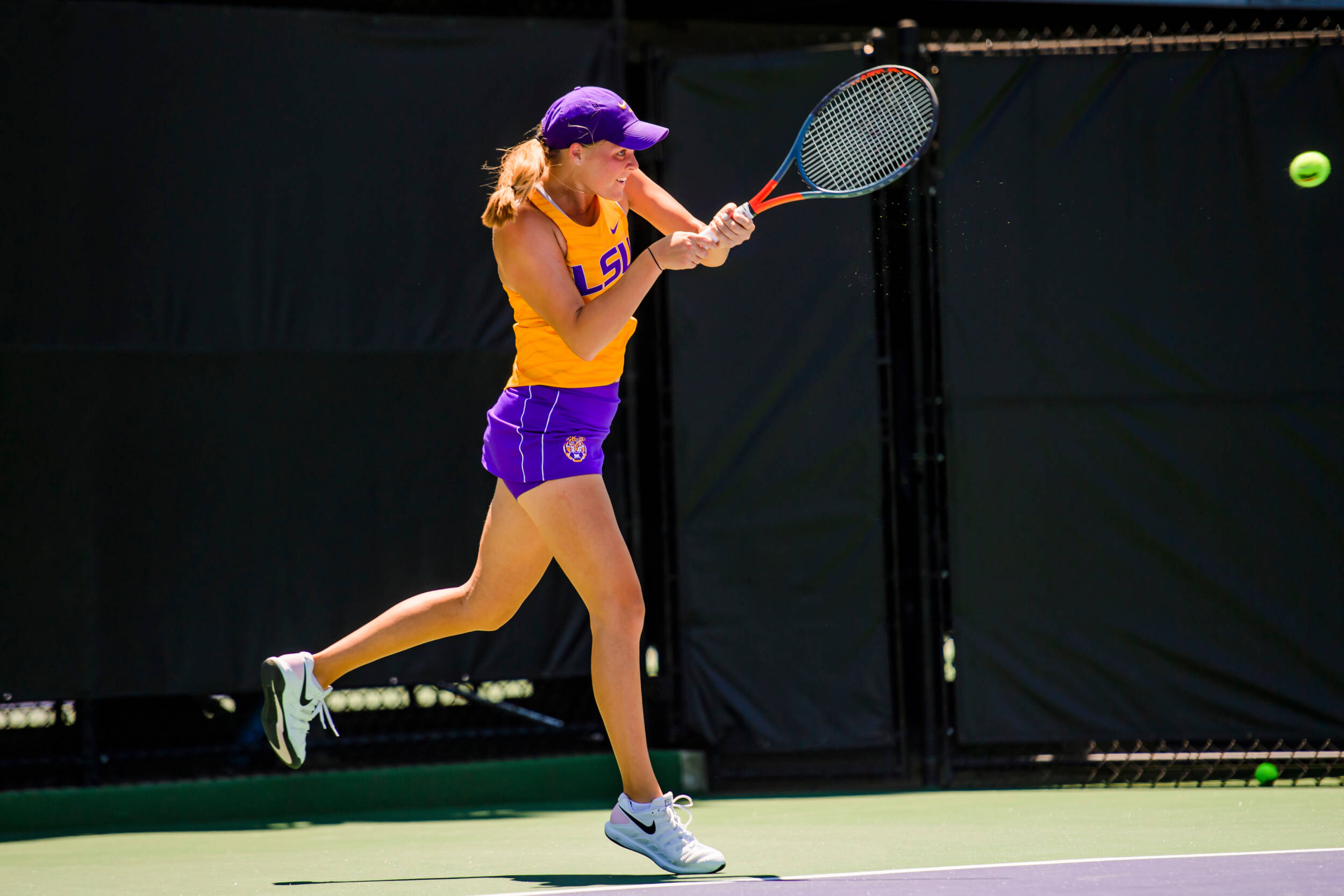 Bryan-College Station, TX – LSU Women’s Tennis junior Maggie Cubitt picked up the highest ranked win of her collegiate career as she defeated No. 26 Indianna Spink in straight sets, on day one of the Texas A&M Fall Invitational on Friday afternoon.

Doubles Results
Graduate student Ena Babic and Cubitt faced off against Baylor’s Anita Sahdiieva and Alina Scherbinina to open the day. The Baylor duo took an early lead and did not lose it as they went on to win 6-3.

The duo of graduate students Taylor Bridges and Mia Rabinowitz were the other Tiger duo in action as they took on Arkansas’ Tatum Rice and Grace O’Donnell. The match opened with a back-and-forth exchange of points, but it was the Razorback duo who pulled ahead in the final games and clinched a 6-4 win.

Singles Results
Babic drew Princeton’s Brianna Shvets in the first singles match of the day. Shvets claimed the first set by a score of 6-2 and repeated the scoreline in the second to clinch match victory.

Bridges drew a familiar foe in her singles match as she faced doubles opponent Tatum Rice. The first set was a tight contest, with Bridges winning the final two games to claim a 7-5 victory in the first set. The second set saw Bridges drop only one game in a 6-1 win to claim the straight set match victory.

Cubitt took on No. 26 Spink from Arkansas in her singles draw. Cubitt held a narrow lead throughout the first set and edged Spink by a score of 6-4. The second set saw Cubitt make a statement by blanking Spink, 6-0, to clinch straight set victory and earn the highest ranked win of her collegiate career.

The fourth singles match of the afternoon saw junior Nina Geissler take on Princeton’s Michelle Sorokko. Sorokko claimed the first set by a score of 6-1 before winning the second 6-2 to secure the win.

Freshman Shaye Longwell took on Skyler Grishuk from Princeton in her singles match. Grishuk jumped out to an early lead in set one and went on to win it by a score of 6-3. Grishuk kept her momentum in the second set as she won 6-1 and clinched match victory.

The final match of the day saw Rabinowitz face Arkansas’ Presley Southerland. The two contested an even first set, with Rabinowitz narrowly able to squeak out a 6-4 win. Rabinowitz maintained her lead and control of the match through the second set, winning 6-3 and securing a straight set win to give the Tigers a win to end the day.

Up Next
Day Two of the Texas A&M Fall Invitational will begin at 10 a.m. CT on Saturday morning.