Lora Hinton, the first African-American football player at LSU, is a member of the 2021 LSU Athletics Hall of Fame induction class and will be formally enshrined tonight at the Manship Theatre in downtown Baton Rouge. 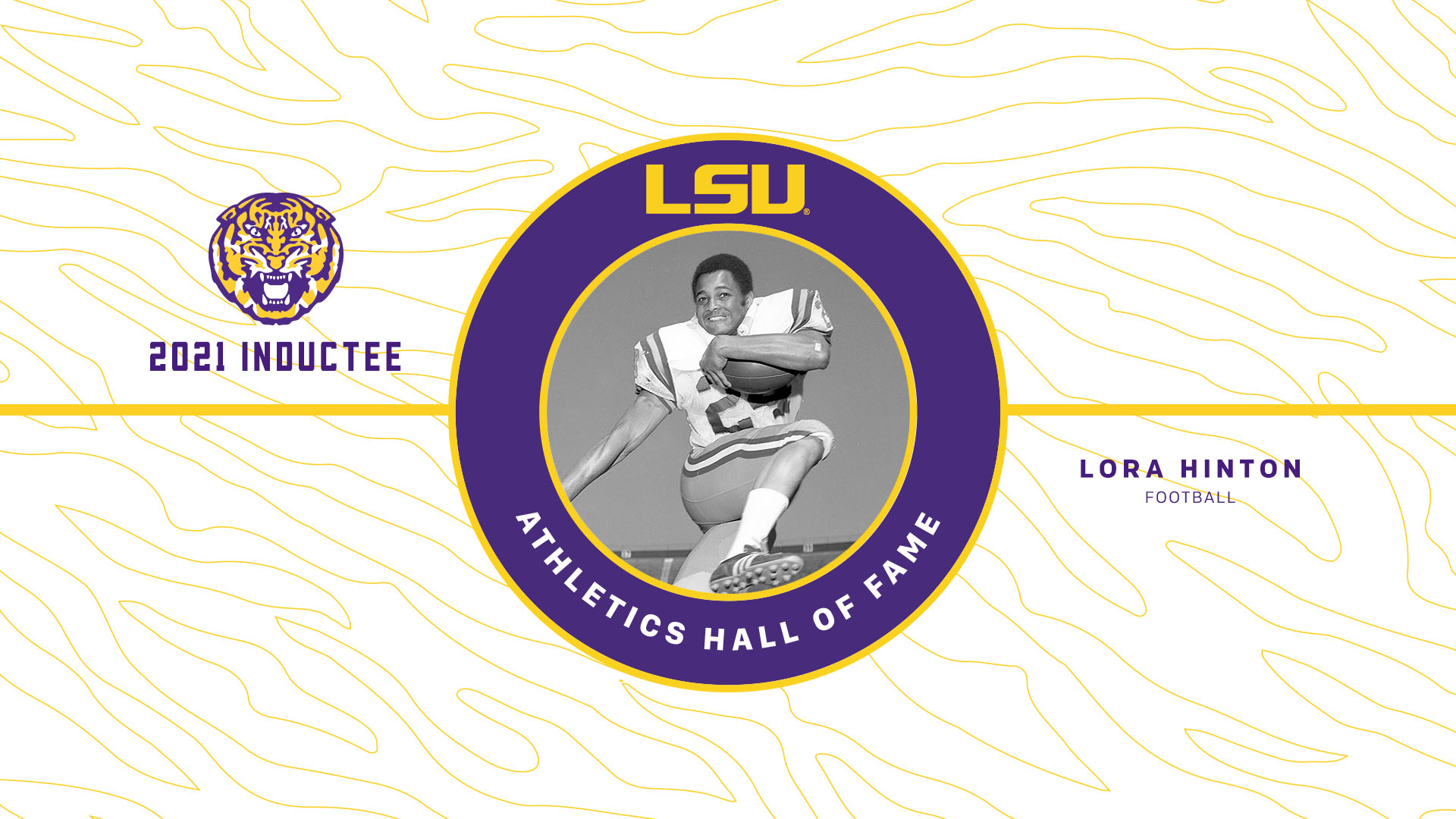 There are very few people in LSU history with a resume’ like former football player and Athletics Hall of Fame inductee Lora Hinton. As an 18-year-old in the fall of 1971, he made the courageous decision to attend LSU and become the first African-American football player in program history.

Enhancing the impact of that monumental achievement, he has continued to stay involved and give back to the LSU community in various ways.

Hinton grew up in Chesapeake, Va., and graduated from Great Bridge High School. While at Great Bridge, he was the first African-American student in the high school’s history, so he was no stranger to breaking barriers when he arrived at LSU.

His incredible speed and shiftiness were more than enough to attract the attention of LSU head coach Charles McClendon all the way from Baton Rouge. The Governor of Louisiana at the time, John McKeithen, noticed too, as he invited Hinton to eat with him at the Governor’s Mansion on his official recruiting visit.

Hinton chose to sign with LSU in 1971 because he was eager to embrace the challenge of crossing the color line of LSU football.

Despite dealing with a lingering knee injury he suffered in high school, Hinton found success under Coach McClendon. He was a three-year letterman and a starting running back for the Tigers in 1973 and 1974.

“Being a part of the LSU organization and contributing towards its success was a big thrill for me,” said Hinton. “My favorite memories during my time at LSU were the bowl games I got to play in my first two years.”

Hinton loved his time at LSU so much because of the lack of prejudicial treatment he received from his fellow players and coaches.

He did, however, receive hate from local outsiders who were very much against the thought of an African-American person playing football for LSU. He also faced hate from opposing players who were against him being on the team.

“There were no racial issues among my teammates and coaches,” said Hinton when asked about what struggles he faced being the first Black football player on campus. “I made a family of lifetime friendships here at LSU.”

“There were times when Lora was not welcomed as part of a formerly all-White sports program,” remembered linebacker Warren Capone, one of Hinton’s LSU teammates. “He opened many doors that had previously been shut and paved the way for the multicultural environment we see today in LSU football.

“He was a true pioneer. The fabric of LSU football, without the contribution of Lora Hinton, could look quite different today.”

When his playing career finished, Hinton dedicated his life to advising college football players who had to deal with the struggles faced by Black men at the time. He later went back to school and received his degree from LSU in 2005 in Vocational Education.

Lastly, he served as a game marshal in Tiger Stadium for 25 years, something he says he enjoyed very much.

“I took the job seriously to make sure all the fans had a great experience,” said Hinton, “I was originally assigned to my section to settle arguments. I had to make sure that everyone cooperated!”

Hinton’s compassion for others is a quality that sets him apart from most people. After every LSU home game that he worked as a game marshal, Hinton would bring boxes of game programs left in seats to the LSU Bayou Bengal Booster Club in Jackson, Miss. The club, of which Hinton is a member, is an affiliate of the Tiger Athletic Foundation.

“Our members couldn’t wait to see Lora coming through the entry doors with a box of game programs in his hands,” said TAF Chairman Emeritus Bill Hulsey. “There was always a loud clapping of appreciation for Lora’s thoughtfulness. It took effort on his part to do that, but it just shows you who he is and what he stands for regarding LSU.”

Former LSU running back and NFL offensive coordinator Terry Robiskie arrived in Baton Rouge as a freshman in 1973 and – as many Black student-athletes on campus at the time – was fortunate to have Hinton as a mentor guiding him through a sometimes turbulent, but transformational experience.

“In my opinion, Lora Hinton did more for LSU and connected the bridge between old LSU and present LSU. At the end of the 2019 season, the world sat and watched as LSU won a national championship, with Black and White teammates so full of love, passion, spirit, trust and fun.

“These are all things,” Robiskie continued, “that Lora Hinton stood for in 1971 and still stands for today in 2021.”

Hinton has said he feels a “sense of pride” seeing African-American athletes compete at LSU. Without Lora’s courage, thousands of young African-American men and women might not have had a chance to suit up for the Purple and Gold.

For that alone, he deserves all the honor and praise that is bestowed upon him as one of the newest members of the LSU Athletics Hall of Fame.

“I can confidently say that Lora has as much integrity and class as any man I know,” said another of Hinton’s LSU teammates, quarterback Paul Lyons. “He has represented LSU, and his teammates, in a manner that would create great pride in the hearts of anyone associated with the university.”