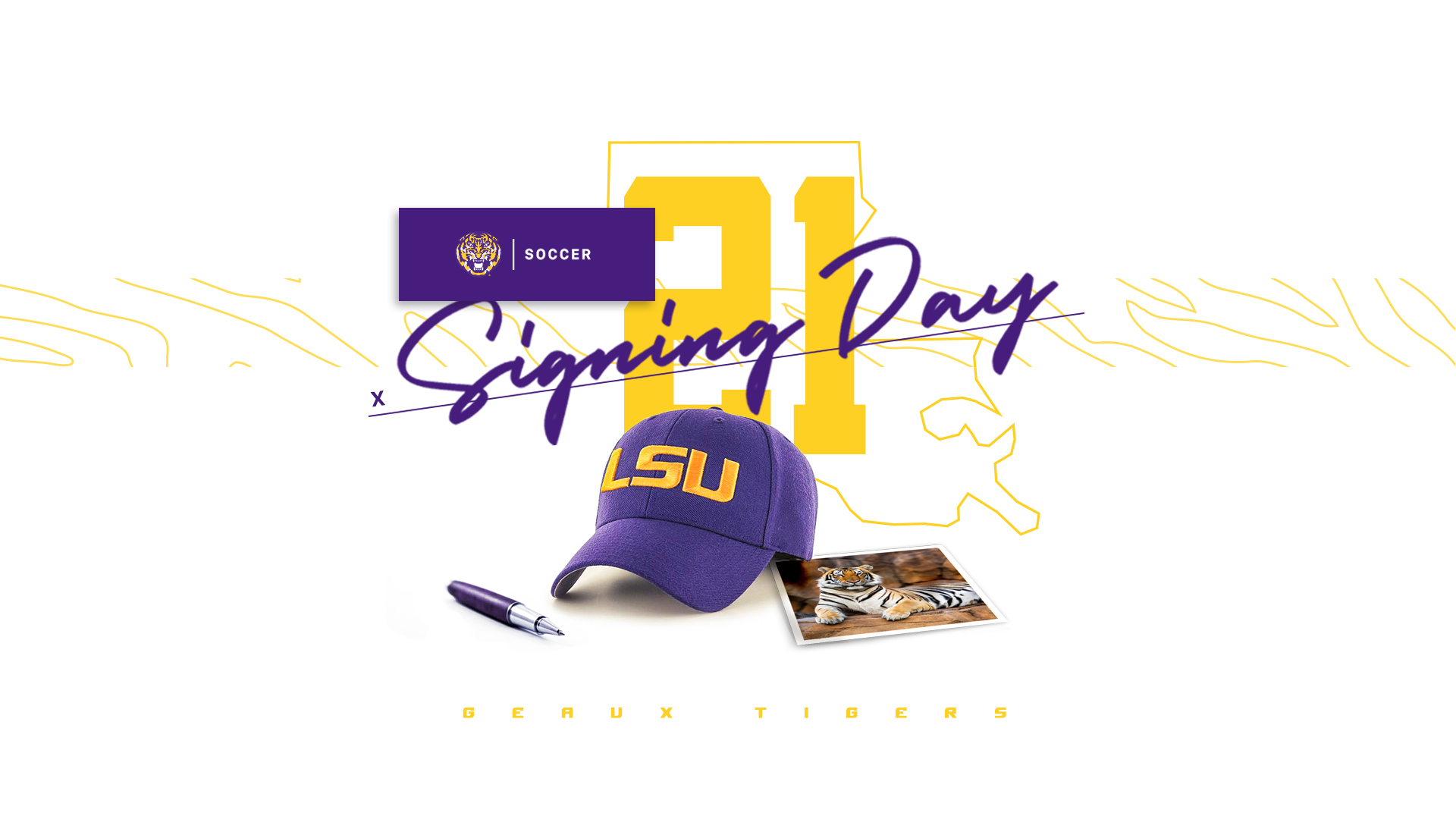 “Really excited for this 2022 class to join us,” LSU soccer head coach Sian Hudson said. “My staff has worked tirelessly and done a fantastic job during a tough recruiting period to bring in a class that we see taking our program to the next level.

“It is a class with great diversity in terms of their talents on the field, and a group with tremendous character and personalities off of it. Together they will be a force for the Tigers for years to come.”

Our Future Is Bright

“Jocelyn will be a great addition to our backline. She has a lot of the traits we are looking for in a defender. She is a tough defender, who uses her body well and is difficult to beat 1v1. Those defensive qualities matched with her ability in possession, her composure and decision-making qualities are what we believe makes her a great fit for our program.” – Seb Furness

“Our goalkeeping union is getting a really strong addition in Bailey. She is coming from an incredibly strong environment at IMG and has a good understanding of what it takes to be a top-level player. She is athletic, technically sound and someone who puts a lot of time into her craft. She has the tools to be a competitive goalkeeper on our team and in our conference.” – Seb Furness

“One of our objectives when our staff arrived on campus was to find a left footed left back. Laney fits the bill. She is a technically gifted player who has the ability to attack on the dribble and impact in the final third with her crossing and finishing capability. She will be an exciting player for our fans in Baton Rouge to see flying down the wing and we are looking forward to having her join our team next fall.” – Seb Furness

Kelsey Major – New Orleans, La. – Midfielder – Lonestar SC/Louisiana Fire
Named the 2020-21 Louisiana Gatorade Soccer Player of the Year after scoring 26 goals and registering 19 assists as she led St. Mary’s Dominican to the LHSAA DI state final with a record of 22-1-1 on the season … named to the 2021 United Soccer Coaches High School All-American team … 2020-21 LHSAA Division I Offensive Player of the Year … named to the All-Metro and All-State LHSAA soccer teams from 2018-21 … served as soccer captain at St. Mary’s Dominican since 2019 … helped Louisiana Fire club squad to five state titles (2015, 2016, 2017, 2018, 2020) … captain of the Louisiana Fire club team since 2015 … 2019 ODP National Training Camp invitee … named to the ODP South Region player pool from 2018-21 … member of the ODP South Inter-Regional squad team in 2018 and 2021 … two-sport star in high school … became first high school athlete in Louisiana history to win two Gatorade Athlete of the Year awards in the same year as she was named the top athlete in Louisiana in both soccer and cross country during the 2020-21 athletic season … 2020 LHSAA 5A state champion in cross country … 2020 All Metro Runner of the Year in cross country … three-year member of St. Mary’s Dominican Student Leadership Council.

“Since the day our staff arrived on campus we had heard the buzz about Kelsey and her reputation within the state. We believe she is the top Louisiana recruit in the 2022 class and we could not be happier that she chose to stay in her home state to be a part of our team. She is a dynamic and versatile player who brings mobility and energy to the team and she has the potential to play in two or three positions. We are looking forward to seeing her impact on the program in the coming seasons.” – Seb Furness

“Rae is a midfielder with tremendous passing range and goal scoring ability. With the quality of her final ball and striking ability from distance, she will add goals and assists for years to come and we are thrilled she is bringing her talents to Baton Rouge and joining our program.” – Seb Furness

Danielle Shannon – Houston, Texas – Midfielder – Houston Dash Academy
Member of the Houston Dash Girls Academy since 2017 under Coach Omar Morales … consistently ranked in 2022 IMG Top 150 players and achieved highest ranking of 34 in the nation … ranked as the No. 15 midfielder in the country/No. 2 in Texas region … Selected to U18/U19 WNT Virtual Camp … selected to the Girls Academy Showcase Best XI … served as team captain for the Houston Dash U18/U19 club team … earned several invitations to train with the Houston Dash NWSL team … attended U14 GNT camp … played one year for Coach Brittany McCloskey at Atascocita High School and led the team to their first ever district title.

“Dani is a box to box midfielder, an absolute driving force and presence in the middle of the park. Her courage to want the ball in tight spaces, matched with her tenacious approach to how she presses and defends is what has set her apart in the recruiting process. She will be a great addition to our team and we are excited she will be joining the Tigers.” – Seb Furness

Sage Glover – Atlanta, Ga. – Forward – Concorde Fire
Has played club soccer for a number of competitive programs such as Cleveland Soccer Academy, Louisiana Fire, PDA Sting, PDA South ECNL, and Concorde Fire Platinum ECNL … served as the team captain for the PDA ECNL regional squad in 2017 and 2018 … led her high school, North Atlanta High School, in assists during the 2019 season and earned the Distributive Award for the season … led North Atlanta to to the 2018 Cape Atlantic League title … named to the 2019 Cap Atlantic League First Team … member of the national Honor Society … has been playing competitive soccer since the age of seven.

“Sage made a strong impression on our staff during the recruiting process with her technical ability, her tactical understanding and her enthusiasm for the game. She is a versatile player who can operate anywhere across the attacking third and impact the game with her ability to create chances for herself and others. We look forward to welcoming Sage and her family to LSU.” – Seb Furness