Neil Farrell Jr. returned to LSU in 2021 with a point to prove. 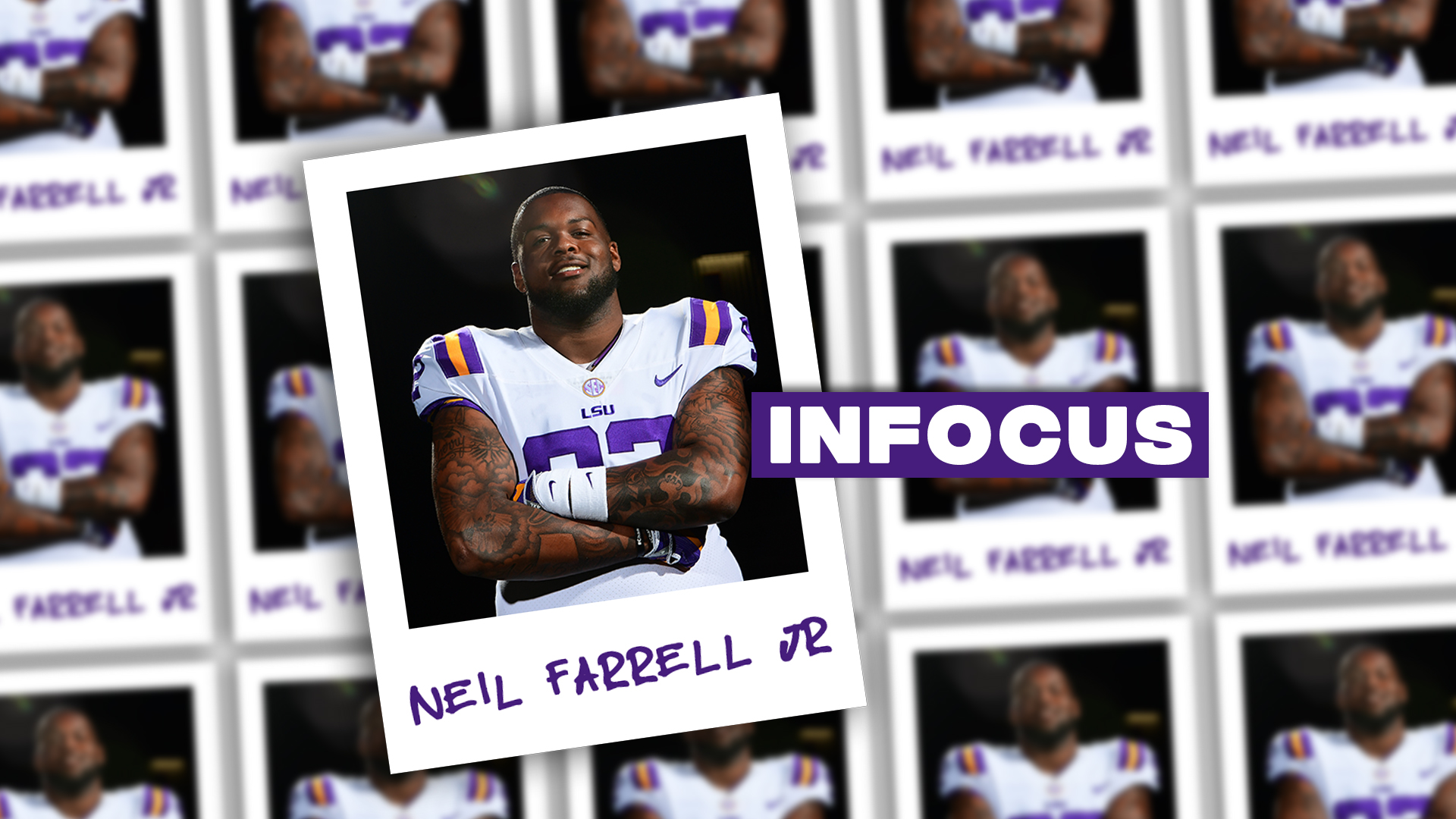 Neil Farrell Jr. came back with a point to prove.

Leading LSU’s defensive line in tackles during the 2019 national championship season, Farrell wasn’t satisfied with the campaign he, and the rest of his team, posted in 2020. It lit a fire under him in the offseason to take care of some unfinished business, starting specifically with the defensive line.

“We’ve got a point to prove,” Farrell said. “We want to be the best defensive linemen in the country. We work every day. No talking, we just keep our head down and work.”

Saying Farrell is one of the top interior lineman in the country isn’t just talk, either. The stats back it up. The film does, too. With another 90+ grade game, this time against Alabama last Saturday, Farrell is now the highest graded defensive lineman in the country, according to Pro Football Focus, as he registered another standout performance with seven tackles, two for loss, five pressures, three quarterback hurries and one sack.

HE KNEW THE RESULTS were going to come, but the journey to get to this point has not exactly been as predictable. Farrell returned to his hometown of Mobile, Alabama in August of 2020 due to family concerns related to the COVID-19 pandemic, not knowing what the immediate future looked like.

He knew he’d be back, but he didn’t know when. Nothing else mattered at that point except family.

“My grandmother was sick,” Farrell said. “I had to do what was best for me and my family. I had to be there for her. But I always knew in my mind that I was going to come back. She got better. Things didn’t go how I wanted it to, but I came back for another year to make things right.”

He’s certainly made things right. Farrell came back with a great attitude and a fresh mindset, in conditioning, on the field, and with his leadership. He’s made upgrades in all three aspects.

“I had a great offseason,” Farrell said. “I put in a lot of work to be in the position I’m in. It was a lot of conditioning, a lot of going home for extra work, coming up here on weekends.”

Head coach Ed Orgeron sees it, too. Those extra hours in the summer have not gone unnoticed. Gap discipline being the one thing he still needs to work on, says Coach O, Farrell’s ability to explode, come out of his hips, and use his hands has allowed him to shed blocks and be a force in the trenches.

“He came back hungry,” said Orgeron of Farrell. “He has a great feel for the ball. His awareness, ability to shed blocks, it’s been hard for (opposing teams) to single block him. He has destroyed some single blocks. He’s played really, really well with his technique.”

“He came back a different cat,” Orgeron added.

Farrell is one of the few veterans left from that star-studded 2017 signing class that helped lead the Tigers to a national championship two years later. Farrell led the defensive line in tackles with 46 that year, and is currently on pace to post his best season yet in an LSU uniform.

One factor has given Farrell a boost, too: the return of senior defensive lineman Glen Logan. Orgeron has noticed that Logan complements Farrell perfectly, and for the two veteran tackles, iron sharpens iron. The LSU defensive line is a different beast with No. 92 and No. 97 up the middle, and Coach O has enjoyed having two experienced linemen back for one last go-round.

“They have been playing together for years,” Orgeron said. “Neil and Glen are talking all the time out there. With Glen playing, there were less holes in the middle. It enabled Neil to make more plays. I attribute that to him and his buddy playing side by side.”

Great having my brother back out there with me again !!! @glen_logan97 pic.twitter.com/1vpuFZWi8t

A graduate in his fifth season, Farrell, along with each of his fellow starters on the defensive line, all chose to return to LSU. They felt like they had more to give after an abnormal and unconventional 2020 college football season. Through nine games in 2021, he’s reached the potential he knew he had in him all along, making his decision to return all the more worth it.

“We all sat down and had a conversation with each other,” Farrell said on the entire defensive line returning for another year. “We felt like we had a lot more to offer to the table, and a lot more things to accomplish. We all decided to come back and give it another shot.”

Farrell has brought a lot to the table, which makes sense because he came back hungry. Currently standing at 35 tackles and two sacks, his impact, though, has surpassed the box score. He’s been all over the field this season.

“My career has been a journey,” Farrell said. “When I came in as a freshman, I didn’t play much. I just kept my head up, worked hard and got better each and every year. I feel like I’m in a good place right now to compete at a high level.”

Since he stepped on campus in 2017, the defensive line unit has never been closer than it is now. That says a lot, considering how many teammates Farrell has had, but the 2021 group is the tightest, a credit to defensive line coach Andre Carter for his relatability and relationship with the players.

“This is the closest we’ve ever been as a unit,” Farrell said. “We hang out every day, we’re always on the phone, watching film together, trying to get better. We make each other better every day at practice.”

OFFENSIVE TACKLE AUSTIN DECULUS WAS a part of that 2017 class. He’s seen the progression that Farrell has made first-hand — he’s had to block him in practice for five years. Even if he’s been a chore to block, he couldn’t be happier for his close friend, most importantly, for the strides he’s made.

“It’s been awesome to see,” Deculus said. “He’s one of my close friends. To see where he’s come from, even our freshman year to now, it’s night and day, and he was a great player back then, too. He’s doing things each week that’s surprising the nation.”

One thing is clear about Farrell: family means everything, and he works hard with them squarely on his mind. With the campaign he’s putting together in 2021, his ultimate goals of playing at the next level and finishing the season strong keep him motivated. There’s no slowing down in sight.

Neil Farrell, a Mobile, Alabama native, said he had 12 family members in attendance on Saturday for the game.

He pointed up to their section after recording this sack, as you can see here. pic.twitter.com/3vZiFXH9il

“My goal is to, God willing, make it to the NFL one of these years,” said Farrell. “I want to bless my mom with something nice, give back to my community, and go back there and help the kids.”

“I’m happy as ever,” Farrell added. “My grandmother is better. As long as she’s good, I’m good.”

Farrell’s story at LSU has been inspiring: from waiting his turn, to graduating amid adversity, to becoming the player he always knew he could be.

But the story isn’t over yet. He came back to prove a point, and he’s proving it with each consecutive game.

With three opportunities left, Farrell has legacy on his mind. Finishing strong is important to him. He wants to leave something behind and be remembered as one of the greats.

“I want to be one of the best defensive tackles to come through LSU,” said Farrell. “I know we’ve had greats like Glen Dorsey, Michael Brockers; I just want to be another household name here.”

“I feel like I’m proving my point,” added Farrell, “and still proving it.”