Nineteen-time track and field All-American Peta Gaye-Dowdie is a member of the 2021 LSU Athletics Hall of Fame induction class and will be formally enshrined on Friday, November 12, at the Manship Theatre in downtown Baton Rouge. 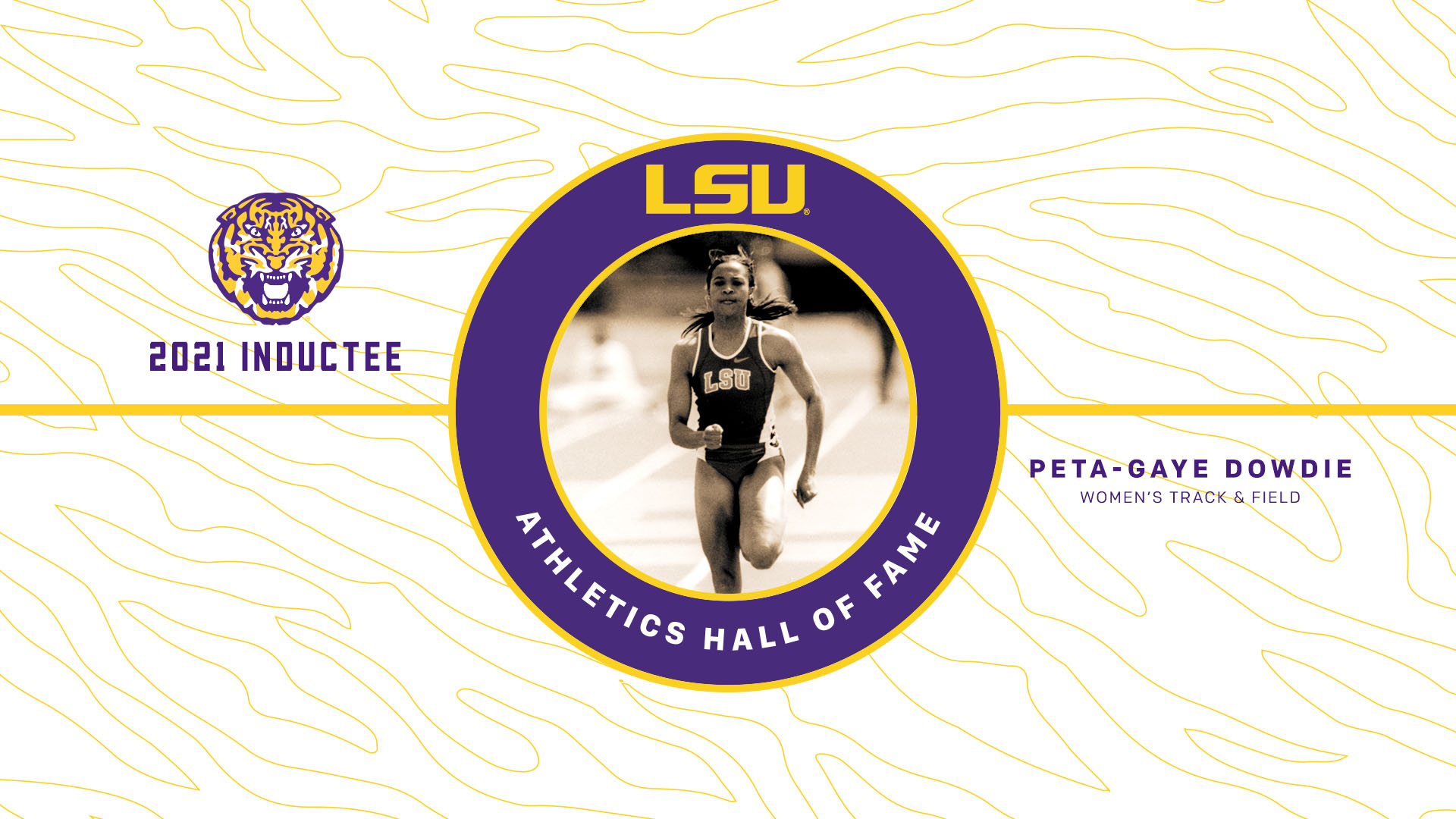 The LSU women’s track and field team created an unprecedented NCAA Championship win streak near the turn of the 21st century. Peta-Gaye Dowdie was an integral leader during this time, solidifying herself in LSU Athletics history with her remarkable performances.

From 1997-2000, Dowdie developed an impressive career at LSU. She was a 19-time All-American and three-time NCAA individual champion as a sprinter. She was the first LSU freshman to win the SEC 100-meter title, a feat that has since only been achieved twice in program history.

She was a 12-time SEC champion during her career, further establishing herself in LSU history as the school’s most individually decorated athlete. Furthermore, she is praised for leading the women’s program to three NCAA team championships.

Dowdie carried her success around the world, competing for her home country of Jamaica while a student at LSU. She competed in the 1999 World Championships, earning a bronze medal in the 4×100-meter relay, and in the 2000 Olympic Games in Sydney. After finishing her career at LSU in 2000,

Dowdie continued to represent Jamaica as a member of the sprint relay team and competed in the 2006 Commonwealth Games and 2007 Pan American Games. She earned gold medals at both events.

Dowdie admitted that, unlike most college athletes, she did not consider pursuing college sports until she was 15 years old. She simply enjoyed running for fun and never thought anything beyond that was possible. One conversation with her Uncle Harry changed her life.

“My Uncle Harry sat me down and told me I could travel the world, see different places and experience new things if I dedicated myself to the sport,” Dowdie recalled. “He convinced me I could be as famous as other athletes from my country.”

She is the first to acknowledge that her journey to becoming a successful athlete was not the easiest. She was often relying on public transportation to take her to and from school, enduring late nights of travel and completing homework after hours of practice. Many times she thought about quitting just to make it easier on herself. She said her family was instrumental in keeping her focused.

“All of my family, parents, aunts, and uncles came to all of my meets and supported me every step of the way,” Dowdie said.

When the time came for Dowdie to select her home away from home in America, she admitted that she did not feel the same connection at other universities that she found at LSU. During her visit, Dowdie enjoyed the experience with Suzette Lee, her former high school teammate and eventual college teammate. Her trip confirmed Louisiana would become her home for the next four years.

“I remember being in Louisiana and loving how the weather was similar to home. It was sunny and warm like Jamaica.” she recalled. “Suzette, one of my friends, hosted me and it just felt right.”

Looking back on her time at LSU, Dowdie shares that her coach, Dennis Shaver, and her teammate, Lee, helped develop her not only into the athlete she became but the person she is today.

“Coach Shaver established a structure with my training as a student, and I continue those practices in my family and career life to this day.” Dowdie said. “Coach Shaver and Suzette both pushed me to continuously compete.”

As Dowdie reflected on her lengthy career, she did not hesitate to recount her most memorable moment as a Tiger. She excitedly detailed her outstanding first place win in the 2000 NCAA Outdoor Championships 200-meter dash. This accolade holds a special place in her heart, as it was her first time placing in the NCAA 200-meter event in what was her final race in LSU’s purple and gold.

“I was so proud,” she said. “Coach Shaver was so happy for me. My entire career, I always came up short due in that event due to injury, and I finally won.”

While her time at LSU was short in years, Dowdie’s love for LSU runs strong. When asked about the honor of being inducted into the LSU Athletics Hall of Fame, she was beyond proud.

“I am honored and privileged; I love my school,” she said enthusiastically. “Just to be enshrined and a lasting part of LSU history means the world to me.”

When it comes to defining an LSU student-athlete, Peta-Gaye Dowdie is a prime example of what it means to be a Tiger. Over 20 years later, she still holds unbeatable records for LSU. From a young girl in Jamaica who ran for fun to a world-renowned, record-setting athlete, Dowdie achieved more in her career than some can hope to achieve in their entire life.

When asked if she would change anything about her career, she confidently says not a thing.

“If I had to make the decision now, I would still choose LSU,” Dowdie shared. “I would do it all over again. I love the purple and gold. I love my Tigers.”