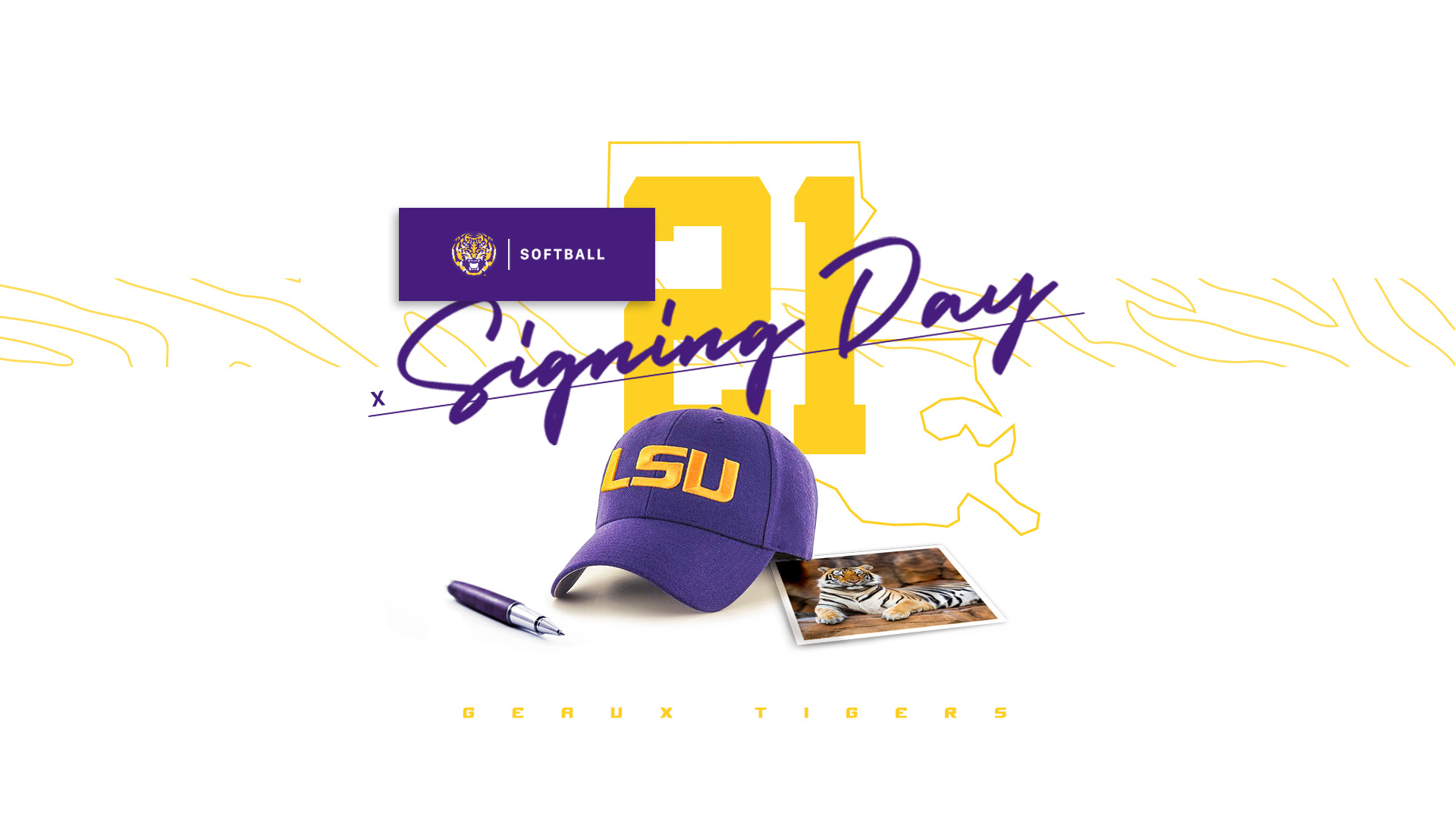 “This class is truly special, and we have been awaiting their arrival for a long time,” said coach Torina. “They are the best of the best at their respective positions and will help us continue to compete at the absolute highest level. I fully expect that we will see an immediate impact on our program from this group. We are proud of all they have accomplished up to this point in their careers and we cannot wait to see what lies ahead for them as a part of our program.”

Bergeron, a native of Rayne, La. will be a catcher for the Tigers. Bergeron is a four-year varsity letterman at Notre Dame High School where she is a three-time Division III All-District and All-State Champion, and a Max Preps All-American.  She is currently a member of the USA Junior Women’s National Team and is a two-time Louisiana Gatorade Player of the Year. In the 2021 season, Bergeron had a .560 batting average, drove in 78 runs, and scored 51 runs behind 63 hits, including 30 home runs.

Maci Bergeron, a catcher from Rayne, Louisiana, is officially a Tiger!#GeauxTigers pic.twitter.com/GnzRhkhNAR

Berzon will join the Tigers from Buffalo, N.Y. as a pitcher. Berzon is a four-year letter at Baylor School and a three-year member of the National Honor’s Society. On the field, Berzon is a two-time All-American and TN Gatorade Player of the Year and helped her team to two state championship titles her junior and freshman year. In her junior season, Berzon pitched 77 innings where she posted a perfect 17-0 record behind 179 strikeouts and a 0.47 ERA. She also batted .389 and compiled 28 RBI and five home runs.

The last four summers, Berzon has played for the Fury Platinum organization run by former LSU softball player Jill Crawford Higdon. During Berzon’s tenure, the club has won seven tournaments over that span, including back-to-back titles at Eastern Elite (2019-20). In 2021, they finished third at Colorado Fourth of July Tournament. Berzon is the No. 11 recruit in the nation according to Softball America and is ranked T-17 by Extra Inning Softball.

Sydney Berzon, a pitcher from Buffalo, New York, is officially a Tiger!#GeauxTigers pic.twitter.com/cqelTcuCkN

Johnson is from Fairhope, Ala. and will pitch for the Fighting Tigers. Johnson played at Fairhope High School where she was also a three-time member of the National Honor Society. She is a two-time Class 7A Pitcher of the Year, All-State honoree, and Coastal Player of the Year. As a junior, Johnson had an 18-1 record in the circle and posted 11 shutouts and six no hitters. She had a 0.62 ERA in 101 innings pitched, striking out 210 batters to hold opponent batters to a .082 average. Also, at the plate, she batted .348 and had six home runs. Johnson has played club with the Birmingham Thunderbolts the last four summers. Johnson is the No. 23 recruit in the nation according to Softball America and is ranked T-7th by Extra Inning Softball.

Alea Johnson, a pitcher from Fairhope, Alabama, is officially a Tiger!#GeauxTigers pic.twitter.com/XbRY0WT5j4

Savoy is from Branch, La. and will be an infielder for the Tigers. Savoy was a teammate of Bergeron at Notre Dame High School where they won two state championships and was listed on the principal’s list four consecutive years. Savoy is a two-time All-State, All-District, All-Acadia, and All-Metro selection. Last season on the way to her second state championship title, Savoy batted .562, had 78 RBI, 63 hits and 20 home runs.

Savoy played club for the Hotshots in summer 2018-20. With the 14U team in 2018, Savoy helped the team win the Colorado Sparkler and in 2020 the 18U team won the TFL and was the ASA Nationals runner-up. Last summer Savoy played with the Bombers 18U team out of New Braunfels, Texas. Savoy is ranked T-65th by Extra Inning Softball.

Abigail Savoy, an infielder from Branch, Louisiana, is officially a Tiger!#GeauxTigers pic.twitter.com/TxSinA7RRl

Strood played club for the Birmingham Thunderbolts in 2020-21 and is a current member for the Texas Bombers. Strood is the No. 10 recruit in the country according to Softball America and is ranked T-40th by Extra Inning Softball.

Townsend is from Morris, Ala. and will be in the outfield for the Bayou Bengals. Townsend played at Mortimer Jordan High School and is a two-time National Honor Society member. She was All-State Honorable Mention her freshman year and was selected to participate in the AHSSA North/South All-Star Game last season as a junior. Last season, Townsend had a .455 batting average, scored 48 runs, had 56 hits, and stole 14 bases. Townsend has played the last three summers for Georgia Impact (2019-21). Townsend is ranked T-51st by Extra Inning Softball.

Maia Townsend, an outfielder from Morris, Alabama, is officially a Tiger!#GeauxTigers pic.twitter.com/EX5QFLoiCy