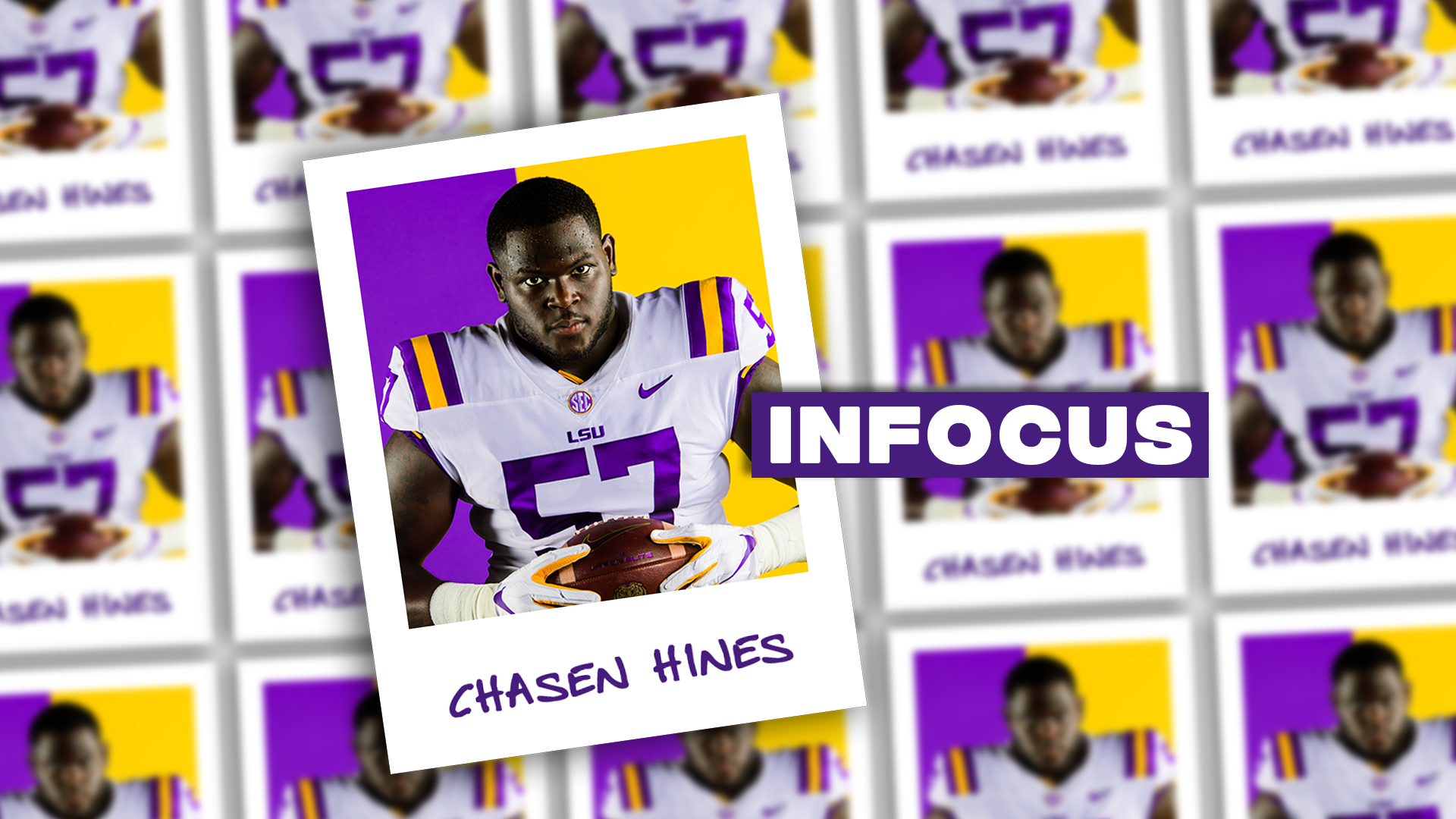 The 6-3, 350-pound senior from Marshall, Texas, was not always the football guy. Baseball was his main focus growing up, but football came easy because of his size and athleticism. Regardless, he did not fall in love with football until high school.

Since Hines did not know too much about football as a kid, he naturally learned from the teams he saw on TV. LSU happened to be one of those teams, and Hines held onto it.

“I always wanted to see what LSU was doing,” Hines said. “Watching them since I was 8 or 9 helped me realize I wanted to play for them and that it was my dream school.”

With his newfound love for the game in high school, Hines started his career on the offensive side of the ball. In his senior year, he made the switch to defensive tackle, which was uniquely his decision. Hines was usually stuck in a certain position, but he was eager to try something new and take advantage of having the option.

“I fit the title,” Hines said on the transition to the new position. “I always played both sides. That was just the style of ball that I enjoyed.”

Hines enrolled at LSU as a defensive lineman, but quickly moved back to offensive line during his first preseason camp in 2018. The transition phase he experienced in high school proved to be invaluable, as he underwent yet another transition early on in his collegiate career.

“It was more natural,” Hines said, regarding the new job with his new team. “High school O-Line is way different than college O-Line, but it still felt natural getting back into it.”

When asked which side of the ball he prefers, Hines humbly displayed his self-sacrificing nature.

“My main thing is whenever I can get on the field, I want to do my best,” Hines said. “We needed help on O-Line, so that’s where I wanted to be. I feel like that’s where I should be.”

Due to offensive line injuries in 2018, Hines saw action as a true freshman, and he has played in 27 games with 10 starts thus far. In 2019, Hines was the backup center to NFL Draft pick Lloyd Cushenberry, who taught him countless ways to improve his game.

“I learned a lot from Lloyd,” Hines said. “He showed me how to lead by example and how to get people in gear. I was trying to mimic every little thing that he did, and it turned out better for me.”

Also in 2019 was the championship season that is referred to as “The Best Ever.” Part of that season’s perfection included the offensive line’s acquisition of the Joe Moore Award, which is awarded to the best offensive line in the nation. Hines affirmed that both he and his teammates were never focused on winning the award itself, but rather putting in the work to set themselves up to receive it.

“It wasn’t even about the award,” Hines recalled. “We were focused on getting better every single day, and the days turned into weeks, and when we looked up, we were being considered as the best O-Line in the country. For me, I’m a lineman, so it’s more of an award we get together. I see what it took to win it, and I will always take that with me wherever I go.”

Hines’ team-first attitude is what sets him apart, but having likeminded teammates helps him sustain the mentality. Another mentor that Hines relied on was NFL Draft selection Damien Lewis, and while Hines will not hesitate to reach out to Cushenberry or Lewis whenever he needs to, Hines realizes that he is now the one that others need to call on.

“My role is to bring the energy around the locker room and be a team player,” Hines explained. “I always ask myself, ‘how can I help the person beside me and behind me get better?’ I feel like I’m more of a mentor now.”

In the trenches, Hines is always the one with a smile on his face, ensuring all of his teammates are doing well. Enjoying the moment is important to him because he knows football will not last forever. Despite the sport’s brevity, Hines credits football with teaching him discipline and patience, and forming him into a grown man.

“I knew about the little things when I came here, but I realized how important they were as I got older,” Hines said. “The small things that do not seem to matter will get you beat. Now, I have to focus on the little things and always look at the big picture.”

By channeling the players who came before him and relying on his own character, Hines hopes that when people remember his name, they think of a guy who was just a good person. Hines wants to go out as one who worked hard in all aspects, whether it was on the field, in the weight room or in the classroom. However, perhaps Hines’ most valuable quality is how well he treats people, and that will certainly never be forgotten.