NCAA track and field champion Bruce Reid is a member of the 2021 LSU Athletics Hall of Fame induction class and will be formally enshrined on Friday, November 12, at the Manship Theater in downtown Baton Rouge. 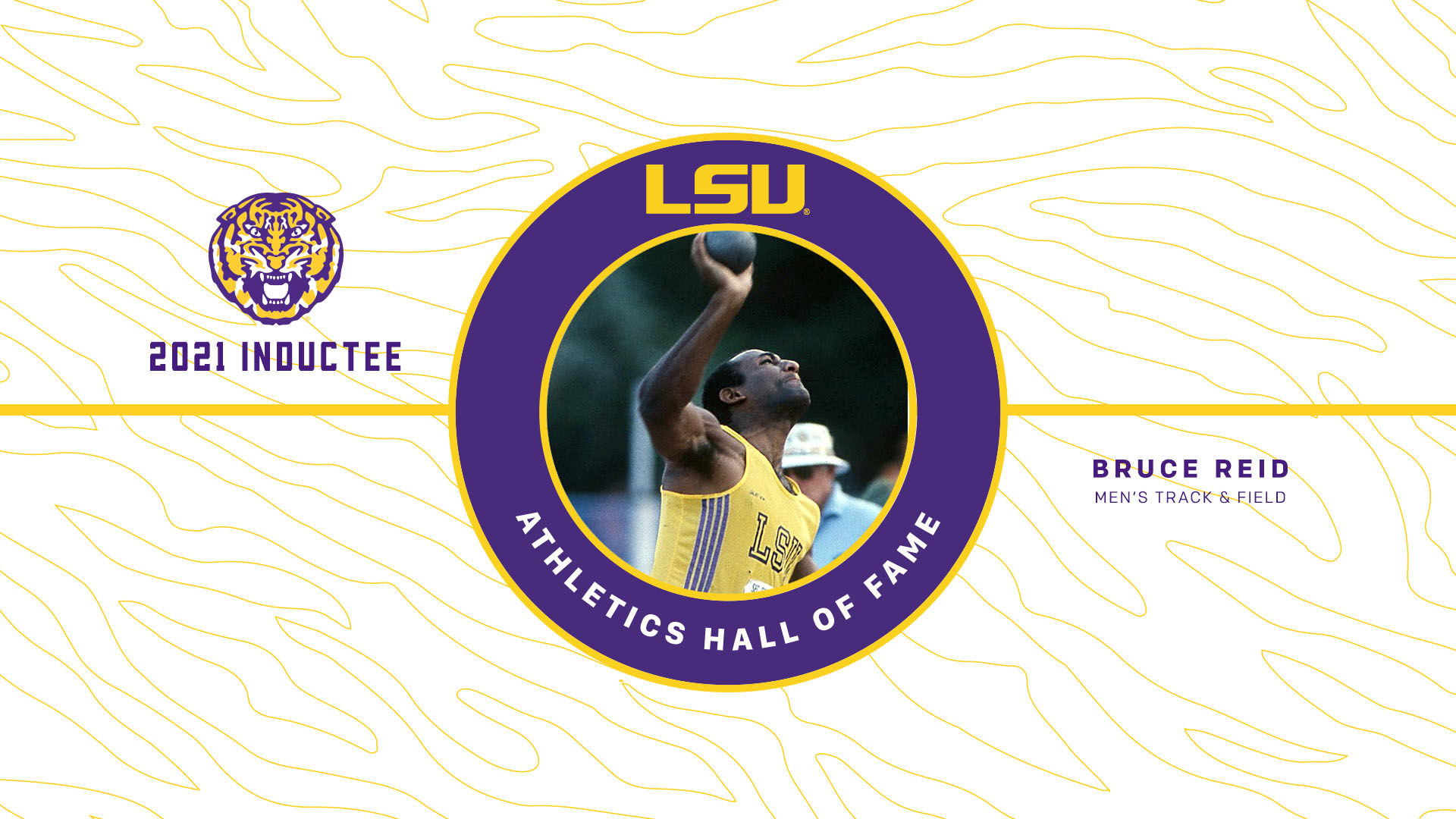 Bruce Reid, a native of Annapolis, Md., has very strong and enduring history at Louisiana State University. He was an undergraduate at LSU from 1986-90 – receiving his bachelor’s degree in psychology – and went on to earn his master’s degree in social work in 1992.

LSU has changed a lot for the better since Reid attended the university in the ‘80s and ‘90s. He said he is not surprised by the changes at all, and finds it comforting to see his alma mater flourishing and evolving with the times.

LSU holds a special place in his heart. He will forever the hold memories and lifelong connections he made as a student-athlete.

“Being at LSU was a great experience,” Reid said. “It fortified my life; it is the place that I found my wife and now we have two great children, Bruce (29) and Brent (27). Being at LSU set my life going in the right direction and helped me continue to go in that direction.”

As he dominated in the classroom, he was just as dynamic on the track. Reid originally came to LSU on a track scholarship as a hurdler in 1986, but later decided to compete in not only one, but two other, events. The other events were the decathlon (10 events over a two-day period) and the pentathlon (five events in one day), two of the most grueling events in the sport.

Expanding his workload of events allowed him to become a well-rounded athlete and enabled him to tap into different skill sets that he previously didn’t know he possessed.

His collegiate career was also filled with fun, one of his fondest memories being the chance to compete as an LSU teammate with his older brother, Eric Reid.

“One of the reasons I went to LSU was because my brother, Eric, was there. We were on the shuttle hurdle relay team together at the Penn Relays my sophomore year. Eric and I are close, and to be able to do that with him and win was great. Just having that relationship and being there with my brother was one of the most amazing things that happened for me.”

Bruce Reid has many accomplishments and deserves the highest amount of recognition for them. His hard work and dedication to his sport allowed him to become the SEC pentathlon champion in 1988, 1989 and 1990. He went on to help lead the LSU men’s team to the 1989 and 1990 NCAA outdoor track and field titles. He also set school records in both the pentathlon and decathlon.

No one truly knows how long they will hold a record, but to Reid it was just an amazing experience setting both of those standards.

“Setting it was the fun part,” Reid recalled. “I really didn’t know how long it would be held. It was interesting, the process of setting the records, working with the great coaches on the track team and the athletes that were on the team with me as well. It was truly fun; I was pleased that God gave me the ability to break records and do all those things that were necessary for me to do so.”

Along with his collegiate accomplishments, he was able to reach unbelievable heights in his athletic career.

His perseverance gave him the opportunity to compete in the decathlon at the 1988 and 1992 U.S. Olympic Trials. He was at the top of his game. Training and competing in Olympic trials can be a struggle for some, but Reid made the best of it.

“It was a surreal feeling, the newspapers predicted that I would win the Olympic Trials in ’88,” Reid said. The dream of victory came to an unfortunate end when he endured an injury that forced him out of the competition.

“I got injured and had to drop out after the shot-put event when I strained my lower back, so I wasn’t able to complete it,” Reid said of the ’88 Olympic Trials. After competing in the ’92 Trials, he decided to end his athletic career and put his prestigious LSU degrees to good use in two major cities.

He went on to work as the Director of Mental Health with Unity Health Care in the Washington, D.C., Department of Corrections and he owns a private practice in Annapolis. He has a true passion for what he does and takes a lot of pride in helping those around him, hoping to continue to do so for as long as he can.

One of his biggest admirers is his brother, Eric, who was inducted into the LSU Athletics Hall of Fame in 2005.

Eric Reid said of his younger brother, “I witnessed Bruce growing up, and I am a witness of the compassion, dedication and character he portrayed as a student, an athlete, and now in his professional life.”

The respect Bruce has earned from his big brother is emblematic of the strong relationship they share and reflects how much it means for them to each be members of the LSU Athletics Hall of Fame.

As a man with a dynamic demeanor and a caring heart, Bruce Reid has left a lasting impact upon his beloved university, which proudly bestows one of its highest honors upon him.