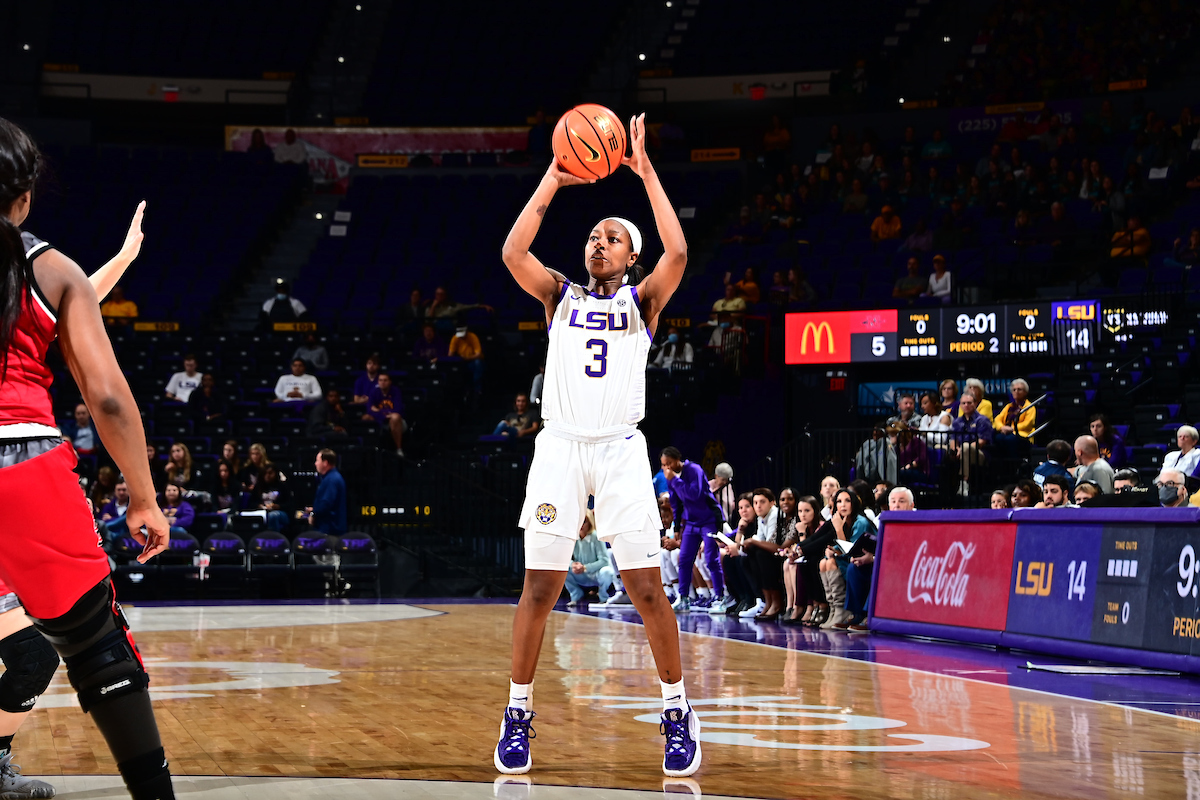 BATON ROUGE – The Kim Mulkey Era began Tuesday in the Pete Maravich Assembly center as the LSU Women’s Basketball team opened its season with an 82-40 victory over Nicholls and Khayla Pointer became the third player in program history to record a triple-double during the annual field trip game.

Pointer finished with 16 points,13 assists and 11 rebounds to record LSU’s first triple-double since Katherine Graham in 2010. Cornelia Gayden recorded two-doubles during the 1994-95 season. Faustine Aifuwa also had a noteworthy finish as she surpassed 1,000 career points, finishing the game with eight.

“When we are out there having fun, I didn’t notice when an assist happened or when a rebound happened until it got towards the end,” Pointer said. “My teammates do a great job of making me look well. I set them up for open shots, they knock down the shots sometimes and I get the rebound. I couldn’t have gotten those nor the triple double without them.”

LSU held Nicholls to 40 points, using a suffocating defensive attack and forcing the Colonels to take difficult shots. The Tigers recorded nine steals and forced 15 turnovers, holding Nicholls below 50 points for the past six matchups.

“We have to defend the entire court, the entire game no matter what the score is,” Coach Mulkey said. We have to get in that mode. We know what we face this year and how talented the teams are in the SEC.”

LSU finished the game shooting 53.1-percent from the field as well as 6-14 from beyond the arc. After a slow start in the first quarter, scoring only 12 points, the Tigers scored over 20 in the final three quarters.

In attendance for the season opener were former players Seimone Augustus and Theresa Plaisance, whose mother, DoBee Plaisance is the coach of Nicholls.

LSU will be back in action on Sunday, November 14th at 11:30am  in the PMAC as they take on the Florida Gulf Coast Eagles.

Pointer wasted no time getting the game underway in the first quarter taking a pass from Ryann Payne straight to the cup for a layup after only eight seconds elapsed. The Tigers began their season on a 6-0 run, but then went. LSU was stout defensively in the first quarter of action, as the Tigers recorded four steals while forcing eight turnovers. LSU also held Nicholls to only five points on 25-percent shooting.

Gusters, who finished with a game-high19 points, got going in the third quarter with 11 points. Pointer found her in the post numerous times as the guard had five assists in the quarter. LSU went on a 19-0 scoring run to solidify its lead.