Legendary LSU softball coach Yvette Girouard is a member of the 2021 LSU Athletics Hall of Fame induction class and will be formally enshrined on Friday, November 12, at the Manship Theater in downtown Baton Rouge. 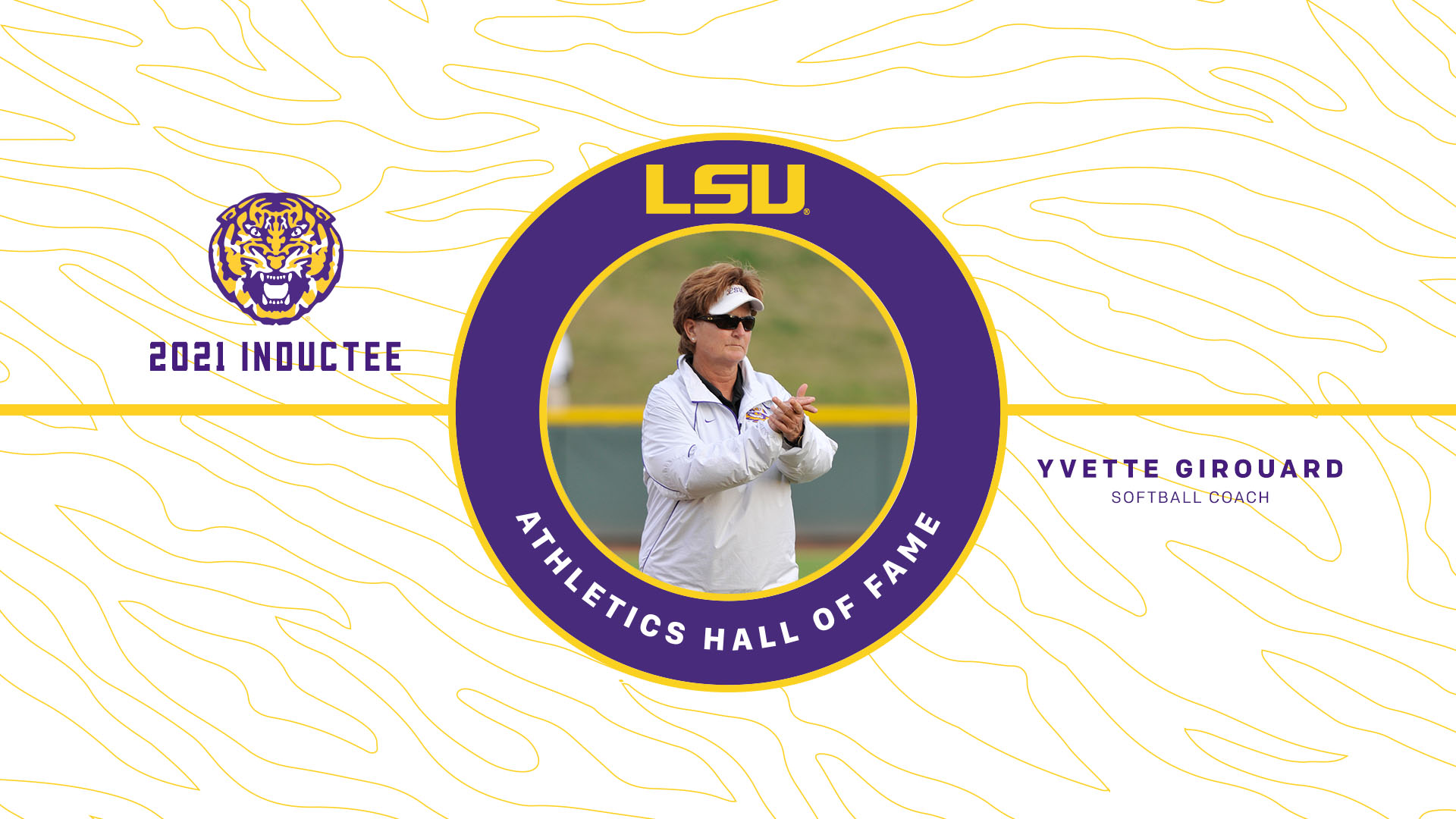 LSU softball and its stadium, Tiger Park, are nationally recognized for their greatness, but the team’s national prominence and stadium’s existence would not have been possible without one woman: Yvette Girouard.

Current LSU softball Head Coach Beth Torina describes Girouard as a legend at LSU, saying “she left her mark all over the LSU campus, with Tiger Park as her most indelible mark.”

Being elected to the LSU Athletics Hall of Fame is not Girouard’s first time being honored for her many accomplishments, though. She was named SEC Coach of the Year in 2001, 2002, 2006 and 2011.

Girouard first started coaching collegiate softball at UL-Lafayette in 1981, leading the Cajuns to three WCWS appearances in her time there. She stayed in Lafayette until the end of the 2000 season, when LSU came calling and she could not pass up the offer to travel 60 minutes east to Tiger country. From the first day she stepped onto campus, she understood exactly what it meant to wear the purple and gold.

“I’m a Louisiana girl. I know about LSU. No one had to tell me about the pride and tradition,” says Girouard. “The first time I put on all purple, I said ‘wow that’s a lot of purple’ but I got used to it.”

Girouard will be the first to admit that the transition from Lafayette to Baton Rouge was hard, but it was a challenge that she welcomed with open arms.

“It took some time,” Girouard says. “The first day I was there, the phone in my office rang and I just stared at it and finally picked it up and said, ‘LSU Softball.’”

From there, Girouard took the program to new heights. In her first season, the Tigers made a WCWS appearance. Soon after, they were back again in 2004. This put the Tigers on the map and set the stage for the program’s meteoric rise.

“Winning the SEC and going to the WCWS in her first year, she made an instant impact on the very beginnings of LSU softball,” says Torina. “She laid a foundation of expectations and set a standard that would keep this program steadfastly entrenched in the national rankings and competing for championships annually.”

When she finally retired from coaching in 2011, Girouard had an outstanding 1,285 career wins between her time at the two schools, good enough to make her the fourth-winningest coach in NCAA softball history.

Perhaps the most impressive part of her softball career, however, is the fact that Girouard never played the game of fast pitch softball. Growing up, that sport did not exist in her hometown of Broussard, La., so she played volleyball in high school and college. She learned the game of softball by joining her dad to watch the Houston Astros play baseball.

“I never played the game of fast pitch softball because we didn’t have it,” Girouard says. “My dad was a huge baseball fan, and we went to Houston every summer to watch the Astros. So, I just coached it the way I thought baseball was coached.”

In addition to her on-the-field success at LSU, Girouard was one was of the main advocates for the construction of Tiger Park, now one of the premier softball stadiums in the nation. Without her guidance and passion, the park would simply not exist.

“I’ve been building fields since I can remember,” says Girouard. “When I got to LSU, I couldn’t believe how unbelievably good the product was and how bad the facilities were. That became my driving force.”

Girouard carefully oversaw and crafted the stadium to fit the mold of a nationally recognized softball facility.

“They allowed me to design that facility. I just incorporated anything I thought would be cool,” says Girouard. “I think it is very unique and one of the premier stadiums in the country. I am very proud of the facility.”

Yvette Girouard will forever live in Tiger Park. She and the legacy of the LSU softball program will be now and forever intertwined in the bond that is formed from wearing the purple and gold. She embodied everything the university and LSU athletics stand for. But at the end of the day, as grateful as LSU is for her, she says she is just as grateful for the opportunity the Tigers gave her.

“I could not have been treated better by LSU. They treated me like a queen. You wear ‘LSU’ anywhere in the world and people know who you are,” Girouard says. “I am just so proud to have worn the purple and gold.”