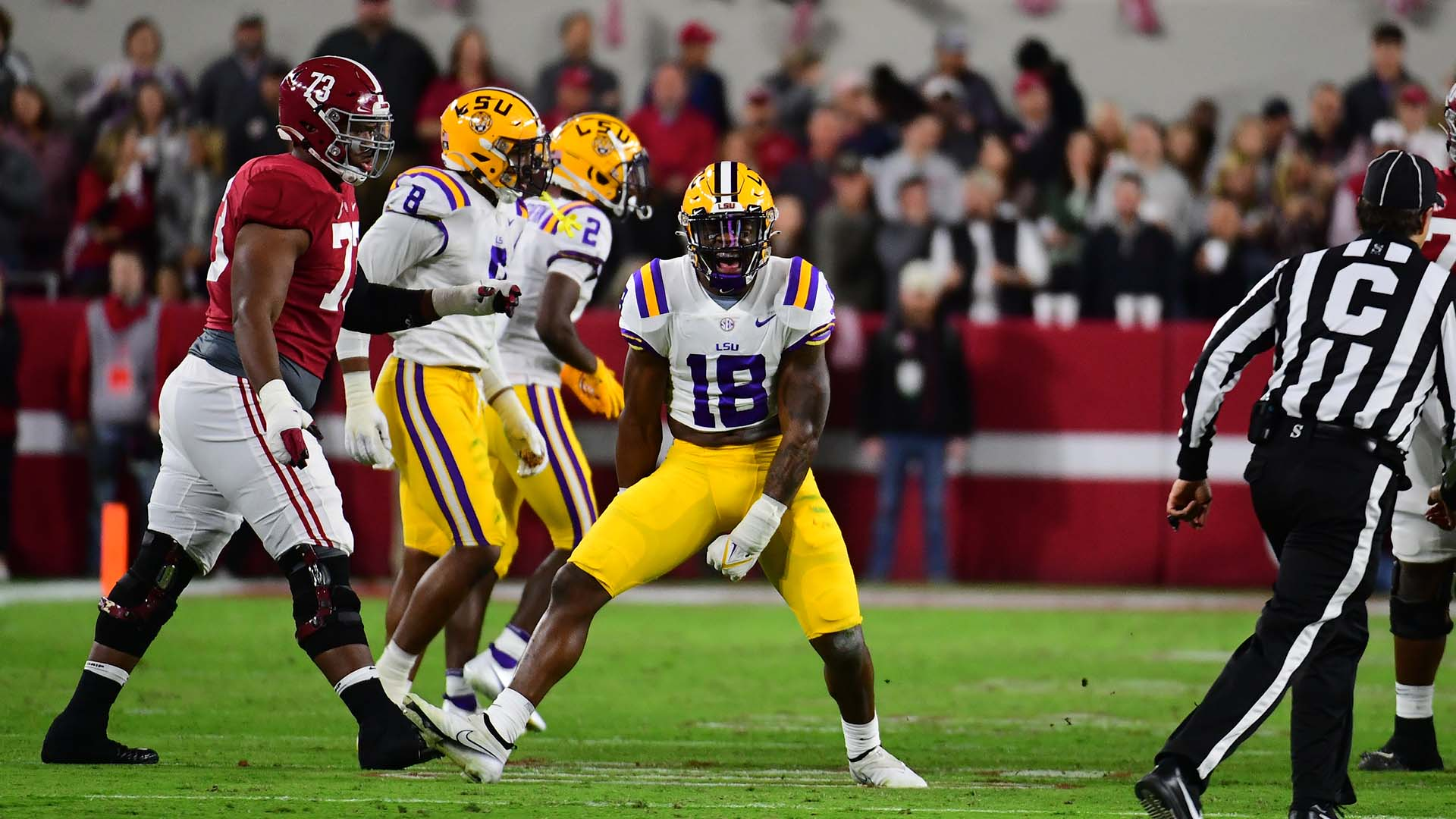 TUSCALOOSA, Ala. — With one final opportunity to win the game, quarterback Max Johnson’s pass to Brian Thomas Jr. was broken up in the end zone as time expired, as No. 3 Alabama defeated LSU, 20-14, on Saturday night at Bryant-Denny Stadium.

After jumping out to a 7-0 lead, the Tigers’ defense posted four consecutive stops consisting of two turnover of downs and two three-and-outs. LSU’s opening drive was sparked by a fake punt/jump pass from senior punter Avery Atkins to sophomore Jack Mashburn, leading to Thomas’ first career touchdown reception from 8 yards.

The Tigers’ defense held the Crimson Tide to just 6 rushing yards, tied for the fewest rushing yards in Alabama football history (1990 vs. Penn State). Damone Clark led the Tigers again in tackles with eight, also recording a sack and a pass breakup.

Alabama quarterback Bryce Young completed 24-of-37 passes for 302 yards with two touchdowns and a fumble. Receiver Jameson Williams tallied 10 catches for 160 yards and a touchdown and John Metchie posted nine catches for 73 yards and a score himself.

It will be Saturday Night in Death Valley when the Tigers take the field next Saturday in Tiger Stadium against Arkansas. Kickoff is set for 6:30 p.m. CT on ESPN and the LSU Sports Radio Network.

Tickets are on sale now at LSUtix.net.

LSU won the coin toss and elected to defer to the second half.

Following an Atkins touchback, the Tide overcame an early drop on first down with a 22-yard reception to John Metchie. Young also found Jameson Williams for 11 yards and a first down, bringing Alabama inside LSU territory to the Tiger 32-yard line.

On 3rd-and-2, Young’s pass to Metchie fell incomplete. On 4th-and-2, Will Reichard’s field goal attempt for 49 yards hit the crossbar and bounced harmlessly away. LSU took over on downs.

Johnson connected with Bech for a 10-yard pickup, but that was all for the Tigers on the drive. On fourth down, Atkins took the deep snap, ran toward the line of scrimmage and completed a jump pass to Mashburn for 10 yards, giving a first down to LSU.

It marked the first completion by an LSU punter since Brad Wing in 2012 vs. Alabama (on an unsuccessful fake FG); it was the most recent completion on a fake punt since Brady Dalfrey in 2008 Chick-fil-A Bowl vs. Georgia Tech (21 yards to Chad Jones).

On third-and-2, Johnson’s pass was completed to Thomas for an 8-yard touchdown. With Cade York‘s school record-setting 110th-consecutive PAT, the Tigers took a 7-0 lead with 8:33 remaining in the quarter.

Alabama was flagged for a false start to open the second quarter. Young then found Metchie for a 14-yard connection on first down and Robinson moved the chains with a 1-yard gain.

Clark recorded a tackle for loss, followed by a pass breakup from Micah Baskerville on fourth down. LSU’s offense took over on downs at their own 39-yard line with 11:55 remaining in the quarter.

Davis-Price picked up a first down with a four yard carry, followed by an eight yard carry. However, on third down, Johnson’s pass to Thomas Jr. was not enough to move the chains and the Tigers were forced to punt. Atkins’ punt had Alabama starting at their own 23.

Young’s pass to Roydell Williams for 24 yards set up the Crimson Tide at the LSU 24-yard line. Robinson rushed for a 2-yard gain and touchdown to tie the game at seven a piece with 2:52 left.

Johnson’s pass on third-and-4 was intercepted by Jayln Davis-Armour to give the Tide a short field at the LSU 39. On 3rd-and-8, Young’s pass was complete to Metchie for an 8-yard touchdown to give Alabama a 14-7 lead with 48 ticks left.

LSU was able to pick up a first down with Johnson connecting with Jaray Jenkins for a 16-yard pickup, but Davis-Price rushed for 11 yards and fumbled, giving Alabama the ball at the 42.

Young then found Williams for a 58-yard completion and touchdown to extend the lead to 20-7 with 12:51 remaining in the quarter. The PAT was pushed to the right.

Johnson and the Tigers responded and put together a methodical drive, going 14 plays for 89 yards, spanning five minutes and fifty five seconds. Johnson went 6-of-7 for 57 yards and a touchdown. With the score, LSU trailed Alabama 20-14 with 2:27 remaining in the third quarter.

Neil Farrell Jr. recorded a sack and Young’s pass on third down was completed to Robinson, but was short of the line to gain, forcing an Alabama punt.

Johnson’s pass was complete to Bech for a 1-yard gain before the third quarter concluded.

LSU was not able to pick up the first down to open the fourth quarter. Johnson’s pass to Malik Nabers was incomplete, forcing Atkins to punt.

LSU’s defense continued to hold strong and was able to get another stop, by way of a Farrell tackle and Jaquelin Roy sack. The Tiger offense took over at their own 19-yard line with 12:36 to go in the game.

On third down, Johnson found Bech for a 14-yard connection and first down to keep the drive alive. On the following play, Johnson found Jontre Kirklin for a 6-yard pickup.

Davis-Price broke one open on 4th-and-1 — a 37-yard gain and nearly took it the distance.

On fourth down with 5 seconds to play, Johnson’s pass to Thomas was broken up by Brian Branch to give Alabama the win, 20-14.