Preview: Tigers Travel to Tuscaloosa to Face No. 3 Alabama 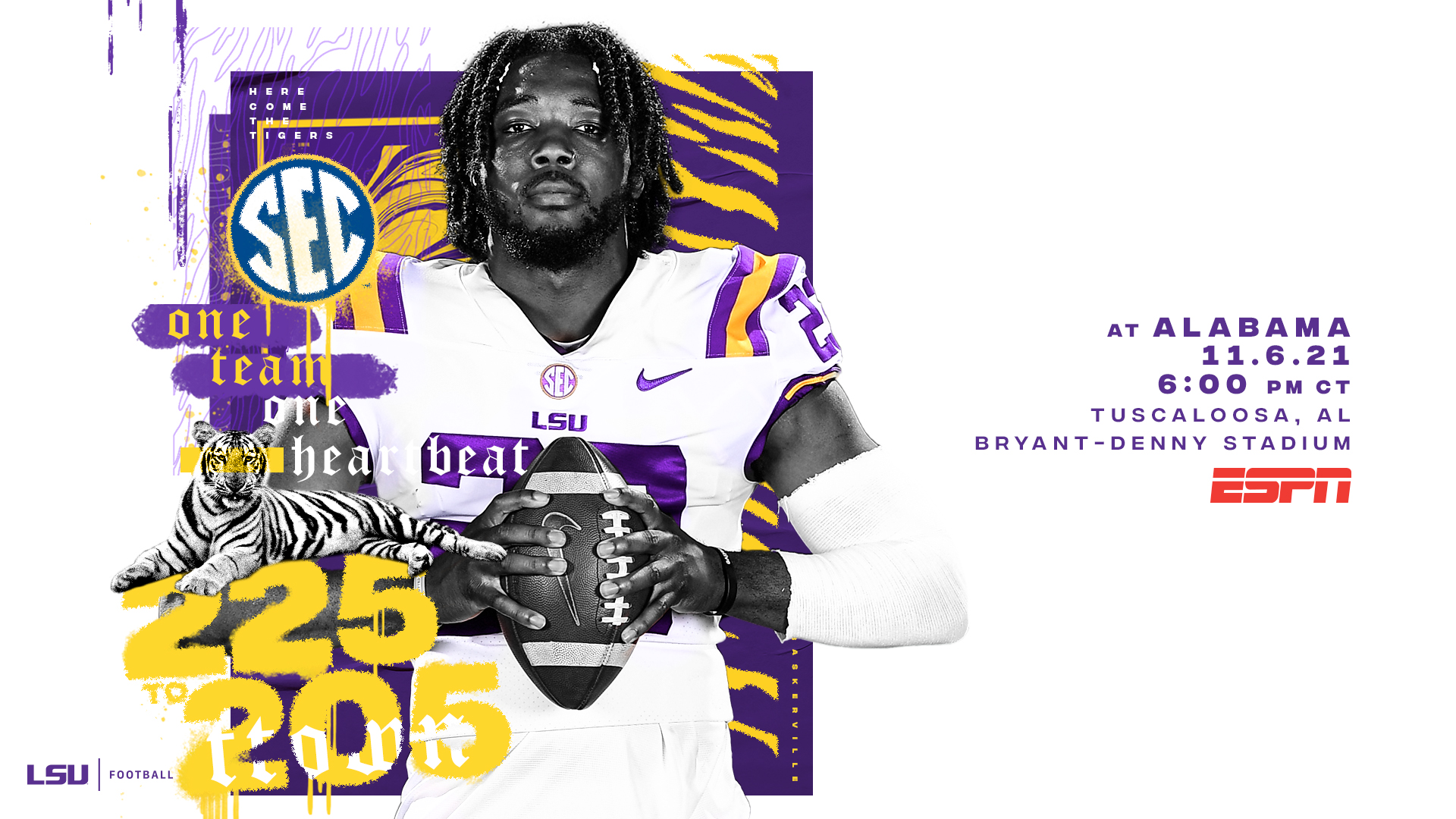 Kickoff is set for 6:05 p.m. on ESPN and the LSU Sports Radio Network.

The Tigers have fond memories of their last trip to Tuscaloosa and board the plane with similar intentions on Friday afternoon. After the bye week, LSU looks to make improvements in all three phases after a 31-17 loss to Ole Miss.

Ready For Tuscaloosa
One Team. One Heartbeat. pic.twitter.com/rP1xaSyqWy

Senior linebacker Damone Clark currently leads the nation in total tackles with 99 and was announced as a Butkus Award semifinalist on Tuesday. Against the Rebels, Clark registered a career-best 20 tackles, 2.5 for loss, a sack and a forced fumble. He’s playing like an All-American, and the Baton Rouge native is showing no signs of slowing down.

“He identified some things that he needed to get better at (this offseason),” said head coach Ed Orgeron of Clark. “One was open-field tackling. He’s gotten a lot better at that. Two was his pass coverage. He’s worked on his flexibility. He’s just a great Tiger. I can’t say enough good things about him.”

Neil Farrell Jr. is another defender playing his best football as a Tiger. The senior from Mobile, Alabama, will be going home Saturday and looks to add to his impressive 2021 campaign. Farrell Jr. currently has 28 tackles and a sack, but his impact up the middle has gone far beyond the box score.

Quarterback Max Johnson said on Thursday that the bye week was a productive self-scouting period for the Tigers. He’s excited to have an opportunity to fight for sixty minutes with his teammates and try to get some bad taste out of their mouths.

“It was a self-scouting time for us,” said Johnson. “It was a time for some rest, to get our bodies healthy. We’re looking forward to this Saturday.”

The Tigers will look to find talented freshman receivers like Malik Nabers and Jack Bech in the passing game, two players that have improved week-by-week. Nabers recorded four receptions and a touchdown against Ole Mis. Bech tallied four catches himself for 41 yards.

“Obviously, this is a big game for us,” Orgeron said. “We’re playing them on the road, they have a great atmosphere there. Their offense is averaging 46 points per game. Bryce Young is a great quarterback. He’s mobile and accurate. Brian Robertson is a really impressive running back.”

The Tide defense is stout, too, holding opponents to 21.0 points per game, with eleven interceptions, currently plus-seven in the turnover ratio.

“They are strong in the middle,” Orgeron said on Alabama’s defense “As strong as they’ve been. Their corners are great players. Very talented football team and well coached.”