LSU football All-American Billy Truax is a member of the 2021 LSU Athletics Hall of Fame induction class and will be formally enshrined on Friday, November 12, at the Manship Theater in downtown Baton Rouge. 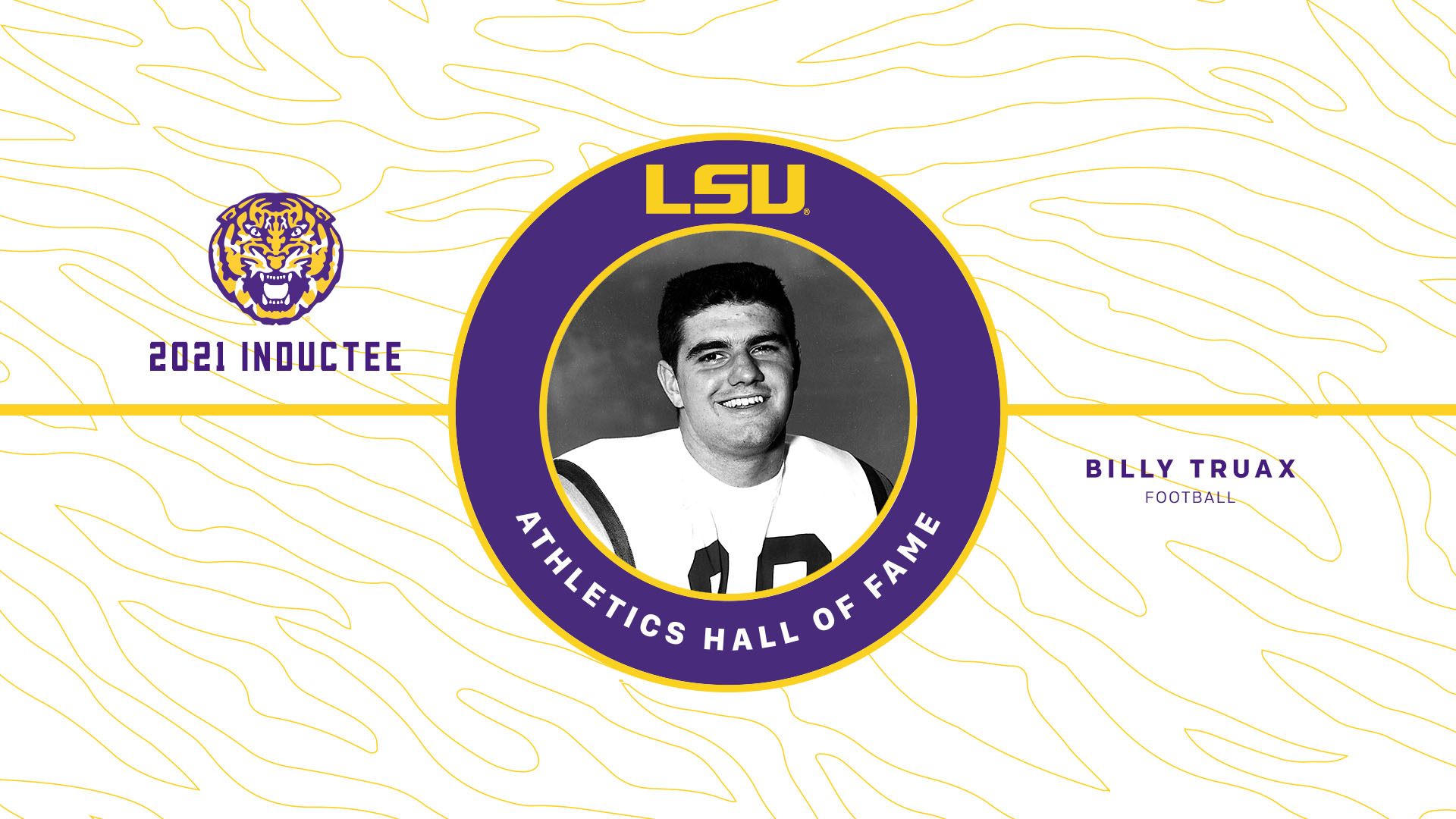 LSU football All-American Billy Truax is a member of the 2021 LSU Athletics Hall of Fame induction class and will be formally enshrined on Friday, November 12, at the Manship Theater in downtown Baton Rouge.

Playing tight end in the early 1960s could at times be a sourceof frustration for a talented collegiate student-athlete. The passing game was still regarded as more of a novelty by most college coaches, who felt that the chances of misfortune increased significantly with the football in the air. The tight end was viewed as another offensive tackle who was eligible to catch passes on rare occasions.

LSU tight end Billy Truax, however, embraced his role and helped lead the Tigers from 1961-63 to a 26-6-1 record, an SEC championship and victories in the Orange Bowl and Cotton Bowl.

“I probably didn’t really dwell on it much and did what I was told to do,” explained Truax, who was voted First-Team All-American and All-SEC in 1963. “It was a pretty simple offense, and I only had a couple of routes. I don’t think I dropped any, because there weren’t that many thrown to me. You knew you couldn’t drop it because you may not see the football again if you did.”

LSU threw the ball less than 10 times per game in those days; in fact, in the their 10-7 win over second-ranked Ole Miss in 1961, the Tigers completed exactly one pass – a fourth-down strike to Truax that kept the game-winning touchdown drive alive. The triumph over the Rebels was LSU’s signature victory on its way to the SEC Championship, an Orange Bowl win over Colorado and a 10-1 final record.

“In 1961, we had a great recruiting class, a lot of guys from all over the state,” Truax, who prepped at Holy Cross High School in New Orleans, recalled. “There was no friction within the team; we all believed in hard work, and the coaches worked the hell out of us. That allowed us to outlast our opponents in the fourth quarter.”

Coach Paul Dietzel, who had directed LSU to the 1958 National Championship, left Baton Rouge after the ’61 season to become the head coach at Army, and defensive coordinator Charles McClendon was promoted to head coach of the Tigers.

“I think we threw the ball even less than we did with Dietzel,” Truax laughed as he recalled his playing time under McClendon. “Coach Mac was more of a defensive guy, very fundamental. But, the coaching transition was rather smooth; I think most of the assistant coaches stayed, and we ran basically the same system.”

The 1962 Tigers capped a 9-1-1 season with a resounding 13-0 victory over No. 4 Texas in the Cotton Bowl, and the ’63 team – with Truax serving as team captain and playing both tight end and defensive end – earned an appearance in the Bluebonnet Bowl in Houston.

Truax was the second-round selection – 26th pick overall – of the Cleveland Browns in the 1964 NFL Draft, and he was traded later that year to the Los Angeles Rams. The Rams endured subpar seasons in Truax’s first two seasons in Los Angeles, but his career, and the culture of the team, were transformed by the arrival of head coach George Allen in 1966.

Allen had worked as the defensive coordinator of the 1963 NFL Champion Chicago Bears, and in his gameplan preparation each week, he saw how a pass-catching tight end could create difficult coverage matchups for linebackers and safeties. The Bears themselves had an All-Pro tight end in Mike Ditka, so when Allen became the Rams’ head coach, he recognized Truax as a player that could help NFL passing games evolve.

“NFL teams watched what everyone else was doing, and they began to throw the ball to the tight end,” Truax said, recalling that there were a number of players emerging as receiving threats at the position, including Ditka, Ron Kramer of the Packers, John Mackey of the Colts and Jackie Smith of the Cardinals.

“Coaches still kept passes to a minimum to avoid any mistakes, and we were still primarily used for blocking, but they began to realize that the tight end could become a more prominent part of the offense. The tight end provided another avenue to throw to and move the chains for first downs. That’s how I made my living for five years with George Allen; I pretty much owe everything I got in the NFL to him and that opportunity to play.”

Coach Allen’s son, George, the former governor of Virginia and U.S. Senator from 2001-07, said his Dad possessed “much affection, gratitude and love for Billy Truax.”

“In a Rams team filled with big personalities of the likes of Deacon Jones, Roman Gabriel and Merlin Olson,” the younger Allen said, “Billy Truax was consistently a humble, beloved teammate and player who always did his job with cheer, perseverance, 110% effort and attention to every detail that my father tried to get from every player, coach and staff member.”

In his five years under Coach Allen with the Rams, Truax caught 174 passes for 2,069 yards and 15 touchdowns in 60 games.

“I’m proud of being one of the better tight ends in the league at that time,” Truax said. “I held up my end of the deal and felt I out-performed most of the guys that we played against.”

The Rams were one of the NFL’s premier teams in the five-season Allen era, posting double-digit wins three times and winning two division titles. The 1960s was a watershed time for the emerging NFL, as expanded network TV contracts opened the league to a larger audience and significantly elevated its popularity.

“Los Angeles in the ‘60s was a lot of fun, and the NFL was coming of age with television,” Truax said. “As a West Coast team, we were often the last game of the day, and I remember that my Dad was able to watch many of our games on TV.”

Allen left the Rams after the 1970 season, and Truax played the final three years (1971-73) of his NFL career with the Dallas Cowboys, where he was coached by another pro football legend, Tom Landry.

“The Dallas system was totally different from the system in Los Angeles,” Truax said. “The offense was a bit more open because we had great speed at wide receiver with Bob Hayes and Lance Alworth, and our quarterbacks were Craig Morton and Roger Staubach. Landry implemented some of the schemes that had been prominent in the AFL, which featured more passing offenses. But, he was still very careful; he had to really trust you to throw the ball to you.”

The Cowboys’ roster also included Ditka, who teamed with Truax to give Dallas a potent combination at tight end. The ’71 Cowboys culminated their season with a Super Bowl VI win over the Miami Dolphins at Tulane Stadium in New Orleans, the city in which Truax once excelled as a high school player.

After 10 seasons in the NFL, Truax retired and built a highly successful commercial real estate business in the Gulf Coast region. When Hurricane Katrina devastated the area in 2005, he re-located to Kearney, Neb., where he now resides near family members.

One of his sons, Chris, was a four-year letterman at offensive guard for LSU and a member of the Tigers’ 1988 SEC Championship team. Chris currently works as the offensive line coach at McNeese State in Lake Charles, La.

Billy Truax’s induction into the LSU Athletics Hall of Fame punctuates a nearly 70-year relationship with the university that began when his Dad took him to Tiger Stadium as a young boy for an LSU-Tulane game.

“I was just amazed at the grandeur of the campus, all the big buildings,” Truax remembered. “Then, we went to the football stadium, and I knew then that this is where I wanted to be, I wanted to play football in this stadium for LSU.”

In high school, he received offers to play at Army, Navy, Notre Dame, and several SEC schools, but he chose to fulfill a dream and enroll at LSU. Since then, he has brought honor to the university through both his athletic achievements and his sincere impact upon the lives he’s touched.

“Billy Truax has been a great ambassador for LSU,” Louisiana Gov. John Bel Edwards said. “His love of his alma mater has never wavered, and his life has been an excellent representation of the class and integrity expected of an LSU alumnus and as a leader in today’s society through his accomplishments as a commercial realtor. Through the years, there has not been a blemish to his personal integrity or to his career.”

Truax said when he thinks about his induction into the LSU Athletics Hall of Fame, he imagines how thrilled his late parents would be that their son had earned such a prestigious distinction.

“This honor from LSU, that’s a legacy, and my family and I are so proud that our name will be in the LSU records forever,” Truax said. “It’s a singular honor, something I’m humble about and very, very excited to be a part of.”