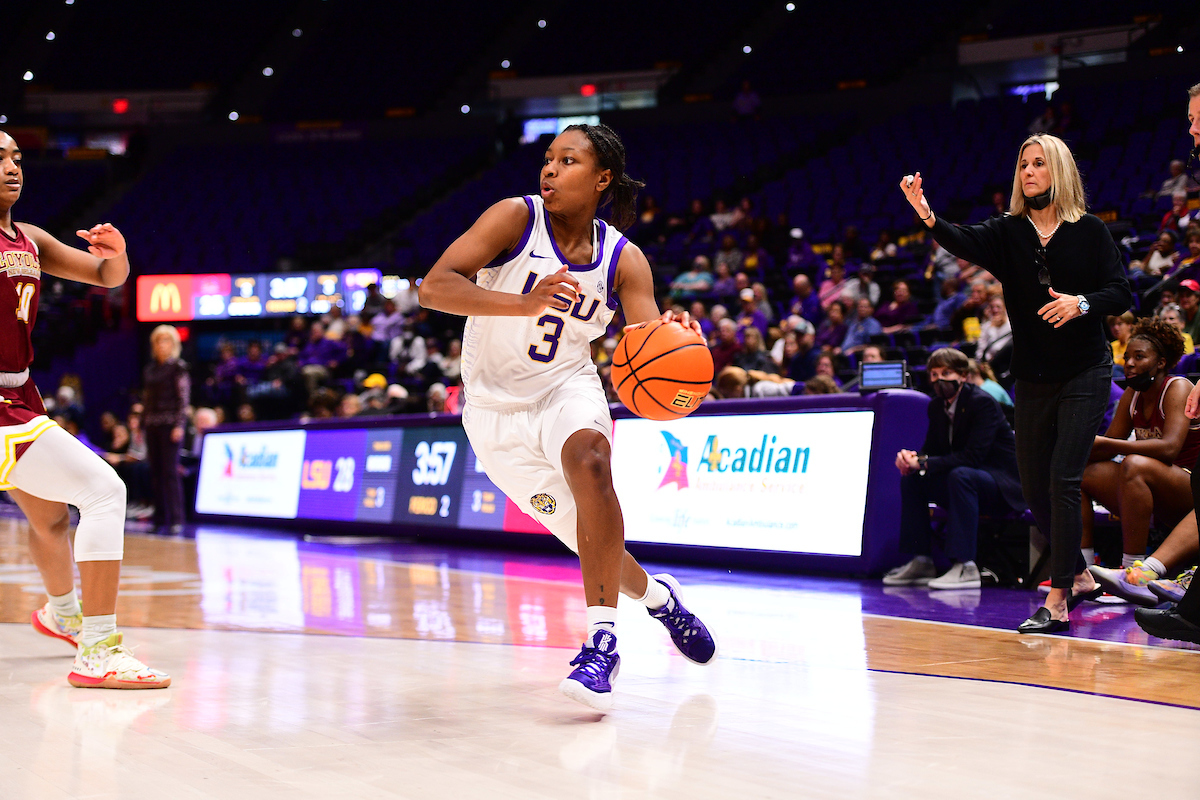 “Every time we get on the floor, we get better,” said head coach Kim Mulkey. “We are scoring a lot of points in the two exhibition games, but I still feel like, honestly, our defense is really wearing people down.”

Preseason All-SEC guard Khayla Pointer was impressive once again after leading LSU during Saturday’s win over Langston. Pointer guided the Tigers to victory through her incredible offensive skill set. Using both the three-ball and her collection of inside moves, she notched 24 points, 5 rebounds and 2 assists while shooting 58-percent from the floor.

Autumn Newby, the graduate transfer from Vanderbilt, hit the offensive glass hard again. After a 16 rebound (12 offensive) performance on Saturday against Langston, Newby continued her relentless rebounding, grabbing eight boards just in the first half and finishing with 12 (11 offensive.)

​​“I just try to go out there and play as hard as I can,” Newby said. “One of my specialties is rebounding so I know that I bring that to the team every night; offensively and defensively.”

All 11 players that saw the court for the Tigers scored the ball. The Tigers shot 47.9-percent from the field and held Loyola to just 31.3-percent. LSU forced 29 turnovers and scored 36 points off turnovers, but the Tigers did turn the ball over 20 times themselves.

Loyola, the Preseason No. 23 team in the NAIA rankings, gave LSU its best shot. Ultimately, the Tigers outlasted the Wolfpack in the second of two preseason exhibitions and now LSU’s eyes are on Tuesday, November 9 when the Coach Mulkey Era officially begins in Baton Rouge with the Tigers set to host Nicholls at 11 a.m. CT for the annual field trip game.

The Wolfpack saw solid performances from their scoring leaders senior guards Tay Cannon and Kennedy Hansberry. Cannon gave the Tigers trouble from behind the arc making all three of her attempted three pointers as she finished with 15 points and 3 assists. Hansberry finished with 12 points and 5 rebounds.

Senior guard Sarah Shematsi jump-started the Tiger offense with two three pointers in the first two minutes of play, but the Wolfpack hung around early. Loyola shot a hot, 80-percent from behind the arc in the game’s opening quarter and held a lead for a majority of it. As time ran down though, Pointer pulled up from deep to give the Tigers a 20-19 lead after one.

The Wolfpack hung around and kept it tight until about midway through the second quarter. With the score tied at 25, LSU went on a 17-1 run and held Loyola without a field goal for the final 6:28 before halftime. Pointer had 18 first-half points on 60-percent shooting and she had 10 points during the Tigers’ late-half run. Senior guard Jailin Cherry picked up where she left off defensively against Langston by recording six steals in just the first half of action. Loyola cooled off significantly following their hot first quarter as LSU held the Wolfpack to 6-percent shooting in the second quarter. LSU led 42-26 going into the locker room.

With five minutes remaining in the third quarter, Newby flashed her passing game after a hard-fought offensive rebound with a brilliant flick to Hannah Gusters down low for her third assist of the game, leading to an and-one finish as LSU was mounting another burst of scoring. LSU’s 12-0 run ended when Loyola’s point leader Tay Cannon hit a corner-three. The Tigers extended their lead to 67-34 with a 10-0 run over the last 3:00 of the quarter, capped off by a 10-foot straight-away jumper from Awa Trasi.

The fourth quarter saw freshman Timia Ware making her mark on the game for the Tigers by nailing two three-pointers and a layup to finish with 9 points on the day. Both of Ware’s treys were second-chance opportunities. Ajae Petty and Amani Bartlett also each contributed 4 points of their own in the final quarter of play.