LSU men’s track & field sprinter Lloyd Wills, the university’s first Black student-athlete, is a member of the 2021 LSU Athletics Hall of Fame induction class and will be formally enshrined on Friday, November 12, at the Manship Theater in downtown Baton Rouge. 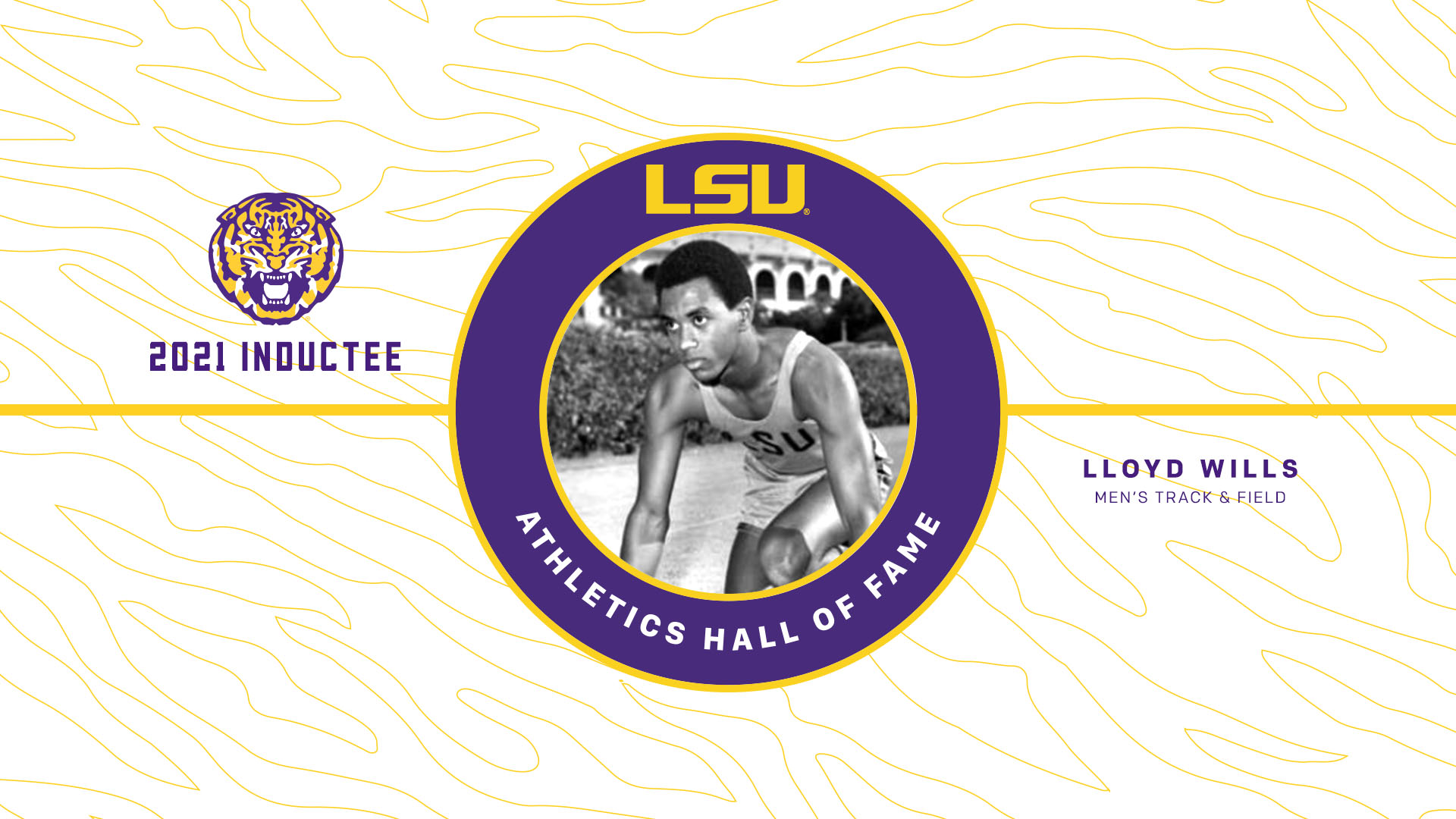 LSU men’s track & field sprinter Lloyd Wills, the university’s first Black student-athlete, is a member of the 2021 LSU Athletics Hall of Fame induction class and will be formally enshrined on Friday, November 12, at the Manship Theater in downtown Baton Rouge.

History maker. A phrase to describe Lloyd Wills before he broke any records on the track.

The New Orleans, La., native attended George Washington Carver High School, where the track & field star graduated in 1969 and was a two-time All American. His success in high school presented him with 30 scholarship offers, including SEC powerhouse Tennessee, who possessed one quality that many other schools did not.

Tennessee had African-Americans on its team.

Wills had a good friend that was already committed to LSU, Al Coffee. Coffee convinced Wills that adding him to the team would create a great 1-mile relay, but perhaps the most significant aspect of Coffee’s invitation was the fact that Coffee was white. Wills felt welcomed, at least by him.

In addition to his friend’s recruitment, Louisiana Gov. John McKeithen himself asked Wills to attend LSU.

“They brought me to the governor’s mansion, and they assured me everything was going to be okay,” Wills said. “He said if anything happened to call him personally. If I had the governor on my side, what more did I need?”

Instead of joining the crowd at Tennessee, Wills decided to pave a new way. In 1969, he chose LSU, which made him the university’s first African-American student to compete in varsity athletics.

“It didn’t matter to me. I just wanted to make sure it was a good fit,” Wills said on his feelings about being LSU’s first Black athlete. “I didn’t even know I was going to be the first Black student-athlete. I wasn’t the first one to sign because I didn’t want to sign anything until I saw the campus. They signed a sprinter from Shreveport first, but he ended up having some academic issues, and had to sit out a semester. So, I ended up being the first Black scholarship athlete to compete at LSU.”

Although Wills did not see his decision to be as monumental as it was, others took note.

“Instead of taking the route of least resistance and electing to accept the Tennessee scholarship, which already fielded a team of several African-American athletes, Wills chose to stay at home in order to help elevate his state’s flagship university to national prominence,” said Keith Ballard, an LSU Track & Field official.

“Lloyd Wills was the first, and true trailblazer, in opening up LSU athletics to the Black athlete,” said Walter Millet, Wills’ teammate.

Wills is grateful to have had such a pleasant experience as a Black student-athlete during a time when he was certainly at risk for harm. Although a few encounters occurred, Wills was treated quite fairly by athletic director Carl Maddox and the athletic department as a whole.

One of the lowest points for Wills came in his freshman year during the 1970 SEC Championships. Wills was running the 440-yard dash when he broke his leg in the middle of the race. The injury was not only gruesome in itself, but it also revealed things of which Wills was entirely unaware.

“That’s when I found out that there were death threats on me,” Wills said. “When I went down, my coaches thought I had been shot.”

After having to push his bone back in his leg himself, Wills was still able to find the silver lining of his injury. He was competing during the Vietnam War, a time when the draft was still in place. Wills had a low number, and low numbers were typically selected first. His grades were not high enough to exempt him from the draft, so Wills was ordered to report and enter the Army. However, his injury may have spared him.

“When I showed up to report in New Orleans, I had a cast on my leg,” Wills said. The sergeant grabbed my papers, and said, ‘Get out of here.’ I got my grades up after that. I think it saved my life because everyone I knew that went to Vietnam ended up dead within a week or two. That’s why I don’t question things like that. Everything happens for a reason.”

Despite attending LSU during Louisiana’s most racially tense period and suffering a traumatic injury in his first year, Wills remained focused and excelled on the track. By the end of his career in 1973, Wills had 54 first-place finishes, 12 LSU records and three SEC records. He was a five-time SEC Champion, 10-time First Team All-SEC selection and a four-time All- American in the 440-yard dash and 1-mile relay. Wills anchored LSU’s 1-mile relay team to a Drake Relays national championship in 1972, which clocked in as the fastest time ever by an SEC school. Also in 1972, Wills was ranked 16th in the world for the 440-yard dash.

The long list of accolades prove Wills was exceptional at his craft. However, he never gave the awards nor the wins a second thought. To him, it was his job: to get a degree, and to run track. He just happened to be really, really great at the latter.

His humility spoke volumes. Even though he was a standout in his sport, many people were still unaware of him.

“During Wills’ tenure at LSU, he developed into the most transcendent student-athlete that most Tiger fans never heard of,” Ballard said.

“Mr. Wills represents everything that is great about LSU,” said Collis Temple Jr., another African-American student-athlete that was the first, along with Wills, to get a degree from LSU. Temple Jr. credits Wills with paving the way for him and others at LSU, amidst the social challenges they faced as Africa- Americans.

“I wouldn’t have guessed in a million years that he was a star athlete because he handled himself with class, dignity and humility,” Temple Jr. said. “Nobody in LSU’s history wore the Purple and Gold better.”

Wills was not only an incredible talent athletically, but is also highly favored for his character. As a child, he dreamed of becoming a pilot, which pushed him to join the Air Force ROTC once he got to LSU. Wills discovered the military was not for him, and was then faced with the challenge that many African-Americans of his time dealt with: a lack of work opportunities.

“There were not a lot of options back then, but teaching was still my number one,” Wills said. “I saw a Black bus driver for the first time when I was 14 or 15, and I sat right behind him. He was like a pilot to me. It was so great seeing a Black person doing work besides manual labor.”

The teenager took this motivation all the way through to receiving his degree in education from LSU.  He became a teacher, a decision that was driven by the coaches who heavily impacted Wills’ life.

“All of the best people I knew were teachers,” Wills said. “I had great parents; I loved them to death and they were good to me. Outside of the home, my coaches were a cut above everything. They taught me how to be a man. It was outside of the skills. Once I got the chance to go to college, which I didn’t think was going to happen until my junior or senior year of high school, I knew I wanted to try to be like them.”

Wills won the 2002 Teacher of the Year award from Orleans Parish School Board. In 2010, Wills received the Trailblazer Award from the LSU Chancellor’s Office, and the Torch Bearer Award from LSU Track & Field for demonstrating exceptional courage and bravery as an ethnic minority. He was then named the Volunteer of the Year in 2018 by the St. Bernard Parish School District for his work with the football team.

The epitome of working hard in silence, Wills never expected nor wanted to pour into the community just for recognition. He tried to teach his own kids and the ones he worked with that it is important to give back and pay it forward. However, he was surprised to receive the awards he did. Wills never thought anyone noticed, but people did. And he deserved the acknowledgement.

His big heart allows him to stay connected with his teammates weekly, long after their days on the track came to an end. Athletics meant the world to Wills, and he would have loved to run at the next level if the opportunity presented itself back then. His sport aside, Wills’ greatest accomplishment is still his LSU degree.

“I accomplished my goal of getting a degree,” Wills said. “Athletics is great, but we all know it doesn’t last that long. But, you get a degree and it takes you far.”

Wills is a quiet soldier who was an instrumental piece in LSU’s athletic and academic history. He may never realize it, but his impact on the university will always be felt.