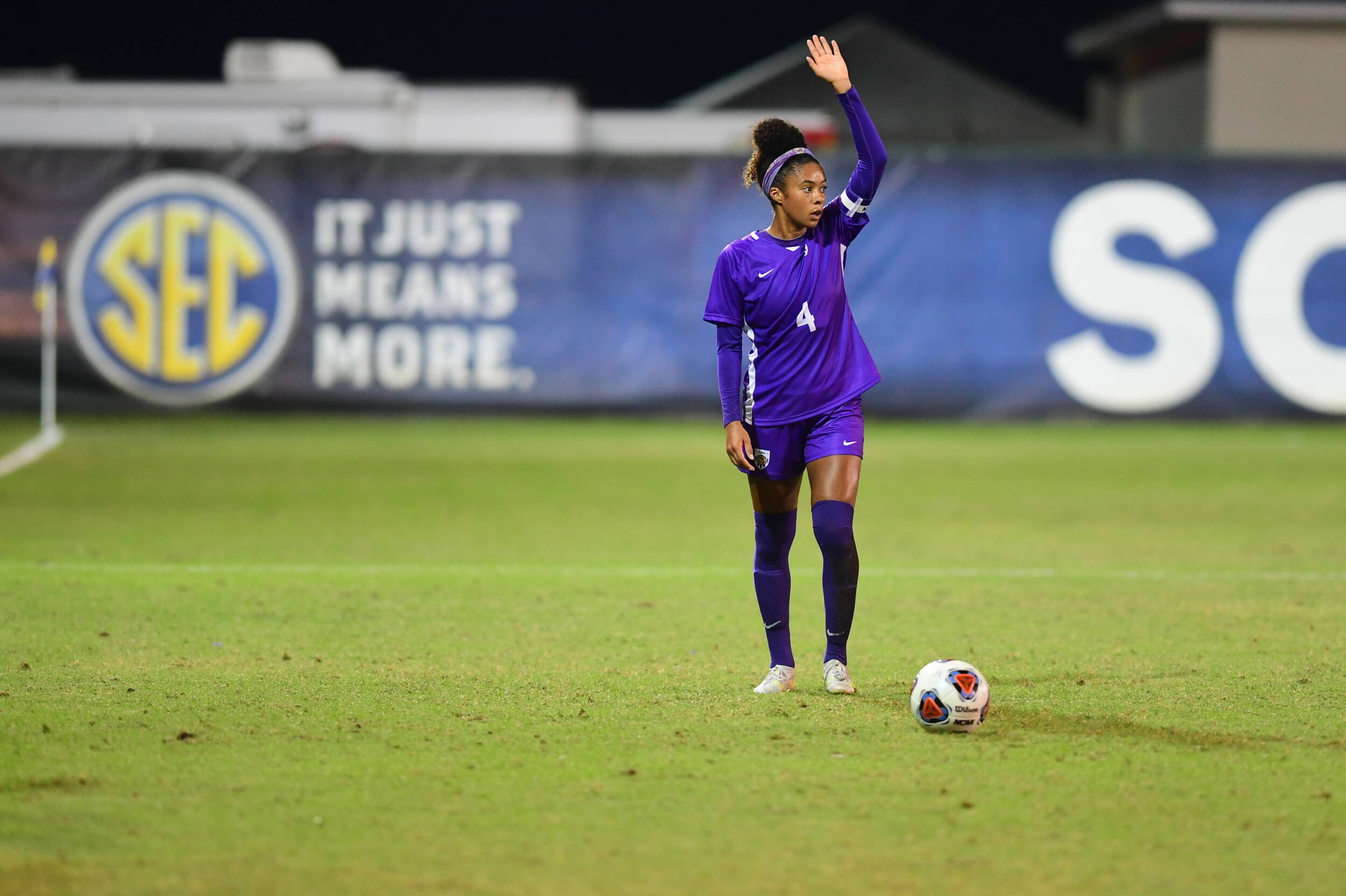 Orange Beach, Ala. – The 9th seeded LSU Soccer team (11-7-1) was defeated by the top seeded Arkansas Razorbacks (15-3-0) by a score of 2-1 in the quarterfinal round of the SEC Tournament on Tuesday night at the Orange Beach Sportsplex.

“As the game went on, I thought we got more comfortable in possession and were able to break lines,” head coach Sian Hudson said. “I thought we had five or six big moments entering Arkansas’ defensive third and we didn’t really capitalize until that final minute.

“Overall, it’s been a great season for us. I think we’ve done enough to get in the national tournament. You’ll never know until selection day, but we’ve accomplished some big things this season. We’ll get back to Baton Rouge and prepare like we have more games ahead of us.”

Anna Podojil opened the scoring in the 18th minute with a tidy finish before doubling her goal tally in the 61st minute from a Razorback corner. Defender Shannon Cooke grabbed a consolation goal in the 90th minute as she headed home a cross from forward Tinaya Alexander.

Arkansas grabbed the first goal of the match in the 18th minute. Podojil found herself on the end of a through ball and shouldered off her defender to slot the ball into the back of the net from 11 yards out.

The Tigers chased for an equalizer the rest of the first half. Defender Maddie Moreau led a counterattack in the 27th minute and found Alexander, who could not get a shot off before the goalkeeper bravely claimed the ball. Midfielder Athena Kuehn had the best look of the half for the Tigers in the 37th minute as she carried the ball into the final third and hit a ground shot from the top of the box that narrowly trickled wide.

Goalkeeper Mollee Swift picked up two saves in the second half as she denied two shots on frame in the 61st minute.

The Tigers had a counter attack in the 60th minute after a throw in from Arkansas. Taylor Dobles cleared the ball out of the box to Tinaya Alexander, who dummied the ball, and started carrying the ball down the pitch. She carried the full length of the field after that and took a shot from just outside the 18 with her right foot that sailed high.

The second goal of the night came in the 61st minute shortly after Swift’s two saves. Arkansas swung in the corner and the ball was headed on by Reagan Swindall, with the header getting redirected by Podojil and into the goal to give Arkansas a 2-0 lead on the night.

LSU did not lose their intensity as they searched for a lifeline goal. Midfielder Chiara Ritchie-Williams hit a longshot in the 78th minute that forced a diving save from Arkansas Hannah Warner. Alexander was in possession of the ball in the 88th minute and cut inside on her left foot to hit a shot from 15 yards out that Warner caught.

The Tigers got their goal on the night with 40 seconds left in the match. Alexander found space on the right flank and lofted a cross to the far post that Cooke pounced on with a header to cut the lead to 2-1. The goal is Cooke’s third on the year, and Alexander’s team-leading sixth assist on the year. With the assist, Alexander’s career tally now sits at 22, which moves her into second on the All-Time LSU Assist List.

Up Next
LSU will await the NCAA Selection Show which will take place on Monday (November 8) at 3:30 p.m. CT. The Tigers, who boast a resume with four top 25 wins, have positioned themselves in a great spot to get an at-large bid to the NCAA Tournament. Sixty-four teams will make the tournament with 32 teams earning autobids from winning conference titles, and 32 teams will get at-large bids.