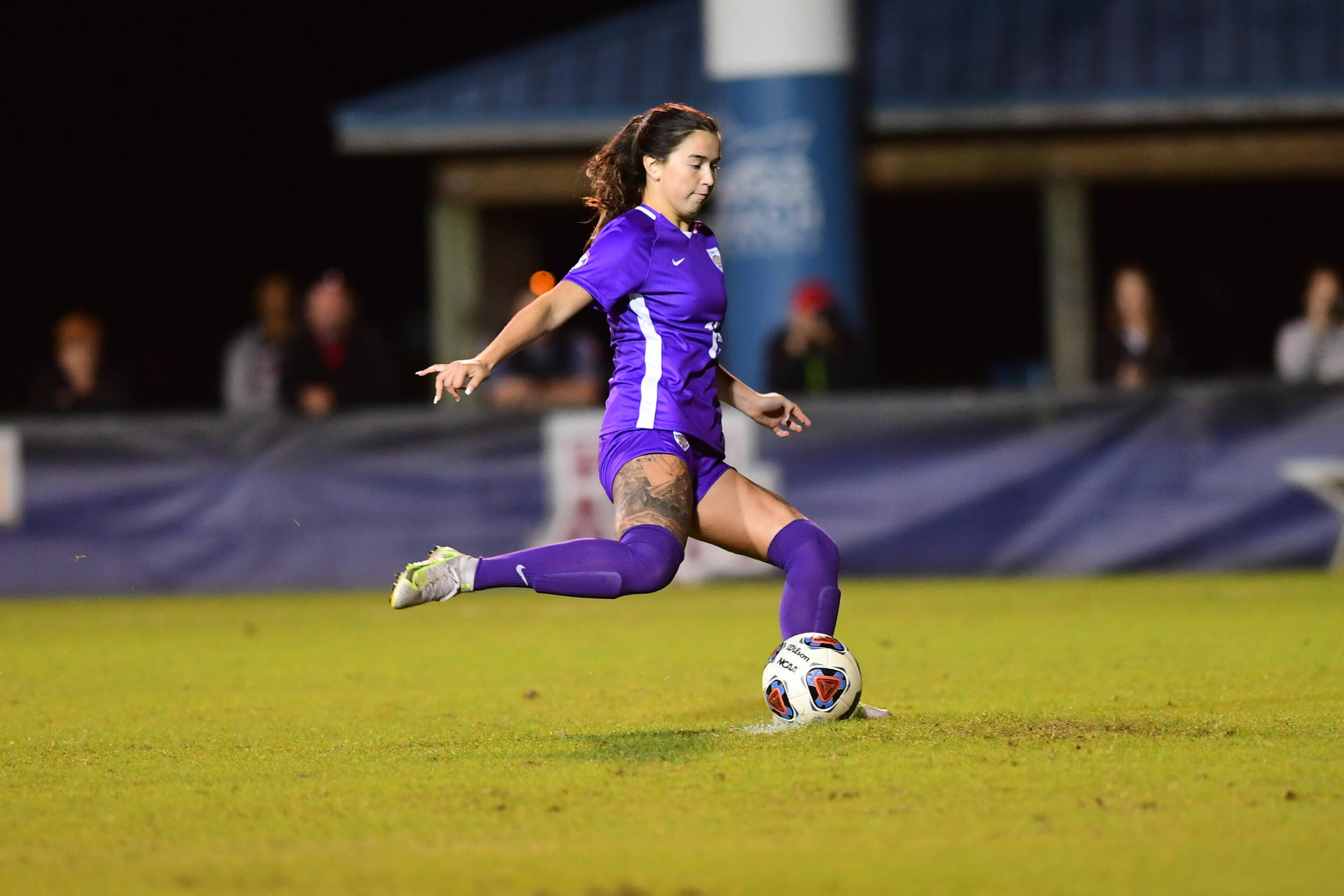 Orange Beach, Ala. – Midfielder Jordan Johnson stepped up to the spot to convert the winning penalty to give the No. 9-seed LSU Soccer team a 5-4 shootout win over the No. 8 Georgia Bulldogs on Sunday night at the Orange Beach Sportsplex. With the win, LSU advances to the SEC Tournament Quarterfinals.

“Just really proud of the team’s effort tonight; we used a lot of players off the bench tonight,” head coach Sian Hudson said. “We created some really good opportunities there in the first half and weathered the storm there a bit in the second half.

“Just to go into PKs and come out victorious shows what this team is about. Our effort across the board tonight was very high. This is what tournament soccer is about – survive and advance.

The Tigers opened the match with attacking intensity as they tested Bulldog goalkeeper Emory Wegener just 24 seconds in. Midfielder Wasila-Diwura Soale found space in the box and ripped a shot from 12 yards out that was denied by a diving Wegener. LSU nearly found a goal in forward Riley Dixon in the 13th minute as she connected with a header from six yards out that hit the frame of the woodwork. The ball bounced off the crossbar and back in the box, where Dixon attempted a follow up header that went above the frame of goal.

LSU goalkeeper Mollee Swift got her first action of the match in the 15th minute as she swiped away a ball from the left flank that was goal bound unless otherwise. Swift picked up two more saves in the 21st and 40th minutes to bring her save total to three heading into halftime.

The Tigers had two more chances before the break. Midfielder Athena Kuehn attempted to redirect a ball headed down in the box in the 36th minute, but her effort was saved by Wegener. Kuehn also had the other chance in the 44th minute as she dribbled into the box and hit a shot from 16 yards out that could not stay down and went above the goal.

The second half was a gritty contest that saw neither team create many quality chances. Swift picked up her fourth save of the match just 48 seconds into the half as she caught a volleyed effort from the top of the box.

The biggest moments of the half came in the 70th and 74th minute. In the 70th minute, Madison Haugen cut outside to her left foot and ripped a shot on goal that was poked over by a stretching Swift. Four minutes later, Abby Boyan got on the end of an over-the-top through ball and one-on-one with Swift, but her shot was denied by the outstretched gloves of Swift.

Each team had one more chance on goal to end the second half. Swift picked up her fifth save of the night in the 80th minute as she stopped a tame long shot from a Georgia attacker while forward Molly Thompson sent an effort on goal in the 81st minute that was collected by Wegener.

The first overtime period did not have much happen until the final seconds as Swift picked up her sixth and biggest save of the night yet as she fully extended to deny a powerful effort from outside the box to keep the Tigers in the match. Swift picked up one more save in the second overtime period at the 109th minute to finish the match with nine crucial saves for the Tigers.

LSU had a few chances in the second overtime period but could not convert them. Forward Taylor Dobles played a clever through ball in the 104th minute to Alexander, who broke into the box but could not get a favorable angle on her shot and was denied by Wegener. Midfielder Chiara-Ritchie Williams had chances from outside the box in the 107th and 108th minute, but both only just missed the frame of goal.

The match could not be decided in 110 minutes, which meant a penalty shootout would decide the winner. Georgia’s Daniella Murguia converted first and was followed up by defender Shannon Cooke, who placed the ball in the bottom left corner to make it 1-1.

Mollie Belisle stepped up and beat Swift and was followed by LSU midfielder Meghan Johnson, whose shot was saved by Wegener to give the Bulldogs a 2-1 lead after the second round.

Abby Boyan opened the third round by narrowly beating Swift, who guessed the right way but could not stop the penalty. Midfielder Brenna McPartlan followed her and slotted her penalty into the top left corner to make it 3-2 in favor of Georgia after three.

The fourth round opened with a goalkeeper against goalkeeper contest as Wegener stepped up to face Swift. Wegener hit a powerful shot but could not keep it on frame as it ricocheted off the crossbar. Defender Tilly Wilkes responded to Wegener’s miss with a well-hit penalty that went into the bottom-right corner to tie the shootout at 3-3.

Danielle Lewin opened the fifth round by converting her penalty to put the Bulldogs back in the lead at 4-3. Swift stepped up as LSU’s fifth penalty taker and drilled the penalty to the roof of the net in a must make situation to tie it at 4-4 and push the shootout into sudden death.

Haugen placed the ball and sent her penalty to the right side of goal but was denied by a diving Swift to give LSU a chance at victory. Midfielder Jordan Johnson stepped up to the spot and drilled a ground shot to the left corner to narrowly beat Wegener and secure a 5-4 shootout win for the Tigers.

The No. 9-seed LSU Tigers will take on No. 1 Arkansas in the quarterfinals at 5 p.m. CT on Tuesday, November 2.