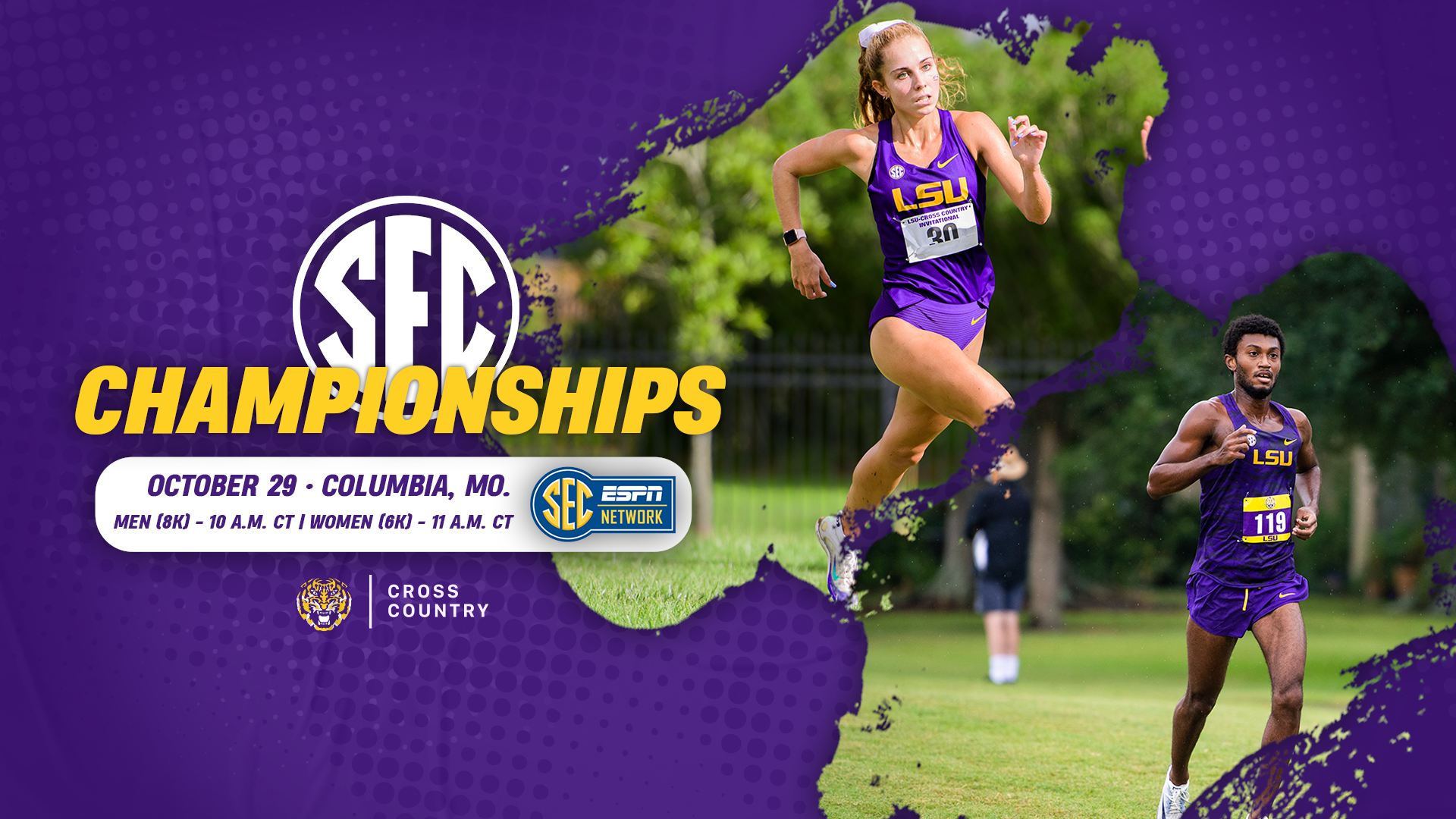 Baton Rouge, La. – The LSU women’s and men’s cross country teams will compete at the SEC Championships on Friday morning (October 29) in Columbia, Missouri. The meet will be hosted at the Gans Creek Cross Country Course. Both men’s and women’s races will air live on the SEC Network beginning at 10 a.m. CT on Friday morning.

The Races
Television coverage will begin at 10 a.m. CT on the SEC Network. The men’s 8k race will begin at approximately 10:08 a.m. CT. The women will follow that race with a start time of 11 a.m. CT for their 6k race. Both races will be shown in their full entirety on the SEC Network; Bill Spaulding will handle the play by play duties, and Larry Rawson will serve as the color analyst.

LSU at the SEC Championships
LSU’s best ever women’s team finish at the SEC meet was fourth back in 1999. A year ago, the Tigers finished fifth with a team score of 173 points at University Club here in Baton Rouge. Three of the five runners who scored in that race – Katy-Ann McDonald, Alicia Stamey, Ashley LaJocies – will be in action on Friday. McDonald finished 12th a year ago with a 6k time 20:33.8 in that race to earn All-SEC Second Team honors. The best individual finish by a women’s runner in program history at the SEC Championships was Silje Rasmussen, who finished fourth back in 1996. Only four runners in program history have claimed top-10 finishes at the conference meet and McDonald has a chance to add her name to that list this week.

The men’s best team finish is second place, twice. The first runner-up showing came back in 1938, and the most recent came in 1989. The men’s squad has finished eighth at the SEC meet in back-to-back years marking the highest finish for the Tigers at the league meet since 2007. The men’s squad has all five scorers back from 2020 that contributed to that eighth place finish a year ago in Baton Rouge. Davis Bove was LSU’s top finisher at the 2020 SEC meet by finishing 17th (24:32.6/8k), only three spots from earning a bid on the All-SEC Second Team which hasn’t been done by an LSU male runner since 2007 (Joseph Simuchimba).

The Lineup
LSU will travel to Missouri with an experienced group of runners. Seven of the nine male athletes on the trip have competed previously at an SEC meet and those runners are Davis Bove, Eric Coston, Jackson Martingayle, Cade Martin, Garrett Hamilton, Adam Wise, and Will Dart; Bove (17th), Coston (34th), Dart (43rd), Martingayle (52nd), and Martin (75th) scored for the men last year. Evan Pardo and Jack Wallace will be making their SEC debuts.

On the women’s side, six of the 10 athletes have SEC experience. All-SEC Second Team performer Katy-Ann McDonald will lead the way for the Tigers. Both Stamey (46th) and LaJocies (67th) turned in scoring performances a year ago at the league meet. Also on the trip for the Tigers will be Adele Broussard, Callie Hardy, Gwyneth Hughes, Sophie Martin, Doria Martingayle, Lorena Rangel and Alicia Stamey.

In The Rankings
The LSU men are ranked fourth in the USTFCCCA South Central rankings, and the women check in at the No. 7 spot. The Tigers will be competing against five national top 25 teams this week in Missouri. On the women’s side, ranked foes include No. 5 Alabama, No. 11 Ole Miss, and No. 15 Arkansas, and the men will be taking on No. 6 Arkansas and No. 22 Alabama.