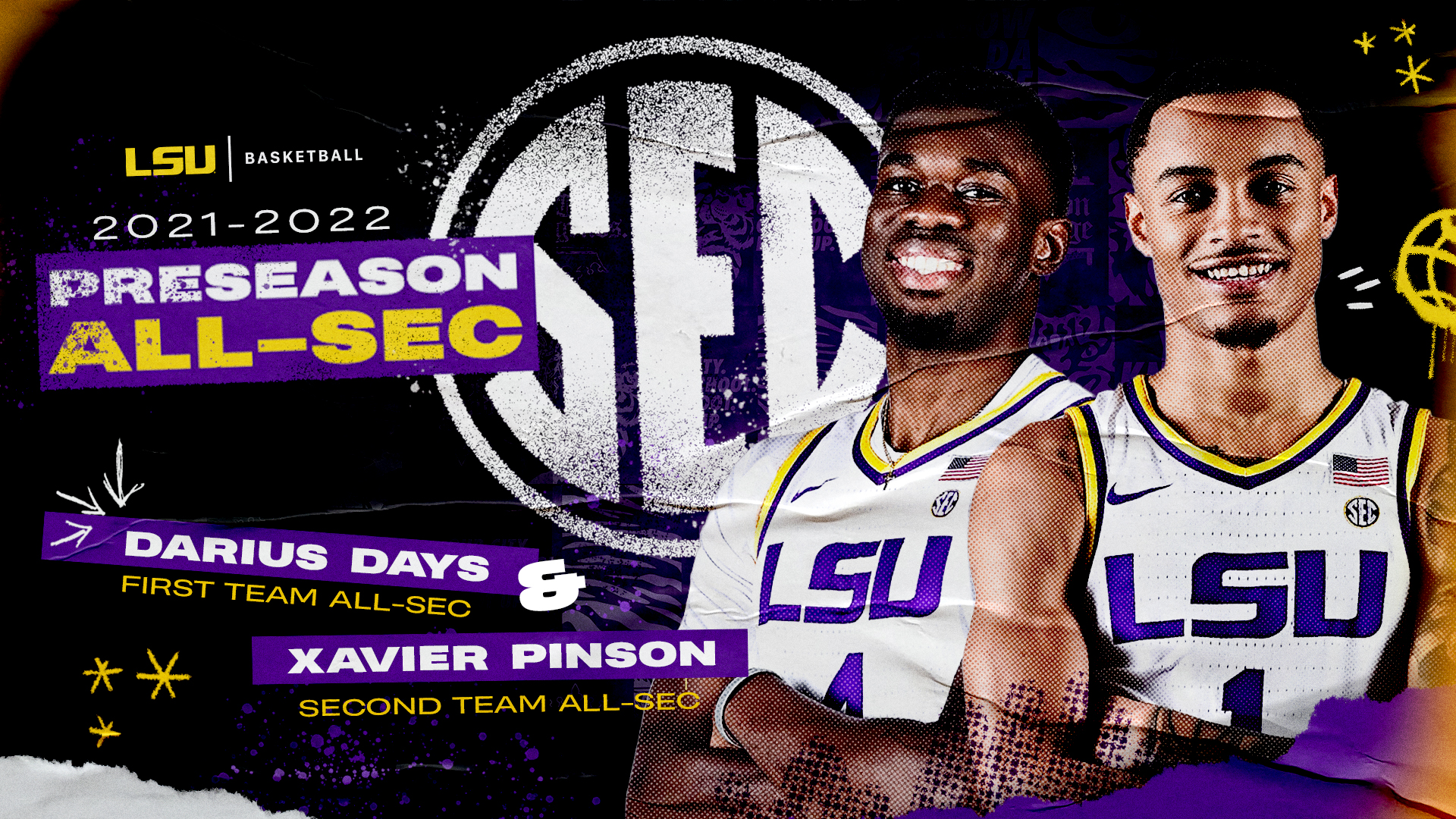 BATON ROUGE – LSU senior Darius Days and Xavier Pinson were named to the preseason All-SEC teams as selected by the 14 league coaches and announced by the Southeastern Conference office on Tuesday.

Days was named to the first team while Pinson was selected on the second team.

Alabama, Arkansas, Auburn, Kentucky, LSU and Mississippi State each have multiple selections. In all, 38 different players received votes for the coaches’ teams.

The coaches’ preseason All-SEC first and second teams consist of a minimum of eight players on each squad, voted on by the SEC basketball coaches. No ties were broken and no predicted order of finish was made.

Days who returned for his senior year after testing the NBA waters during the summer, played and started 28 games last season, averaging 11.6 points, 7.8 rebounds and just over one steals a game. The native of Raleigh, Florida was the heart and soul of the LSU team as LSU was 19-1 when he scored in double figures.

In 94 career games he has upped his points and rebounds average every season at LSU. In 2021 he shot over 50 percent, making 123-of-237 field goals (51.9%) with 52 three-pointers. He has 44 games in double figures over three seasons and his 16 double doubles for his career is the most for any active player in the SEC.

Pinson, who came to LSU after three seasons at Missouri, started 26 games for Mizzou during the 2020-21 season, averaging 13.6 points, 2.7 rebounds and 2.9 assists per game. He had 18 games scoring in double figures and scored a career high 36 points in a game against TCU, hitting 10-of-14 field goal attempts, including 8-of-13 from the arc.

Pinson last year had 23 twice against Arkansas, 27 at Tennessee and 22 versus Oregon. In three seasons at Missouri, he has scored 903 points for 88 games (10.3 average with 98 three-pointers made.

The LSU Tigers open the 2021-22 season on Tuesday, Nov. 9, at 7 p.m. against ULM. The game will be broadcast on the LSU Sports Radio Network and streamed on SEC Network+. Season tickets for the 2021-22 season are available at the LSU Athletics Ticket Office and online at LSUTix.net.