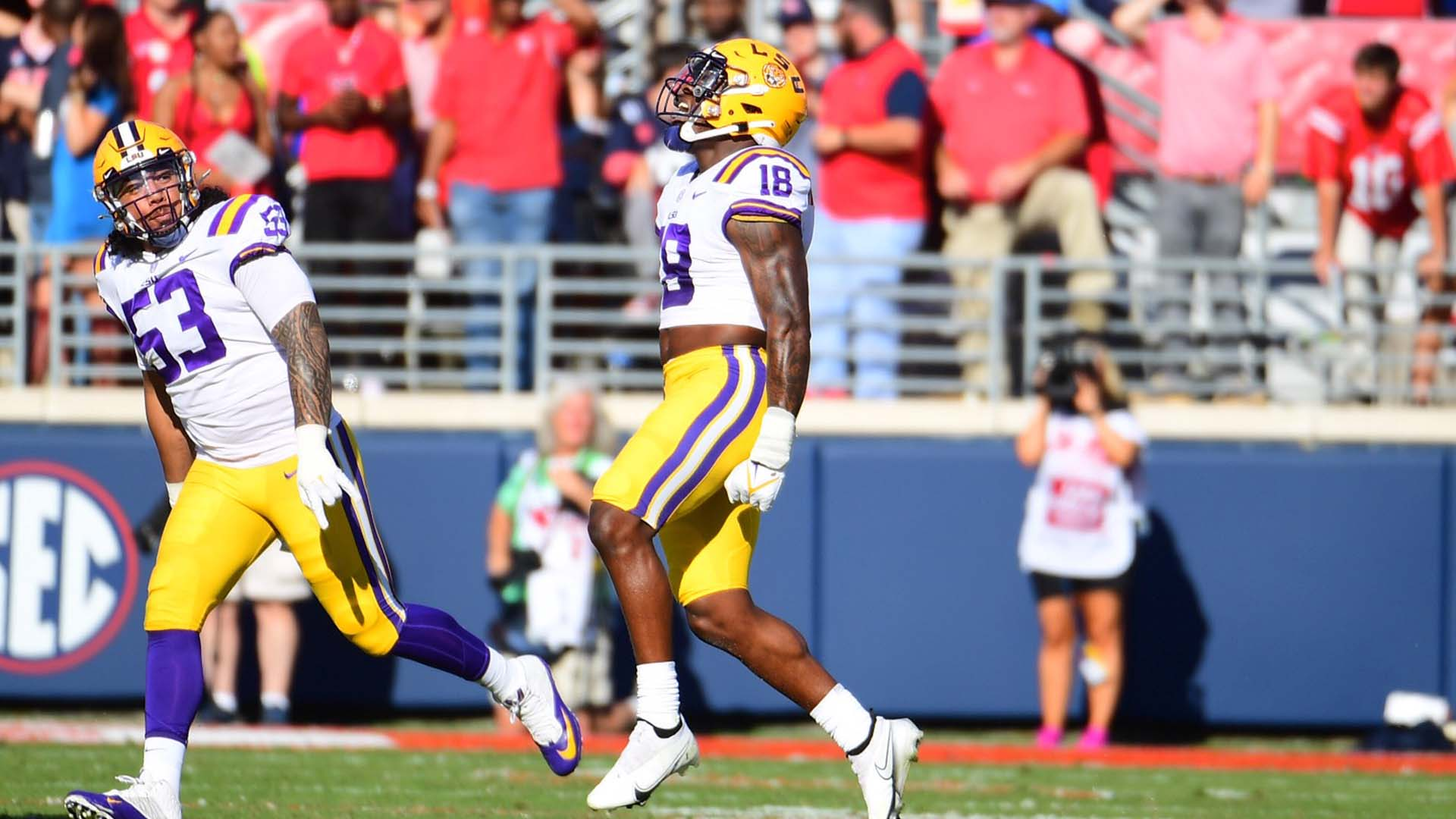 OXFORD, Miss. — A goal-line stand at the end of the first quarter flipped the momentum of the contest, as No. 12 Ole Miss defeated LSU, 31-17, on Saturday afternoon at Vaught-Hemingway Stadium.

After taking a 7-0 lead midway through the first quarter on a 90-yard drive, LSU (4-4, 2-3 SEC) looked to silence the home crowd with a second TD. However, the Tigers turned the ball over on downs with an interception at the Ole Miss 1.

Ole Miss (6-1, 3-1 SEC) scored 31 unanswered points to take control, as LSU lost two fumbles, recorded one first down, and missed a 55-yard field goal during the second and third quarters.

LSU linebacker Damone Clark had a career day, recording 20 tackles including a sack and a forced fumble that wiped an Ole Miss touchdown off the board in place of a touchback. His tackles total was one shy of the LSU record (21) set by Al Richardson against South Carolina in 1982, and was the most by a Tiger since Kevin Minter ‘s 20 at Florida in 2012.

LSU starting quarterback Max Johnson played three quarters, completing 13-of-21 passes with an interception and a pair of fumbles as a result of sacks.

Freshman Garrett Nussmeier entered in the fourth quarter and led the Tigers to a pair of scoring drives. He completed 7-of-12 passes for 103 yards with a touchdown pass to wide receiver Malik Nabers .

Rynning back Tyrion Davis-Price led LSU with 17 carries for 53 yards including a 1-yard touchdown run in the first quarter, while freshman running back Corey Kiner added 49 yards on 10 carries.

Rebels Quarterback Matt Corral completed 17-of-22 passes for 180 yard with a touchdown, while adding a rushing touchdown. Snoop Conner led Ole Miss with 117 yards on 14 carries, while Jerrion Ealy added 82 yards on nine attempts including a 36-yard touchdown run in the third quarter.

LSU has an open date on Oct. 30 and will return to action on Nov. 6 when traveling to Tuscaloosa to face Alabama. Kickoff time is expected to be announced on Monday.

Ole Miss won the coin toss and elected to receive the opening kickoff, with LSU defending the south end zone in the first quarter.

Following an Avery Atkins touchback, the Rebels overcame an illegal block penalty with a 15-yard reception by Drummond to the Ole Miss 37. A 2-yard sack by LSU defensive tackle Glen Logan spoiled the next set of downs, and Ole Miss punted to the LSU 10 where Trey Palmer caught the ball at the boundary.

A 14-yard receptions by Bech on third-and-3 moved the Tigers from the shadow of its end zone. Two plays later, Johnson came under pressure and heaved a 44-yard pass to Palmer who came down with the ball between two defenders at the Rebels 21. The long reception allowed LSU to complete a nine-play, 90-yard drive with a 1-yard TD run by Davis-Price.

A false start put the Rebels behind the chains on the ensuing drive and LSU defensive tackle Neil Farrell Jr. made a tackle behind the line of scrimmage on third-and-4 to force a punt.

From its 27, LSU took advantage of a pass interference penalty on a pass to Jenkins at midfield to earn a first down. A 10-yard run by Kiner again moved the chains before Johnson connected with Jenkins for 13 yards to the Ole Miss 20. On fourth-and-1 at the Ole Miss 11, Johnson drew the Rebels offsides. However, LSU was unable to punch it in with four plays inside the 6, including a fourth-down pass by Johnson which was intercepted by Ole Miss’ Tysheem Johnson at the 1.

Ole Miss used three-straight runs by Snoop Conner for 13, 9 and 23 yards to the Ole Miss 46 as the quarter came to an end.

LSU was flagged for pass interference on a deep pass to the 11, giving Ole Miss a first down at the LSU 40. Later in the drive, consecutive sacks by Farrell and Clark pushed the Rebels to the 27 where Caden Costa made a 43-yard field goal.

The Tigers benefited from an Ole Miss pass interference penalty and crossed into Rebel territory with four-straight runs to the 39. A pair of incomplete passes led to a 55-yard field goal attempt by York who missed for the first time this season.

Ole Miss took advantage of the short field, as Corral capped a seven-play, 63-yard drive with a 2-yard touchdown pass to Casey Kelly. Ole Miss led 10-7 with 3:12 left in the half.

LSU quickly went three-and-out and Ole Miss used two timeouts to give itself 2:20 to extend its lead.

LSU failed to gain a first down on its opening drive of the half, punting 55 yards to Drummond who returned 11 yards to the Ole Miss 34.

Corral immediately went to the air, connecting with Henry Parrish Jr. for 34 yards to the LSU 32. On third-and-12, Conner ran a draw for 13 yards to keep the drive alive. After a third-and-5 stop by LSU safety Jay Ward , Ole Miss converted the fourth-and-3 with a 4-yard run to the left by Corral to the LSU 10. On second-and-goal Parrish scored from the 5 to push Ole Miss’ lead to 24-7 with 8:59 to play in the third quarter.

After a 19-yard pass from Johnson to Jenkins, the LSU quarterback was sacked and stripped of the ball by Cedrick Johnson. Ole Miss recovered at the LSU 43, and started its next drive at its 42 following a dead ball personal foul.

The teams exchanged punts before Ole Miss converted a third-and-12 with a 36-yard TD run by Ealy with 2:27 remaining in the quarter. Ole Miss led 31-7.

A pair of penalties stalled an Ole Miss drive at the LSU 40, where the Rebels’ punted into the end zone.

Backup quarterback Nussmeier helped drive to the Ole Miss 13 before a 16-yard sack spoiled the opportunity for a touchdown. York entered for a 47-yard field goal which was true.

An onside kick by Preston Stafford was unsuccessful, and Ole Miss started from the LSU 45. With Corral remaining in the contest, Ole Miss responded with a 13-yard touchdown run by Conner.

Ole Miss looked to have added to its tally on a run by Conner to the goal-line. After video review, it was ruled that the ball was knocked away from Conner at the 1 and fumbled through the end zone for a touchback.

LSU took over at its 20 and put together a six-play scoring drive. A 33-yard pass from Nussmeier to Thomas keyed the scoring drive, setting up a 9-yard touchdown pass to Nabers.

Another onside kick from Stafford was recovered by Ole Miss, which was able to run out the clock with a fourth down conversion.