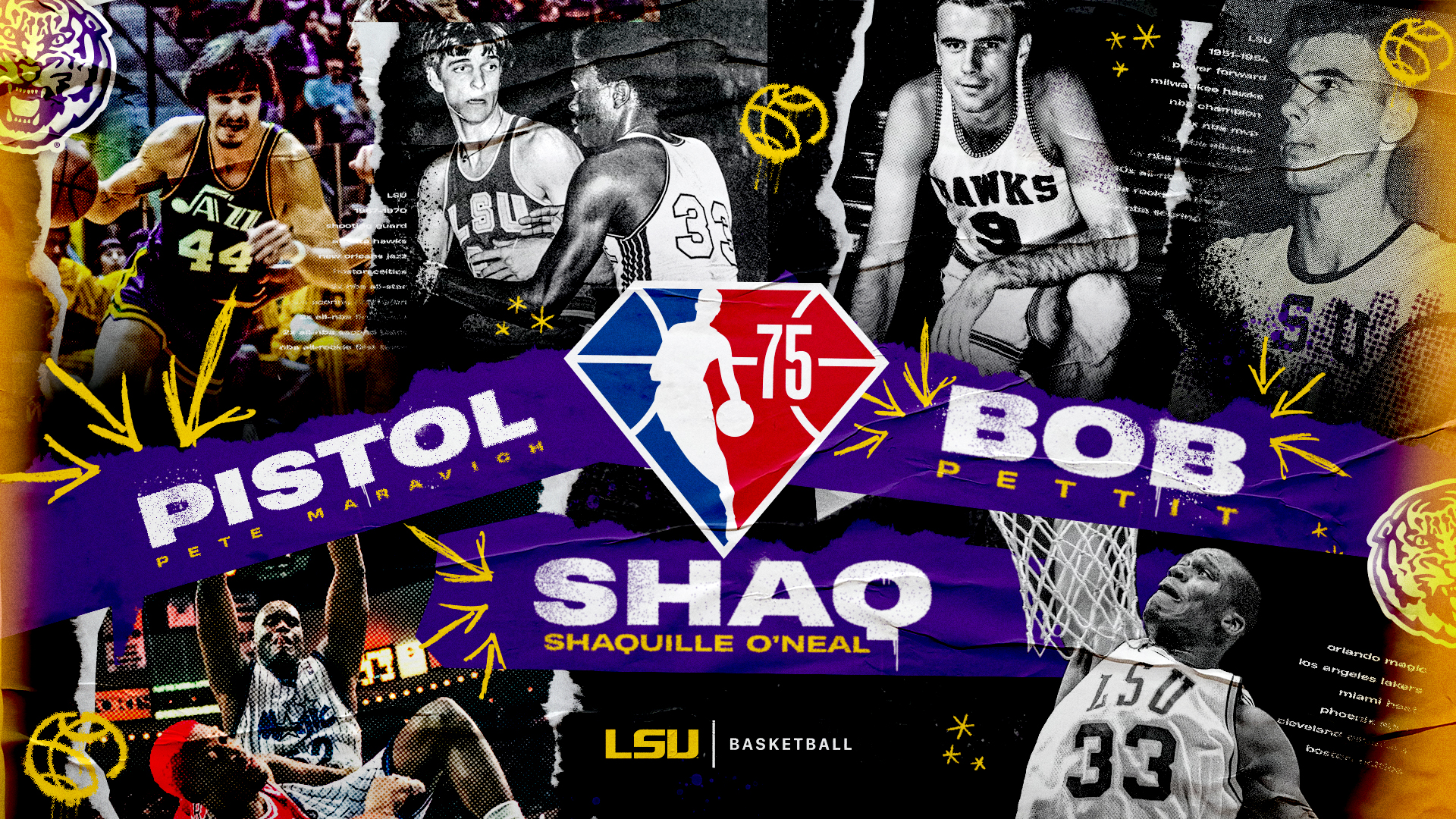 BATON ROUGE – Three LSU basketball icons, who were on the NBA at 50 team 25 years ago have continued to stand the test of time and were announced this week on the National Basketball Association’s 75th anniversary team

Pettit was known as one of the NBA’s first truly great scorers, playing 11 season and amassing 20,000 points – the first play in NBA history to reach that mark. His career spanned the second half of the 1950s and through the early 1960s, earning All-Star honors event season. He was the No. 2 overall pick of the 1954 draft and averaged 20.4 points and 13.8 rebounds as a rookie to claim Rookie of the Year honors.

His St. Louis Hawks downs the Boston Celtics in Game 6 to win the NBA title.

Maravich was a 4-time All-NBA selection and a 5-time NBA All-Star after a record setting NCAA career at LSU. He was ahead of his time in many ways as a flashy scorer with incredible handle and unprecedented range, well before all three because fashionable elements of the NBA game.

His 10-year NBA career featured a flurry of all-angles basket-making that saw him average 24.2 points per game and mind-bending passes to the tune of a 5.4 assists per game average.

At LSU, he posted one of the greatest careers in NCAA history, leading the nation in scoring averages of 43.8, 44.2 and 44.5 points in his three seasons at the varsity level. He was named college Player of the Year in his senior season after scoring 50 or more points in 10 of LSU’s 31 games and setting NCAA records for most points (1,381) and highest scoring average in a single season.

O’Neal, who is still a fixture in the league as one of the hosts of TNT’s basketball coverage, was an NBA MVP, a 3-time NBA Finals MVP, a 14-time All-NBA selection and a 15-time NBA All-Star while winning three titles with the Lakers and one with the Miami Heat.

He played 19 years in the NBA and is regarded as one of the most dominant players in NBA history. He was the No. 1 pick of the Orlando Magic in the 1992 NBA Draft. O’Neal won two scoring titles and finished with a total of 28,596 career points, the eighth most in league history. He ranks sixth all-time in field goals, 15th in rebounds and eighth in blocks. Both the Lakers and Heat retired O’Neal’s jersey.