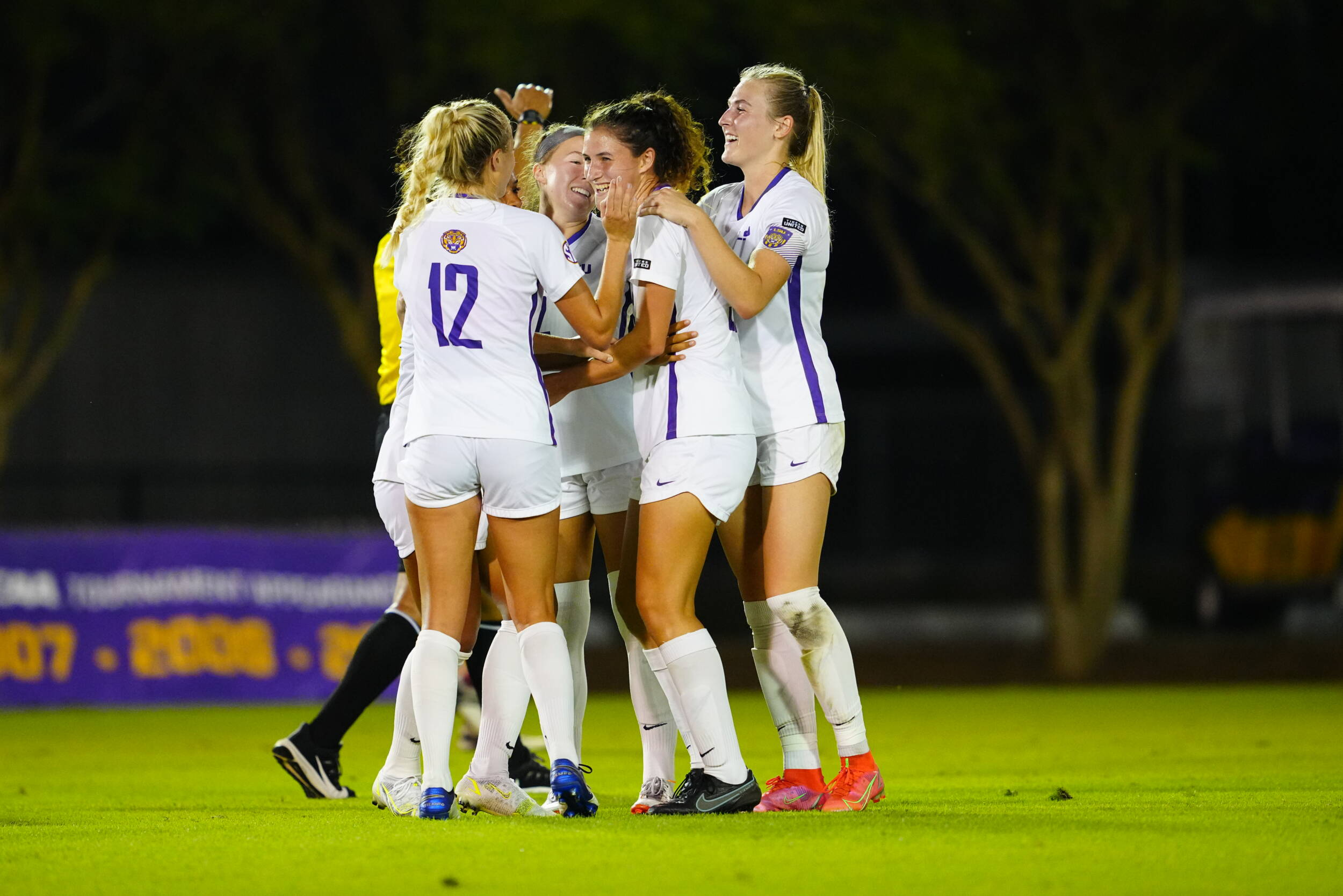 Baton Rouge, La. – The LSU Soccer team (10-5-0, 3-5-0 SEC) took care of business and defeated the South Carolina Gamecocks (9-5-1, 4-3-1 SEC) by a score of 4-0 on Thursday night at the LSU Soccer Stadium. Defender Shannon Cooke gave LSU a 1-0 lead from the penalty spot in the 18th minute before forward Riley Dixon doubled the lead in the 29th minute following a great spell of team play. Midfielder Meghan Johnson grabbed the third goal in the 38th minute with a powerful effort from 30 yards out, while forward Alesia Garcia rounded the night off with a goal of her own in the 82nd minute.

“We talked about being compact and organized defensively tonight,” head coach Sian Hudson said. “After the first 10 minutes or so, our confidence kept growing and growing. It was a must win game for us tonight and to come out and score four goals, keep the ball well, and get a clean sheet is fantastic. Really proud of the team tonight; now we turn our focus to Florida on Sunday.”

The two teams opened the game with a midfield battle for the opening fifteen minutes of the match, with neither side able to get quality looks on goal. Forward Tinaya Alexander latched on to a through ball in the box in the 18th minute before the South Carolina goalkeeper brought her down and forced the referee to call for a penalty shot. Cooke stepped up to the spot and placed the shot into the right corner and gave the Tigers a 1-0 lead on the night and collected her first goal of the season in the process.

Goalkeeper Mollee Swift registered her first save of the night in the 24th minute as she caught a shot on goal from a Gamecock attacker. Swift picked up two more saves in the 30th and 31st minutes to take her save total to three before halftime.

The second goal of the night came in the 29th minute. Dixon linked with Alexander in midfield, who broke away down the left-hand side and into the box, where she laid the ball off to an open Dixon, who slotted the ball from six yards out into the back of the net. The goal is Dixon’s second on the year, and ninth in her collegiate career. For Alexander, the assist is her fourth of the year and 20th in her career, tying her for third on the all-time LSU assist list.

29' | Link Em Up@rileydixonn finishes off a fantastic display of soccer from the Tigers for her second goal of the season! @tinayaalexande3 gets the assist, her fourth of the season.

In the 38th minute, Garcia pressed a Gamecock defender and won the ball at the top of the final third before she laid the ball off to Johnson. Johnson took a touch and hit a rocket that finessed into the top-right corner to give the Tigers a 3-0 lead heading into the break. The goal is Johnson’s second of the season, and Garcia’s team-high tying fourth assist on the year.

The Gamecocks opened the second half with their fourth shot on goal of the night in the 47th minute as Luciana Zullo headed the ball from eight yards out but was denied by Swift as she dove to her right side and collected the ball. South Carolina had another look on goal as Zullo got by Swift in the 50th minute and shot at the open goal, but was denied by defender Reese Moffatt, who cleared the ball on the goal line.

52' | @ReeseMoffatt07 with the great hustle to keep the clean sheet intact.

The Tigers maintained control of the game the rest of the second half, limiting the Gamecock’s chances in terms of quantity and quality. On the offensive front, LSU had two shots on target in the 53rd and 58th minute that required a save from South Carolina goalkeeper Heather Hinz.

The fourth and final goal of the night came in the 82nd minute as Garcia got on the end of a through ball from midfielder Jordan Johnson. Garcia beat her defender and sent a powerful shot on goal that Hinz got a hand on but was not able to stop from going into the back of the net. Garcia’s goal is her sixth of the season and takes her point total up to 16. Johnson’s assist is the first of her collegiate career and increases her point total to three for the season.

Swift finished the match with four saves and picked up LSU’s seventh clean sheet on the year; her fifth solo shutout of the campaign.

Statistically, the two teams were even. Both teams had 13 shots on the night, with LSU having six on goal compared to South Carolina’s five. The Tigers narrowly won the possession battle by a margin of 51% to the Gamecocks’ 49%. The difference came in quality, as LSU created more threatening chances and limited South Carolina’s attacking presence throughout the match.

LSU’s four goals on the night is the highest in SEC play since the 2015 season when the Tigers defeated Georgia by a score of 4-3. With Cooke’s goal, the number of Tiger goal scorers now sits at 14, which ties the school record from 2003 for most individual goal getters in a season.

The four goals scored by the Tigers were the most that South Carolina has allowed since 2014 when they gave up five to Florida State. The Gamecocks had not allowed an SEC opponent to score four goals in a match since 2012 prior to tonight. With the win, LSU has now won three straight over South Carolina.

The win lifts the Tigers to ninth place in the SEC standings with 9 points. With two games left in the regular season, the Tigers will look to keep their spot in the top 10 to earn a berth in the 2021 SEC Tournament.

LSU travel to Gainesville, Florida, to take on the Florida Gators at 11 a.m. CT on Sunday, October 24.