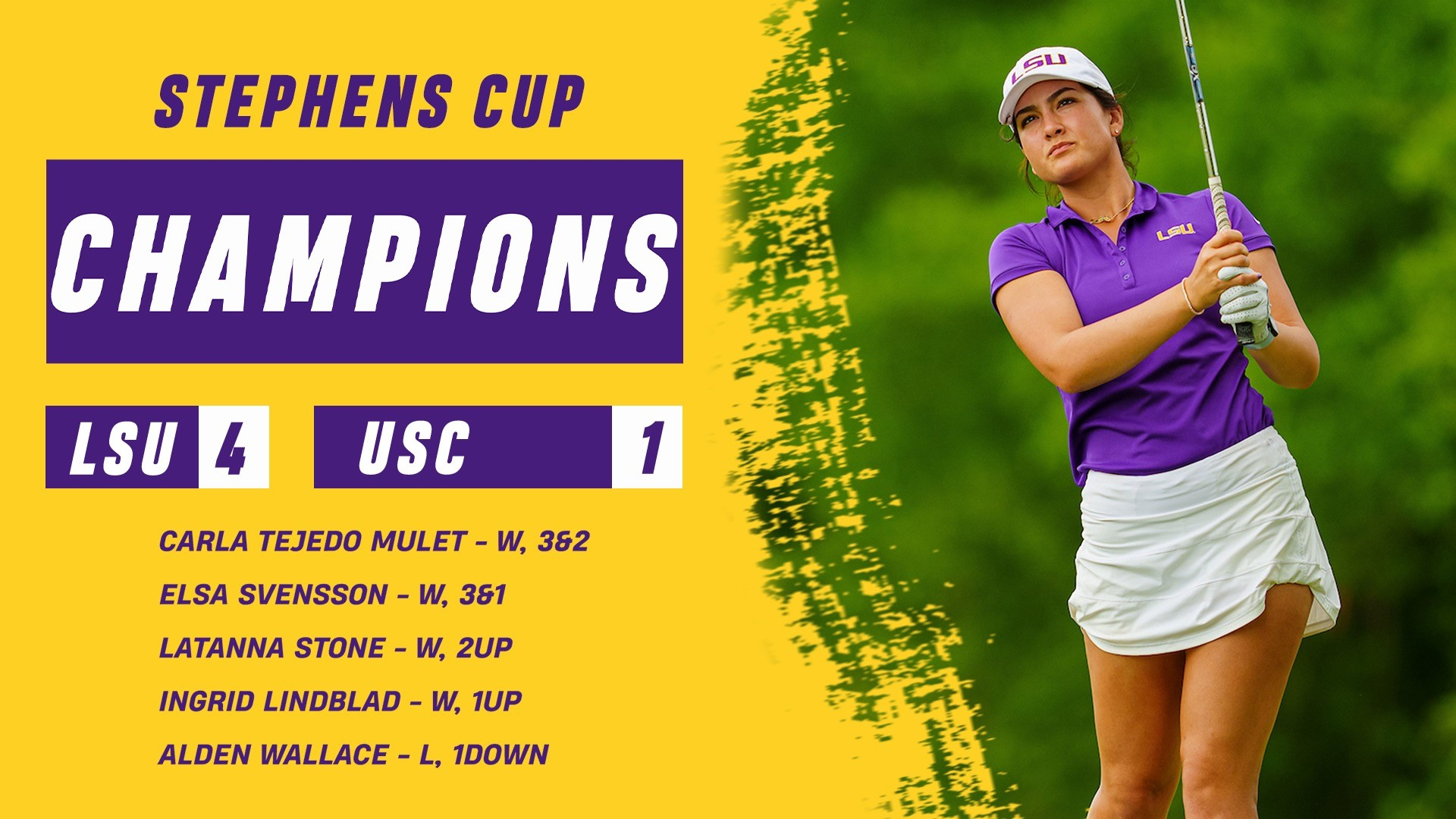 ROLAND, Arkansas – The LSU women’s golf team’s visit to the Alotian Club ended in spectacular fashion Wednesday as the Tigers scored a convincing 4-1 victory over South Carolina in the championship match of the inaugural Jackson T. Stephens Cup.

It was the 46th team victory for the LSU women’s golf team in program history and completed a sweep of the event as junior Ingrid Lindblad scored her fifth career win on Tuesday in the individual competition.

As it turns out under present college rules, Carla Tejedo Mulet, who tied with Lindblad for the individual title despite losing in the playoff, will also get credit for her first collegiate title at the Stephens Cup.

Coach Garrett Runion put Tejedo Mulet out first on Wednesday and she delivered a strong start, jumping out to a 5Up advantage after seven holes on Tai Anudit. The lead dropped to 2Up twice in the match but Tejedo Mulet closed it out with a birdie on the 16th hole to win 3&2 and give LSU its first point.

“I didn’t know that was a win for me,” Tejedo Mulet told The Golf Channel’s Billy Ray Brown in the post-match interview when he informed her of the rules on college wins. “I’m very happy to have it. About the match play, it was pretty tough. I was really happy with how I handled it. I’m really proud of the team.”

Freshman Elsa Svensson in match two was tied with Justine Fournand of Carolina after eight holes, but Svensson never trailed in the match, winning the ninth and 11th holes to go 2Up and her win on 17 made the final margin 3&1 to give LSU a 2-0 advantage.

With three matches on the course for much of the afternoon, South Carolina had the lead in two matches with it appearing that the match between World Amateur No. 3 Lindblad and No. 10 Hannah Darling of South Carolina would be the decider.

But in the third match Latanna Stone, after never leading through 15 holes, was able to tie the match with a par on 16 and take the lead with a birdie on the par 5 17th hole. Stone hit two great shots on 18 to have a look for birdie and her putt was conceded when Louise Rydqvist could not get up and down for par. The 2Up decision gave LSU its clinching third point.

“I think (having match play) is great,” said Coach Runion in his post-match interview. “The last time was in the SEC Championship when it went to match play so we got a little bit of practice there. Unfortunately, in the NCAAs we missed match play by one shot. They (the players) weren’t too happy about that. They were motivated over the summer and this was great practice for the SEC Championship and hopefully the national championship.”

“I actually had no idea it would come down to my point,” said Stone afterwards about the clinching point. “But the last three holes was a big stretch. Garrett stayed with me and was keeping me motivated. I was getting frustrated throughout the day, but I hung on. I’m just so happy for our team.”

The other two matches were ended where they were on the course with Lindblad getting a 1UP decision over Darling. The players had a great match with excellent shot making on both sides but after tying the first three holes, Lindblad won the fourth hole and never gave up the lead getting as much as a 3UP lead before Darling rallied for two straight hole wins on the back nine.

But Lindblad made key approach shots and putts and never led Darling get the match back to all square giving the Tigers a fourth point.

Mathilde Claisse got South Carolina’s lone point with a 1UP decision over Alden Wallace. The LSU senior was never down more than two holes and closed it to one down with a birdie on the 13th hole.

This is Coach Runion’s fifth team championship in his fourth season as the LSU women’s golf coach.

The Tigers will have another Monday through Wednesday event next week to conclude the fall season, playing in West Point, Mississippi at Ole Waverly Golf Club in The Ally.