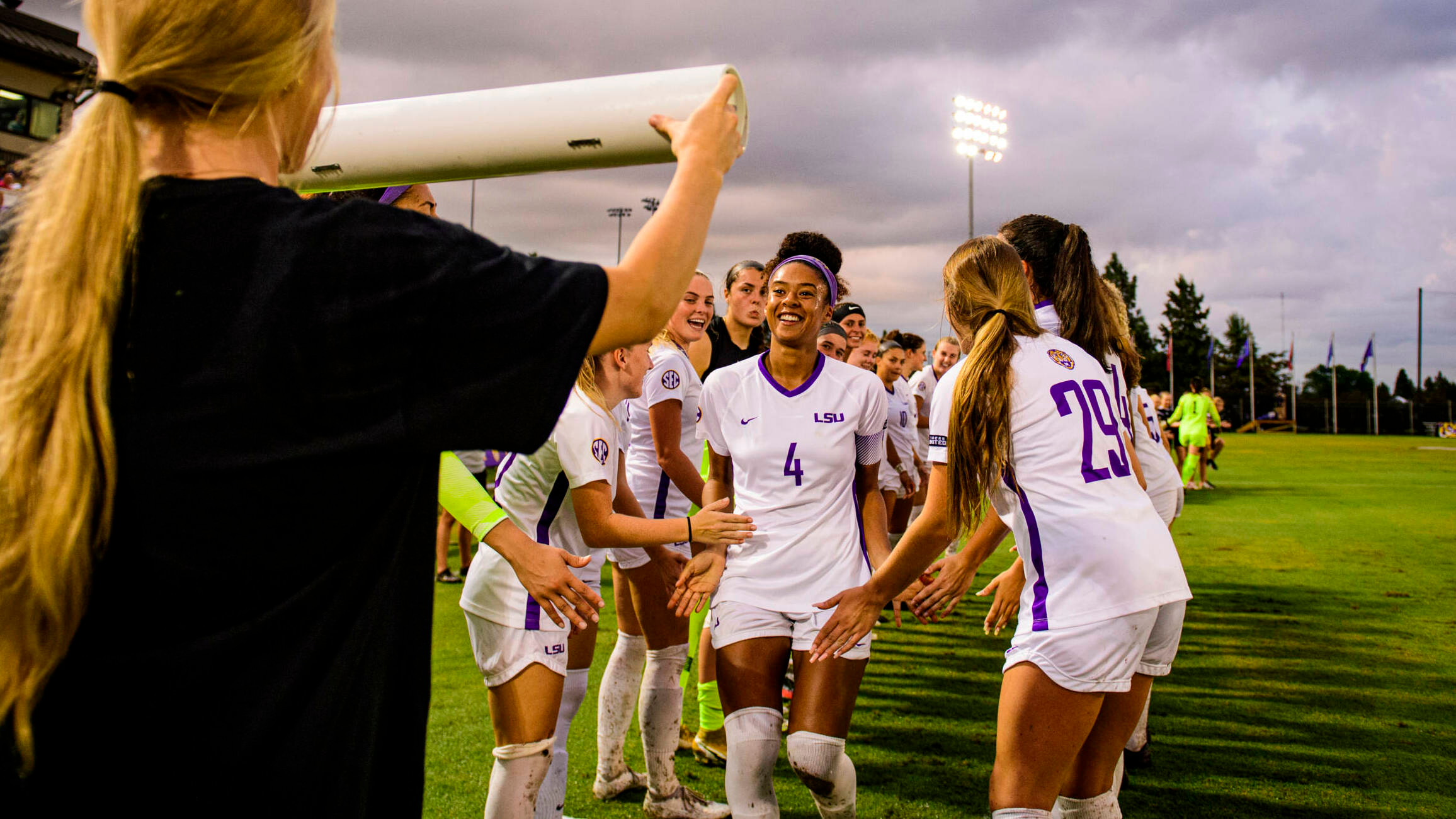 Chiara Ritchie-Williams is on the cusp of becoming the all-time leader in games played and games started at LSU as the Tigers enter a pivotal three game stretch on the backend of the conference schedule as they host South Carolina Thursday night at LSU Soccer Stadium.

She’s provided the program a steady presence on and off the field since she arrived in August of 2017. What a ride it’s been, but she’s nowhere near ready for it to come to an end. What’s in front of the Tigers? Handle business and earn a bid to the SEC Tournament in Orange Beach where anything can happen.

“I still believe in us and this team believes in ourselves,” Ritchie-Williams noted as the Tigers get prepped for South Carolina. “We know what is in front of us. We know what we are capable of. So we just have to go out there and play the way we know how to and the rest will take care of itself.”

It’s a must to rewind all the way back to a friendly between Arsenal, where Chiara played in the youth program, and a Florida ODP team in England. It was June of 2017 and she had no plans set in stone to play collegiate soccer at an American university even though it was always a dream of hers.

“When I was 16 or 17 I knew that I didn’t want to study in England,” she mentioned. “The opportunity to play at a high level and get an education isn’t available over there. You had to choose between the two and so that’s what motivated me to come to America.”

Following that friendly and a chat with then LSU head coach Brian Lee, Ritchie-Williams signed her papers and was en route to Baton Rouge less than a month later for training camp in August of 2017. It’s been four and a half years since she made that decision, and she’s appreciative of the journey she’s been on.

“I just knew that LSU was a big school and had all the best facilities,” Ritchie-Williams remembers. “I knew I was going to be provided with all of the resources I needed to succeed in soccer and with my studies. It’s been such a time of growth for me as a person and I wouldn’t trade it for anything.”

Her talent was felt immediately during the fall season of 2017 as she stepped in, started all 18 matches, and played the entirety of the match 17 out of 18 games that year as a true freshman. Her play was good enough to be recognized by SEC coaches around the league as she was named to the All-SEC Second Team.

“Things happened all so quickly once that summer,” Ritchie-Williams. “I knew coming in that I would have to adapt quickly. I had to learn how to use the strength I had in a different style. The play was a bit different, it was a challenge, but it ultimately made me develop at a quicker rate.”

A native of London, England, Ritchie-Williams has played an integral role in several parts of history outside of her individual recognitions. She was a key cog in LSU’s run to the SEC Tournament title back in 2018 as she played every minute of every game during that wild run in Orange Beach, and she helped LSU earn its highest ever ranking in program history earlier this fall as the Tigers ascended to the No. 5 spot in the national rankings in the midst of school record 11 match win streak.

“It’s a surreal feeling to see all the things we’ve accomplished since I’ve arrived,” Ritchie-Williams said. “I’ve never been one that has to be in the limelight but these recent accolades do mean the world to me because I’ve put in a lot of hard work.

“It means I’m a part of LSU history. I’m so lucky that I’ve been able to play and contribute as much as I have to the program. But I’ve done it in large part because of the people that I’ve been surrounded with.”

One of three LSU team captains this year, Ritchie-Williams loves the idea of leading people in the right direction. She knows she’s looked up to and sets the tone for this team.

“I love making big decisions,” Ritchie-Williams mentioned. “Trying to organize things and such. My ability to motivate and connect everyone around me is one of my strongest characteristics I would say.”

A primary defender during her first three years on campus, she was willing to make a move to the midfield over the final two years of her LSU career for the betterment of her progression under head coach Sian Hudson.

“Sian came in and gave us a bit of fresh air,” Ritchie-Williams remembered. “From the first meeting she had with us, she was clear with what her expectations were here. It gave me a bit of hope which we had been lacking for a time without a permanent coaching staff.”

A position change in any sport can create tension and nerves, but for Ritchie-Williams it allowed her to learn from her mistakes.

“My calmness and composure on the ball in the midfield is really important, and I’ve steadily gotten more comfortable with it,” Ritchie-Williams said. “Another area I’ve improved in tons is learning to fail. Knowing that it’s [failure] an opportunity for growth is key. I’ve learned to take more risks and be confident in my abilities.”

A soon to be four time member of the SEC Academic honor roll, Ritchie-Williams will graduate in December of 2021 with a degree in economics. Dream job in her dream city? San Diego and New York City are at the top of that list. But before she gets there, she wants to extend her playing career, collegiately, and hopefully professionally for as long as she can.