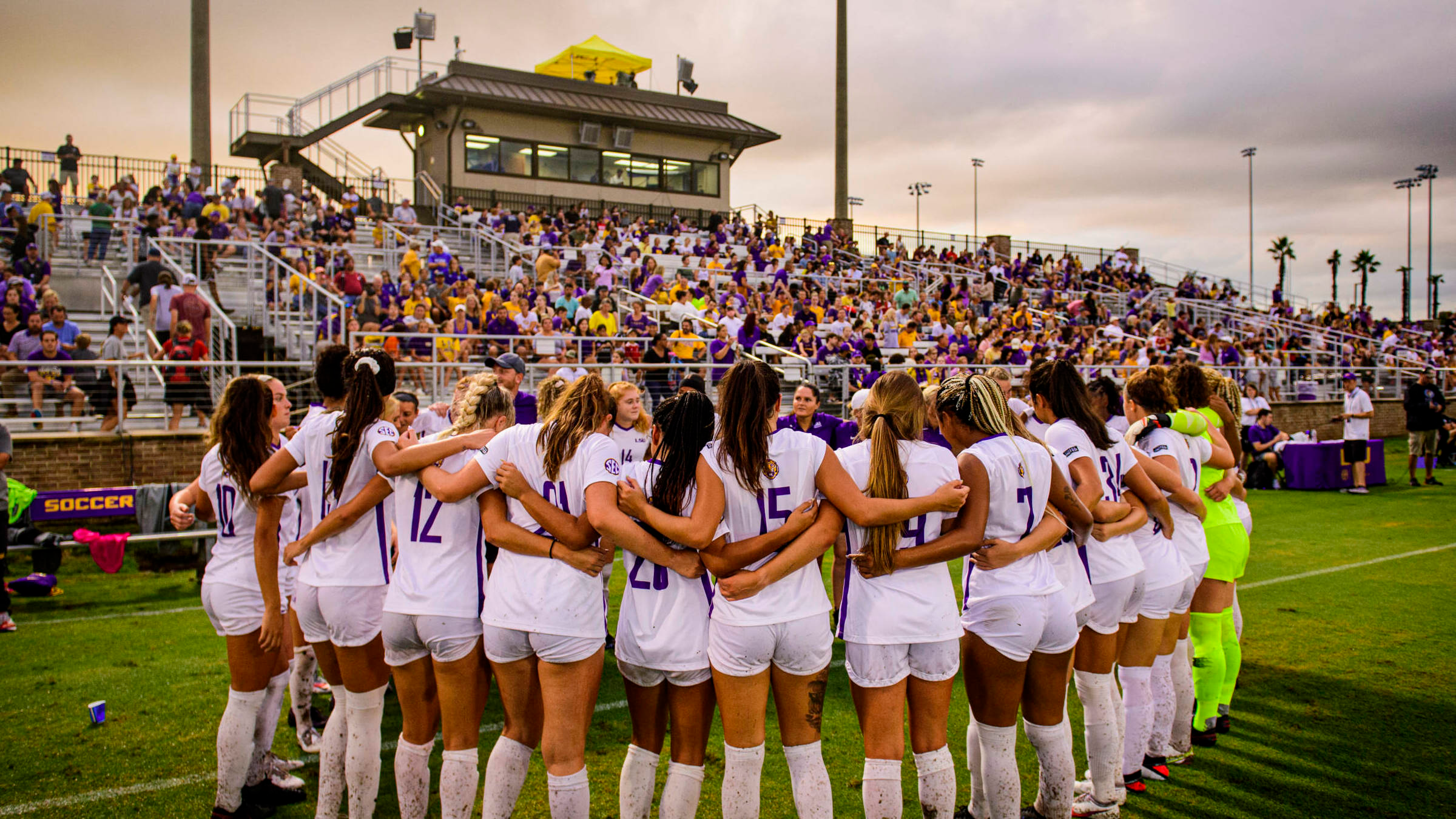 It’s a largely important game for the Tigers who are attempting to battle their way into the top 10 of the SEC standings for a bid to the conference tournament. LSU enters the match with a record of 9-5-0 overall and 2-5-0 in the SEC. South Carolina comes to town with a mark of 9-4-1 (4-2-1 SEC) on the season.

Fan Information
Thursday night will be Pups at the Pitch. Bring your dog to the game dressed in its best attire for a chance to win a prize and be recognized on the field at halftime. One dollar hot dogs and a wide variety of other concession stand items will be available for purchase. Gates open at 5 p.m.

Series History
LSU and South Carolina will meet for the first time in nearly three years on Thursday night. LSU has won the last two games over the Gamecocks; a 1-0 win in the 2018 SEC Tournament semifinals and a thrilling come from behind 2-1 win in Baton Rouge in October of 2018.

The series dates back to 1995 when LSU picked up a 1-0 win over South Carolina to get the series started. Since then, South Carolina has won 11 of the next 20 matches while six draws have occurred.

In The Record Book
If you want to witness some history on Thursday night you best be at LSU Soccer Stadium. Chiara Ritchie-Williams, who already is the school record holder for minutes played, will set LSU records in both games started and games played assuming she starts Thursday night against South Carolina. Thursday night will represent her 89th career start and 92nd match played.

The All-SEC performer has been LSU’s backbone dating back to the 2017 season when she arrived in Baton Rouge. Ritchie-Williams will pass up Malorie Rutledge (2006-09) in games started, and will climb above Melissa Clarke (2005-09) in total games played.

Mollee Swift keeps climbing the charts in a number of areas as well. Her 132 saves in an LSU uniform rank as the seventh most in LSU history, but she has a ways to go before she catches up to Roby DesOrmeaux who is in the sixth slot with 183 saves. Swift’s 16 wins in net rank as seventh most in school history, and her career GAA of 0.98 in a Tiger uniform ranks as the second lowest average over a career currently behind Mo Isom’s school record GAA of 0.86. Swift also picked up the eighth solo shutout of her career in LSU’s last win to move into sole possession of the seventh slot of that category as well.

Tinaya Alexander owns the fourth most assists in school history with 19; she had seven her freshman season, six during her sophomore campaign, three last year, and three this year. She’s also just a mere four points away from the LSU top-10 list in points scored in a career with 57 total thanks to 19 goals and 19 assists.

Goalkeeper Goals
LSU goalkeeper Mollee Swift scored the game winner for LSU in the 1-0 win over Kentucky on October 14. Tinaya Alexander drew the penalty inside Kentucky’s 18, and Swift stepped up to the spot a nailed home the penalty. It was the first goal by an LSU goalkeeper since 2013 when Megan Kinneman scored a penalty against No. 13 Southern California.

Kinneman is the all-time GK goal scoring leader in LSU history with three goals – one in 2013 and two in 2012; all three came via PKs. In 2008 against No. 25 BYU, LSU goalkeeper Mo Isom scored a goal off a free kick from distance. Kinneman, Isom, and Swift are the only three keepers in LSU history to score a goal.

SEC Standings
LSU sits in 11th place in the SEC standings with three games remaining on the conference schedule; the top 10 teams in the league advance to the conference tournament in Orange Beach, Alabama. LSU has earned six points in conference play this year and will need to get some results in the final three matches to move inside the top 10. The SEC West champion and the SEC East champion get the top two seeds at the SEC Tournament, and then teams three through 10 are decided by points accumulated in conference play. For a full list of standings, visit secsports.com.

Scouting South Carolina
The Gamecocks come in with a stout defense that is allowing 0.91 GAA; Heather Hinz has started all 14 matches and owns a GAA of 0.86. She’s had three solo shutouts on the season and allowed 12 goals. Offensively, the Gamecocks have four players that are tied for the team lead with four goals apiece. Catherine Berry, Ryan Gareis, Jyllissa Harris, and Corinna Zullo are the leading point getters with nine apiece.

Support LSU Soccer
You can donate directly to the LSU Soccer program by contributing to the Soccer Excellence Fund.