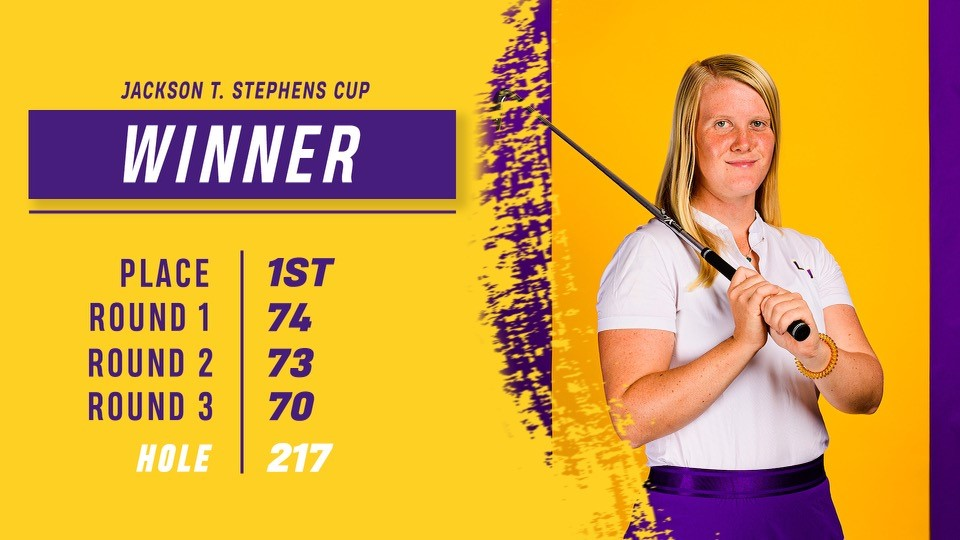 As a team, LSU is the number one seed and will play in the championship match Wednesday against South Carolina. The finals will be televised on The Golf Channel starting at 2 p.m. CT.

Both Tejedo Mulet, taking driver, and Lindblad, taking less club, found the fairway on the 394-yard hole and both found the green leaving longish birdie putts. Tejedo Mulet putted first and her attempt drifted by about three feet.

Then Lindblad stood over her putt and posted it dead center for the birdie and the win.

After being presented with the winner’s plate, Lindblad on The Golf Channel said: “I just wanted to give (the putt) a chance because in match play you just assume the other player is going to make the putt. So, this morning I had almost the same putt, but a little longer. I hit a good putt, but with a little too much speed. So, I just wanted to give it a good read and a good go.”

Lindblad had previously won two events in the 2019-20 season as a freshman and two events in 2021 as a sophomore. Her five wins now ties her with Megan McChrystal (2009-11) who also won five college tournaments.

Only Kristi Coats (1990-93) with six and LSU and WGCA Hall of Fame golfer Jenny Lidback with seven (1985-86) have won more individual golf titles at LSU.

The win was the 50th individual title won by an LSU golfer in the history of the program which dates back to its beginnings prior to the 1979-80 season.

Normally, LSU would be team winner after 54 holes, but in the Stephens Cup, the event now turns to match play and after posting a 3-over 291 on Tuesday, LSU will face South Carolina in the championship match. For the 54-holes, LSU was 18-over par 882 with rounds of 298-293-291. LSU finished up the 293 round this morning after the second round was halted by darkness on Monday.

South Carolina also had a 291 on the final day to finish eight shots back at 890, moving past Arkansas by one shot for the spot in the championship match. Arkansas and Ole Miss, tying for third at 27-over, will meet in the third-place match while Virginia (+37) and Baylor (+46) will meet for fifth.

On the final day, Lindblad and Latanna Stone both shot 2-under par 70s, while Tejedo Mulet posted 74 and LSU’s fourth counting score was a 77 from freshman Else Svensson.

Tejedo finished up her second round on Tuesday morning at 2-under 70 to stand in the lead at 1-under 143 after 36 holes.

Even with three bogeys on the first seven holes of the final round, Tejedo Mulet seemed to take back control of the tournament on the par 5 eighth hole with two great shots and beautiful long eagle putt that got her back to even par for the day. A tee ball in a divot caused her problems on 10, but a birdie on 12 continued to keep her in search of her first college win.

Lindblad moved into position with birdies on 13 and 14 and then a birdie on the par 5 17th hole tied her for the first time with Tejedo Mulet. But the native of Spain took the lead back with a birdie of her own on the 17th, before a bogey on 18 sent the tournament to a playoff.

But the sophomore from Spain has now in two consecutive tournaments posted her best collegiate finishes after a third last week in the Illini Women’s Invitational at Medinah and then following that up with the runner-up finish in The Stevens Cup. Tejedo Mulet in her last six rounds over 10 days has posted 68-71-71-73-70-74.

MATCH PLAY PAIRINGS
The match play pairings have been announced for Wednesday. Here’s how Coach Garrett Runion has set the lineup with Tejedo Mulet and Lindblad as the bookends: