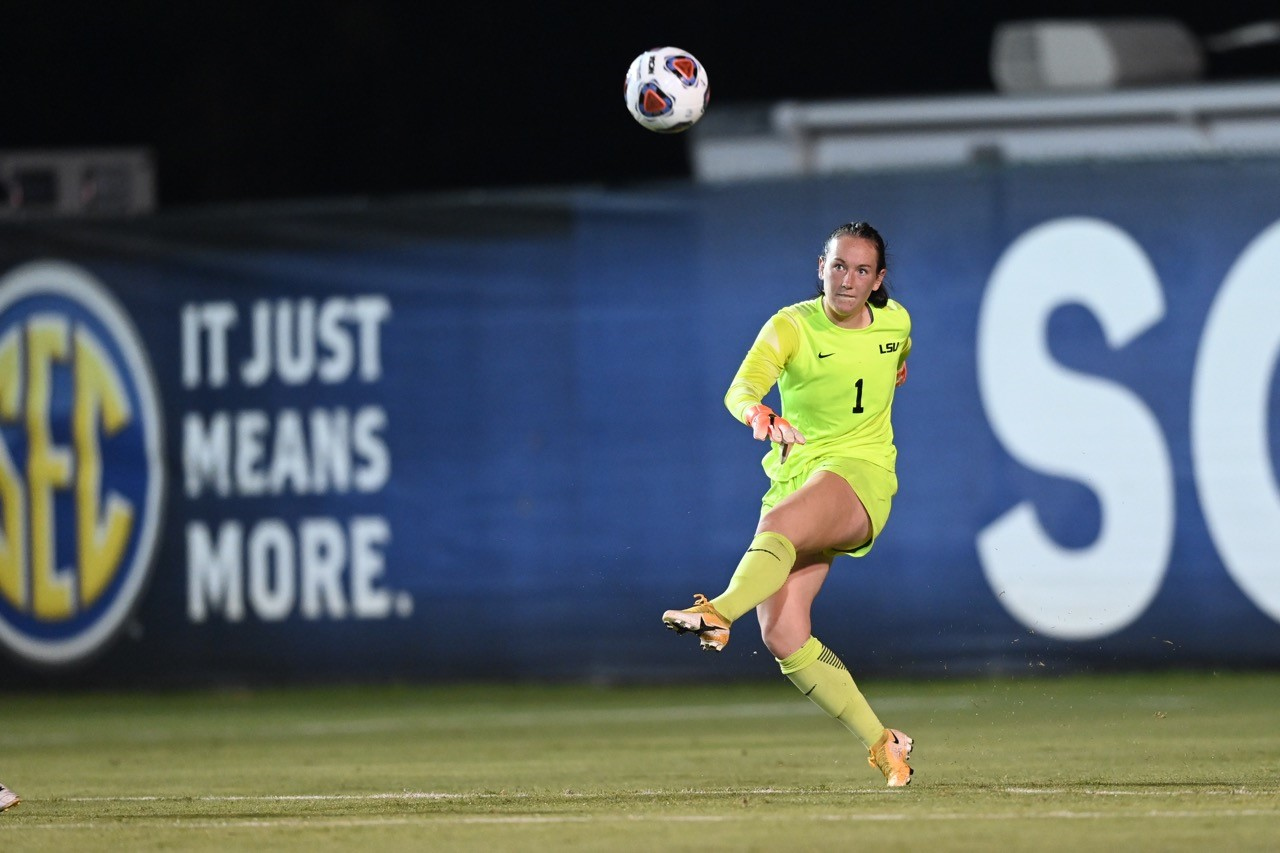 Lexington, Ky. – The LSU Soccer team (9-5-0, 2-5-0 SEC) got their second SEC win of the season as they defeated the Kentucky Wildcats (6-8-2, 0-7-0 SEC) on Thursday night at the Wendell & Vickie Bell Soccer Complex. The lone goal of the match came in the 73rd minute as goalkeeper Mollee Swift stepped up to the penalty spot and slotted the ball into the back of the net.

“It was great to see some fight back in us tonight,” head coach Sian Hudson said. “It was a total team effort all 90 minutes for that win. We played for each other tonight.

“It was awesome to see Swift score for us tonight. She’s one of our best penalty takers. Now we will look to carry this momentum from this performance tonight into our next match against South Carolina.”

The match opened with a back-and-forth contest in midfield for the first 20 minutes. LSU got its first shot on target of the match in the 24th minute as midfielder Athena Kuehn sent a shot on frame that was collected by Kentucky goalkeeper Laura Nielsen. Moments later, Kentucky’s counterattack led to a shot from outside the box that Swift collected to register her first save of the evening. Neither team was able to find a goal and went into the halftime break at 0-0.

Swift once again came up big for the Tigers as she went vertical to parry a powerful shot over the bar from a Kentucky attacker in the 57th minute.

The Tigers made their presence felt in the second half as they chased the go-ahead goal. Forward Riley Dixon sent a shot across goal in the 59th minute that narrowly missed the frame. Three minutes later, midfielder Meghan Johnson found herself on end of forward Alesia Garcia’s headed pass and in a one-on-one scenario that saw her shot denied by Nielsen with a great reflex save. Nielsen stopped two more chances not long after, denying ground shots from forward Tinaya Alexander and midfielder Maddie Moreau in the 65th and 71st minute respectively.

In the 73rd minute, Alexander found herself in the box and beat her defender on the dribble before being brought down and drawing a penalty for the Tigers. Swift ran the length of the field and placed the ball on the penalty spot before drilling the ball to the left side of goal and into the back of the net to give LSU a 1-0 lead. The goal is the first of Swift’s collegiate career, and the first goal for an LSU goalkeeper since Megan Kinneman’s penalty conversion in 2013.

73' | Our Secret Weapon@MolleeSwift scores the first goal of her collegiate career to give us the lead!

“It’s something that we’ve talked about prior,” Swift said on if she was surprised or not to be called on for the penalty kick. “I’m confident with doing it. It was my time to step up. I’m glad we could get this win on the road.”

Despite the goal, the Tigers stayed on the attack and were hungry for a second. In the 78th minute, Alexander carried the ball across the final third and into the box, beat her defender, and sent a shot to the left side of goal that was only denied by the post. Moments later in the 85th minute, Alexander once again carried the ball into the box and beat her defender by cutting outside and ripping a shot on goal that was denied by an outstretched Nielsen.

Swift made her third and final save of the match in the 88th minute as she denied a shot from Sara Makoben-Blessing to keep the match score at 1-0. Swift finished the evening with three saves and picked up LSU’s sixth clean sheet of the season.

The Tigers’ 24 shots and 11 corner kicks on the evening were the second highest tallies of the season for the Purple and Gold. Chiara Ritchie-Williams made the 88th start of her career to match Malorie Rutledge’s school record, and it was also her 91st career match played. The 91 matches played also matches Melissa Clarke’s school record that was set from 2005-09.

LSU will host the South Carolina Gamecocks at the LSU Soccer Stadium at 6 p.m. CT on Thursday, October 21.