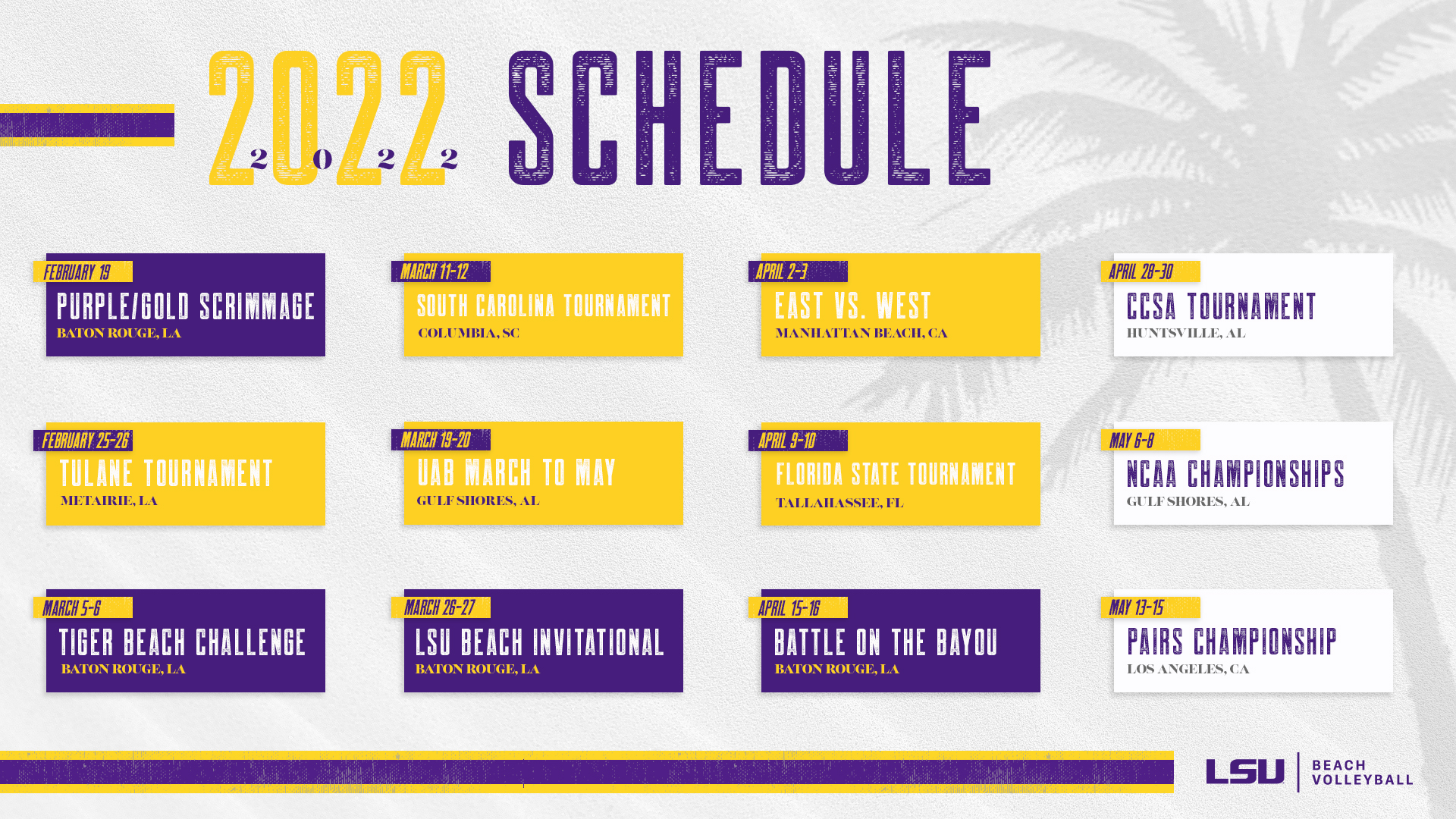 It will be a new look team in the spring for LSU in the sand as the Tigers lost eight players who saw significant time in the lineup through their careers. The Tigers have a lot of skill returning, but other than Ashlyn Rasnick-Pope, Kelli Greene-Agnew, Sydney Moore and Allison Coens, few players have seen significant time on the court.

The Tigers also brought in three significant graduate transfers who will push for playing time. Bella Bauman came to LSU after having a solid beach career at Grand Canyon where she saw some time playing on Court 1. Holly Carlton is a 6-7 former All-American from Florida who is making the transition to beach volleyball. Kylie Deberg is set the join the squad in the spring. She was a three-time indoor All-American at Missouri and is playing in her final year of indoor eligibility right now at LSU.

Prior to the start of its season, LSU will hold the Purple vs. Gold Scrimmage on February 19 that will be followed by a Kid’s Clinic.

The Tigers will start their season down the road in New Orleans at White Sands Volleyball in a tournament that Tulane will host February 25-26.

The following weekend, March 5-6, LSU will host the Tiger Beach Challenge. Among multiple other teams, Loyola Marymount is set to make an appearance at LSU Beach Volleyball Stadium that weekend. LMU made some noise at the NCAA Championship last season, upsetting LSU in the first round and finishing as the nation’s No. 3 team.

South Carolina is the only other SEC school to sponsor beach volleyball and LSU will make the trip to Columbia March 11-12 for a tournament hosted by the Gamecocks at Wheeler Beach.

The Tigers will then compete at UAB’s March to May on March 19-20 in Gulf Shores at the same location where the NCAA Championship is held in May.

The Tigers’ second home tournament is the LSU Beach Invitational March 26-27. Florida State is one of the teams scheduled to be in attendance as the two teams will matchup at LSU Beach Volleyball Stadium for the second straight year. Florida State won the matchup last year in Baton Rouge, but the Tigers ultimately eliminated the Seminoles in an elimination match at the NCAA Championship later in the season.

After the home weekend, LSU will head out west for the East vs. West tournament that takes place on Manhattan Beach April 2-3. In the past, LSU has played teams such as UCLA, USC and Florida State at this tournament. The last time it was held was in 2019.

LSU will go from far west to east as the Tigers will compete in Florida State’s tournament on April 9-10.

The regular season will conclude with the Battle on the Bayou at LSU Beach Volleyball Stadium which includes a crawfish giveaway.

The CCSA Tournament will return to Huntsville, Alabama for the second straight season from April 28-30 at the John Hunt Beach Volleyball Complex.

The NCAA Championship will be back in Gulf Shores on May 6-8 where the nation’s top eight teams get invited to compete for the national championship.

After the nation’s top team is crowned, the Pair’s Championship will take place in Los Angeles on May 13-15.