Ed Ingram has seen it all. Being on top of the mountain, going undefeated and winning a national championship. But also the trials and tribulations of playing a football season in the midst of a pandemic. He’s been there every step of the way. 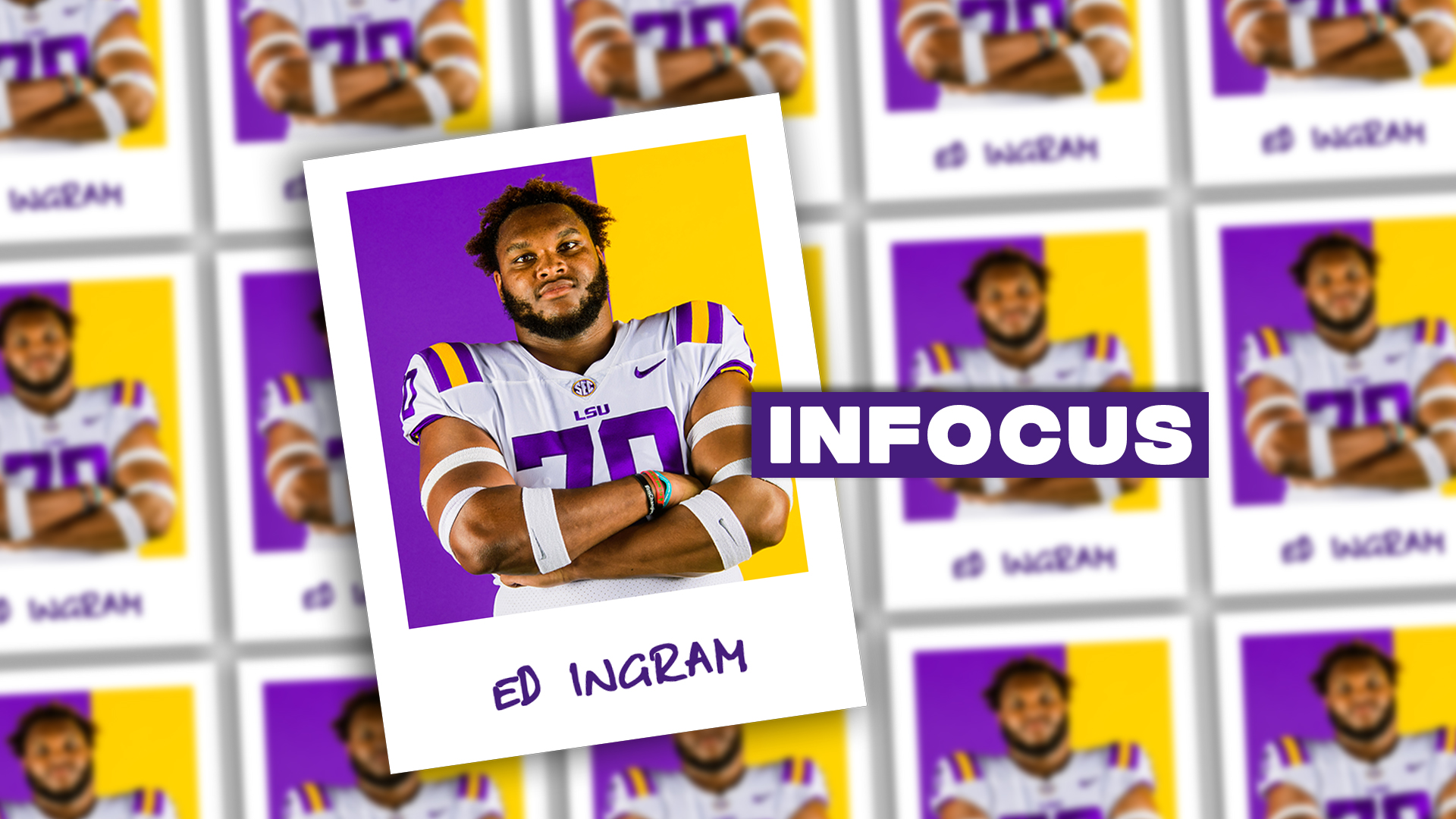 Ed Ingram has seen it all.

Being on top of the mountain, going undefeated and winning a national championship. But also the trials and tribulations of playing a football season in the midst of a pandemic.

He’s been there every step of the way.

An immediate impact freshman in 2017, and a three-year starter on LSU’s offensive line, not many people have taken more snaps in purple and gold than Ingram. In fact, entering this season, he and fellow senior Austin Deculus combined to start 58 games during their LSU careers.

Quiet, and mostly keeping to himself, when Ingram steps on the field he can be as dominant as any linemen in the country. He has the ability to flip that switch; the great ones always do.

After sitting out 2018, Ingram re-joined the Tigers and posted his best campaign yet as a member of LSU’s Joe Moore Award-winning offensive line, paving the way for 1,000-yard rusher Clyde Edwards-Helaire and Heisman Trophy winner Joe Burrow, but that was just the beginning.

His junior season, he started nine games and made nine starts, finishing the year with 722 snaps, third most among all LSU offensive lineman, all in the middle of an abnormal 2020 season in college football.

“He’s powerful,” said LSU running back John Emery about Ingram. “We trust Ed. I know I can trust him. He barely even makes mistakes in the game. He always executes on every play.”

Ingram has experienced everything during his time in Baton Rouge. Packed stadiums and standing room only Tiger Walks, to empty stadiums and empty Tiger Walks. Last year taught him to not take anything for granted, and to enjoy every moment wearing the LSU uniform.

“The craziest thing about last year was having no tailgates,” Ingram said on walking down Victory Hill amid COVID-19. “When we were walking down the Tiger Walk, and seeing literally 10 fans, it seemed so empty and vacant outside the stadium. It was a weird feeling.”

But even after a season filled with adversity, Ingram couldn’t get enough of Tiger Stadium, choosing to bypass the NFL and return for another year — his fifth — for the Fighting Tigers. He, along with the entire offensive line unit, wanted another chance to improve in college.

Another year? ehhh what the heck, let’s ride #GeauxTigers 🐅 pic.twitter.com/QOn3YGaKk0

Even in his final season, Ingram is trying to be a sponge with first-year offensive line coach Brad Davis and absorb everything he can. It’s not easy transitioning from one coach to another, but Ingram feels LSU’s offensive line is communicating and meshing well with Davis so far.

“I think the guys really understand who I am now and how passionate I am about LSU football,” Davis said. “They understand now why I push them so hard to get better every day. Ed and the other veteran leaders have grown; I’ve seen progression in the way those guys work and impact their teammates.”

There’s a handful of things Ingram focused on during the offseason:  pass protection, his technique, and most importantly, getting right on the mental side of things to be his best self each Saturday.

“I worked a lot on pass protection,” Ingram said. “That was one of my biggest problems coming back. I had to get back into my rhythm and learn the techniques. Being more technical in what I do, trying to calm myself down in actual games to make things slower.”

It’s the offensive line that has the ability to create openings for LSU’s running game, which can translate directly into points. The mindset that they’re one block away from doing that motivates Ingram and the rest of LSU’s unit to keep pushing, even when push comes to shove.

“Like Coach (Davis) says, we’re one block away from busting a big touchdown or a large amount of yards,” Ingram said. “We’re always one block away, so we have to keep working.”

Ingram and the offensive line were able to generate some running room for junior running back Ty Davis-Price last week, as he rushed for 147 yards and two touchdowns on 22 carries. That’s a positive the Tigers can carry into this week’s game versus No. 20 Florida.

“Our kids have made a decision to focus and excel in the running game,” Davis said. “Last week was a step in the right direction, and I think we’re going to build on it. We’re going to expand on it and work to become a more effective run unit.”

There’s a different energy this year, Ingram says, and the increase in leadership will ultimately lead the Tigers forward through whatever hurdles they face. As a fifth-year senior, and someone who has been at LSU through it all, Ingram looks to be a centerpiece of that leadership.

“Everybody is holding each other accountable,” Ingram said. “We’re staying according to plan, we’re trusting the process. Focus on each game, one by one, every week.”

“I’m very proud of our guys,” Davis said. “I hope I’m adding value to them as well, and I can help them achieve their goals of finishing with a strong season and move on to the next level of football.”

Ingram believes that the future for LSU’s offensive line unit is bright. Even after he’s gone, he looks forward to seeing what the future holds for the younger guys, a self-motivated group eager to get their turn.

“A lot of guys came here for a reason,” Ingram said. “We have talent on the offensive line. They may be young, but we can still get it done.”

The future is bright for Ingram, too. He came back to improve, and it’s his hope that it will have paid dividends in the end.