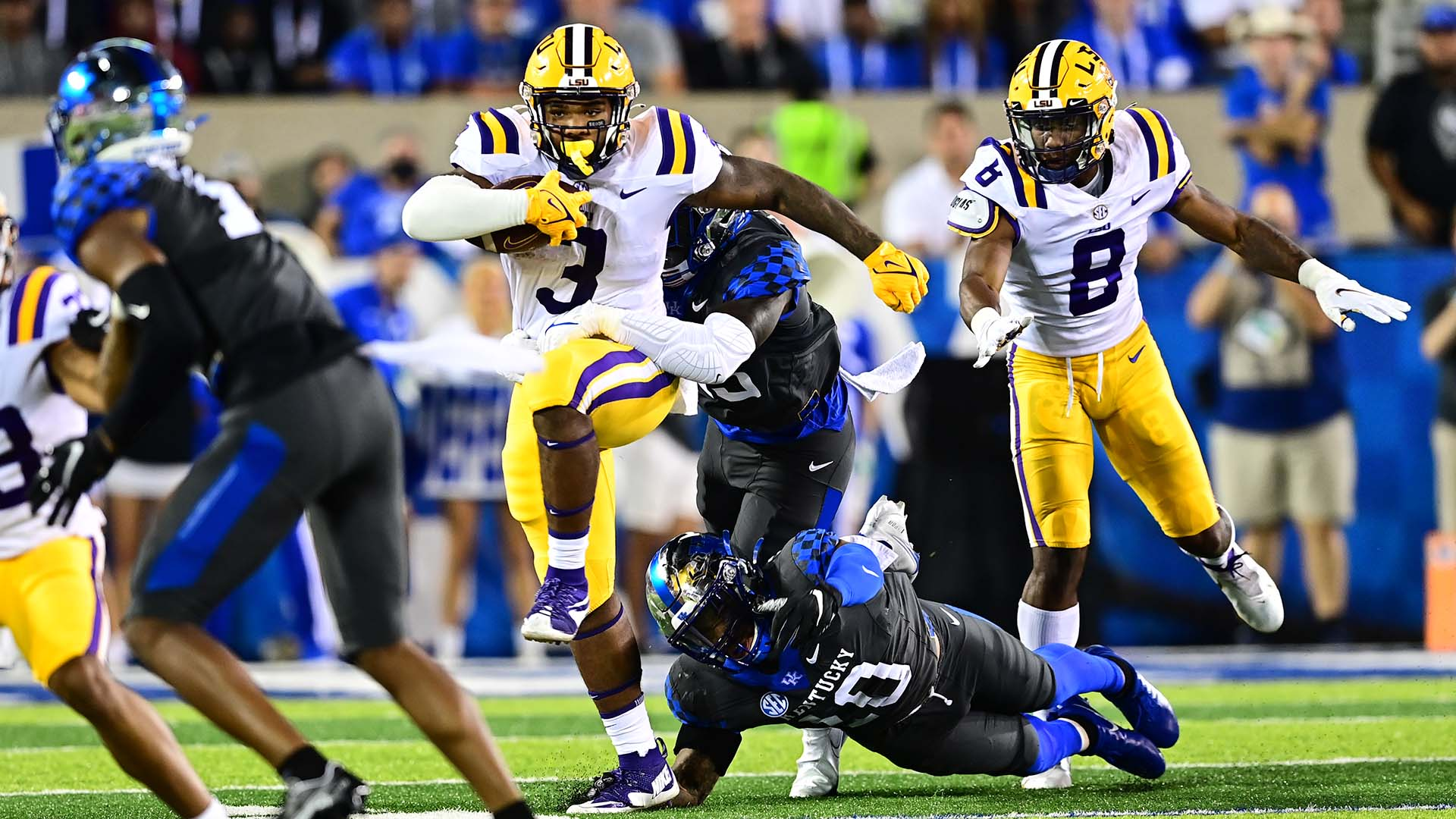 Kentucky junior quarterback Will Levis was responsible for five touchdowns, leading the Wildcats to victory. He was 14-of-17 passing for 145 yards with three touchdown passes, while rushing 10 times for 64 yards with two scores.

LSU running back Tyrion Davis-Price set a career high with 147 rushing yards and two touchdowns on 22 carries, becoming the 51st Tiger to surpass 1,000 in his career.

Tigers quarterback Max Johnson was 22-of-38 passing for 261 yards with a touchdown. Kayshon Boutte led LSU with eight catches and 73 yards, while Malik Nabers scored his first touchdown as a Tiger and had three catches for 66 yards.

The Wildcats rushed for 330 yards on 45 carries, averaging 7.3 yards per carry.

LSU (3-3, 1-2 SEC) returns to action at 11 a.m. CT on Saturday, Oct. 16, when Florida visits Tiger Stadium. The game will be televised by ESPN. Pregame on the LSU Sports Radio Network begins at 9 a.m.

Tickets are available now at www.LSUtix.net. Fans are reminded that COVID protocols have been lifted at Tiger Stadium starting this week.

Kentucky won the coin toss and deferred its decision until the second half. LSU took the opening kickoff while defending the north end zone in the first quarter.

After converting a third-and-7 with 10-yard pass to Nabers, Johnson was sacked on a blindside blitz by Kentucky linebacker DeAndre Square at the LSU 44-yard line and fumbled. Kentucky recovered and then used a 20-yard pass from Levis to Isaiah Epps to setup a 3-yard touchdown pass from Levis to Chris Rodriguez Jr. on fourth-and-goal.

Kentucky increased its advantage to 14-0 on the first play of the quarter, capping a five-play, 69-yard drive with an 11-yard touchdown pass from Levis to wide receiver Wan’Dale Robinson.

Though LSU running back Armoni Goodwin ‘s pair of runs resulted in a first down to start the ensuing drive, the Tigers weren’t able to advance past their 35 and Avery Atkins punted 53 yards to the Kentucky 12.

LSU linebacker Damone Clark ‘s tackle behind the line of scrimmage on third-and-3 forced Kentucky to punt. After a first down rushing by Tyrion Davis-Price, the Tigers were came up a yard short of overcoming a 7-yard sack of Johnson with Jaray Jenkins’ 16-yard reception.

Atkins’ 54-yard punt was downed at the Kentucky 2. Levis gained a first down with an 11-yard run, then Rodriguez added 21 more with a run to the Kentucky 39. Solid tackling by the Tigers forced a punt by Colin Goodfellow punted to the LSU 14.

Another sack of Johnson led to Atkins’ 43-yard punt to the Kentucky 25. With 61 seconds left in the half, Kentucky advanced near midfield before a sack by Ali Gaye and BJ Ojulari ended the half with the Wildcats ahead 14-0.

On the opening drive, a 22-yard run by Rodriguez moved the ball into LSU territory and Levis added 33 on a designed run to the LSU 6. On second-and-goal from the 1, Levis bulled his way into the end zone for a TD. Following the seven-play, 75-yard drive, Kentucky led 21-0 with 10:57 left in the quarter.

LSU put together its most productive drive of the game to march 75 yards and answer the score. A second-down pass was corralled by Boutte for a 17-yard gain to the LSU 44. Boutte gained a first down with another 10 yard catch which came between runs of 8 and 30 yards by Davis-Price. On second-and-goal from the 10, Johnson found Devonta Lee at the 1-yard line. Two plays later, Davis-Price bulled in for the touchdown on fourth-and-goal.

Cade York’s PAT cut the Kentucky advantage to 21-7 with 6:43 left in the quarter.

The momentum was short-lived for LSU, as Kentucky responded with a 10-play, 75-yard drive that ended with Levin’s 5-yard keeper for a touchdown.

After crossing midfield with a 15-yard pass to Jenkins, LSU’s drive stalled. A fourth-down pass to Jack Bech was incomplete and Kentucky took over at its 44.

Levis needed only three plays to span 56 yards and add to the Wildcats’ total. A 25-yard touchdown pass to JuTahn McClain gave Kentucky a 35-7 lead with 12:07 remaining in the contest.

LSU continued the scoring spree when Johnson looked deep to Nabers who came down with a 41-yard touchdown reception in the end zone. With 11:03 to play, the Tigers trailed 35-14 following the four-play drive.

A quick three-and-out forced by LSU’s defense led to a 46-yard punt fair caught by Trey Palmer at the LSU 22.

A terrific 37-yard toe-tap catch along the left sideline by Boutte setup another touchdown drive for LSU, as Davis-Price did the dirty work in the red zone while eclipsing 1,000 career rushing yards. His 2-yard touchdown run with 5:29 to play cut the Kentucky lead to 35-21.

LSU’s onside kick by York was recovered by Kentucky at the LSU 44.

Kentucky added its final score with an 18-yard touchdown run by Rodriguez with 4:23 to play.