Preview: Tigers Travel to Lexington to Face No. 16 Kentucky 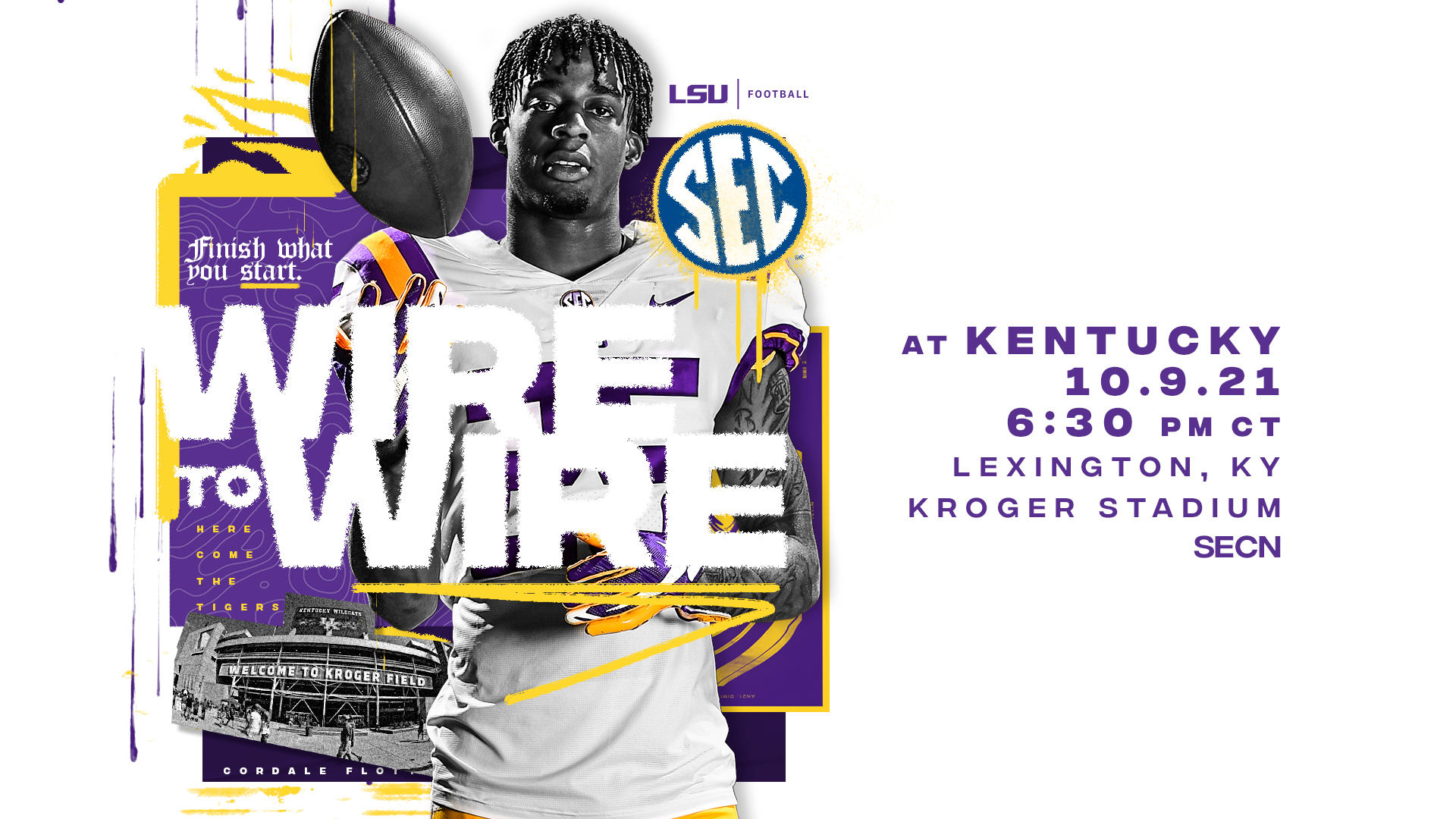 LSU (3-2) looks to bounce back on Saturday night against Kentucky (5-0) in their first trip to Lexington in 14 years.

Kickoff is set for 6:39 p.m. on the SEC Network and the LSU Sports Radio Network.

There’s a lot of history in this series, just not recent history. The Tigers last played the Wildcats in Tiger Stadium in 2014, winning 41-3 behind 127 yards rushing and two touchdowns from running back Terrance Magee. The Bluegrass Miracle — the highlight — will forever be one of the greatest finishes in college football history, and Saturday marks a new chapter in this rare, but exciting cross-division matchup.

“Good week of practice,” said head coach Ed Orgeron on Thursday. “Very spirited. We worked on a lot of the things that we said we were going to work on. Saturday night is going to be a chance to prove it against a very good football team in a hostile environment.

Finish the play.
Finish the game.
Finish what you start.

Do that, and anything can happen. pic.twitter.com/XVBvTWTo9F

Quarterback Max Johnson continued to make strides last week, going 26-for-46 for 325 yards passing and touchdown. The freshman receivers, along with sophomore Kayshon Boutte, continue to springboard the LSU offense as Jack Bech recorded seven catches for 84 yards, Boutte tallied six for 127 yards and a score, and Brian Thomas Jr. went for five catches for 32 yards of his own.

On the defensive side, senior linebacker Damone Clark led the Tigers in tackles for the fifth consecutive game last Saturday against Auburn with 13 (eight solo) and junior safety Cordale Flott continued to impress with five tackles and a pass break up. Clark and Flott have stepped up in a big way in 2021, and the two veterans look to continue playing inspired football in the weeks ahead.

“I know he’s hungry,” said defensive end Ali Gaye on Cordale Flott. “He has a lot to prove. We have him, and many other players, looking to step up in the next few games. I’m really happy that he’s playing the way he’s playing, and I can’t wait to see how much better he gets.’

Good news for the LSU secondary: Orgeron said on Thursday that freshman safety Sage Ryan is expected to make his debut in some capacity on Saturday.

“He has been practicing outstandingly,” Orgeron said on Ryan. “He’s been all over the field. I do believe that he’s going to get a chance to play.”

Kentucky is led by junior quarterback Will Levis and one of the premier offensive line’s in the SEC. Levis has thrown for 989 yards and eight touchdowns through five games. On the ground, running back Chris Rodriguez Jr. leads the conference in rushing with 104 carries for 612 yards (5.9 Y/C) and four touchdowns. Receiver Wan’Dale Robinson leads the SEC in receiving with 467 yards and three touchdowns.

Averaging 29.0 points per game, playmakers are plentiful on Kentucky’s sideline, and the Tigers are going to have their work cut out for them in a hostile road environment. Line of scrimmage will be a deciding factor in who comes out victorious.

“They run the ball so well, they’re so efficient,” Orgeron said on Kentucky. “To be minus nine in the turnover ratio and be 5-0 is un heard of. They’re very well coached, they’re balanced, they have a good scheme. The quarterback knows where to go with the ball.”

Like Gaye said on Thursday, the train keeps moving, and you have to keep moving with it.

Each game is a learning experience with a chance to improve, and the Tigers will have that opportunity vs. a top-20 opponent on Saturday night.