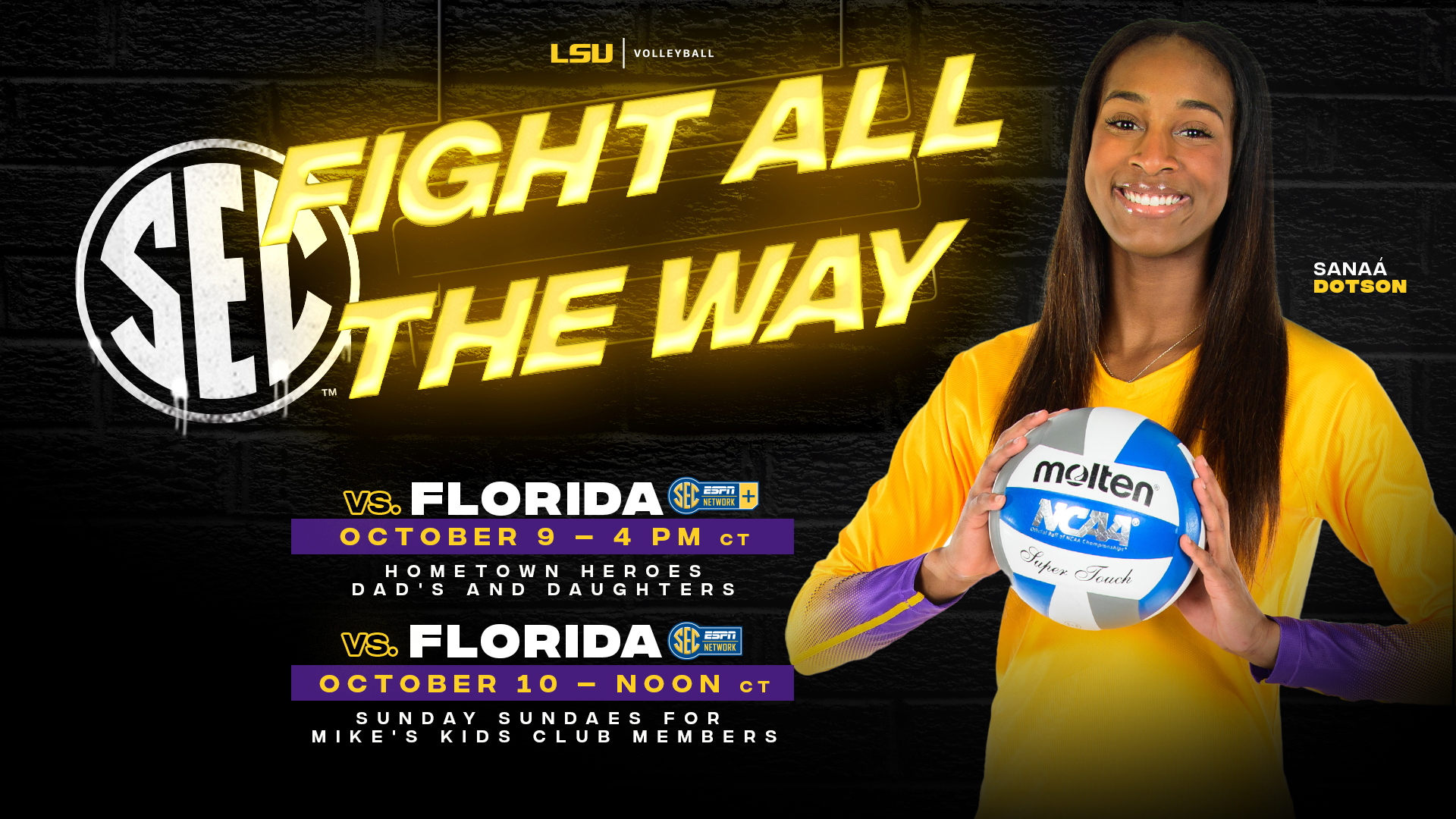 The first 100 fans at Saturday’s match will receive a “Set the Tone” t-shirt and we will be honoring our hometown heroes such as healthcare workers, police officers, and fire fighters. Sunday will be Mike Kid’s Club Day where kids in attendance will receive Sunday Sundaes and after the match, the student-athletes will do post-match autographs.

All fans in attendance are required to wear a mask to maximize protection and prevent possible spreading of COVID-19.

The Tigers are coming off a convincing straight-set victory over Missouri as they enter the meat of their conference schedule. Although LSU had its best offensive performance Wednesday night with a season-high .419 hitting percentage, their bread and butter is defensively, specifically at the net where they rank No. 2 in the SEC with 2.83 blocks per set.

“Anytime you get a win your confidence gets a boost,” said head coach Fran Flory. “We are starting to get back to where we thought we could be at the beginning of the season. Getting pieces back like Paige [Flickinger] and players getting m in the SECore comfortable in new roles like Ella [Larkin] is great to see. If we can find consistency in things like that, I think we will continue to build and grow.”

Outside hitter Kylie DeBerg leads the Tigers and is ranked No. 3 in the SEC with 4.22 kills per set and 4.76 points per set, while also pacing the team with 15 aces. Right side Taylor Bannister is picking up speed and averages 2.42 kills per set. Bannister has reached double-digit kills in three of the last four matches and has 1,715 career kills – 21 kills shy of becoming the program’s all-time kill leader.

LSU trails in the all-time series against Florida 14-49 and has lost the last 18 matches.

“Florida, like us has battled through injuries and changes in its lineup this season,” said Flory. “They are creating things without their key pieces being able to carry the load that they expected as well. I think they figured it out last weekend like we figured it out this week.”

Florida enters the weekend on a three-match winning streak and has not dropped a set since falling to Mississippi State in Gainesville, Fla. on Sept. 24. The Gators lead the SEC with a .299 hitting percentage and 13.11 assists per set. The Gators hold their opponents to a .185 attacking percentage thanks to 2.59 blocks per set. Both statistics rank No. 4 in the league.

Outside hitter T’Ara Ceasar leads the Gators with 3.74 kills per set and 19 total aces. Outside hitter Sofia Victoria follows with 3.10 kills per set. Both Ceasar and Victoria are beneficiaries of setter Marlie Monserez who leads the SEC with 11.28 assists per set, which is also the 7th best mark in the country.

“LSU-Florida is a match of physical volleyball over the net,” Flory said. “The match is typically won at the net with who is blocking and killing more balls. Our offense will need to lead us again, we need to effect their key players and we must execute the game plan.”