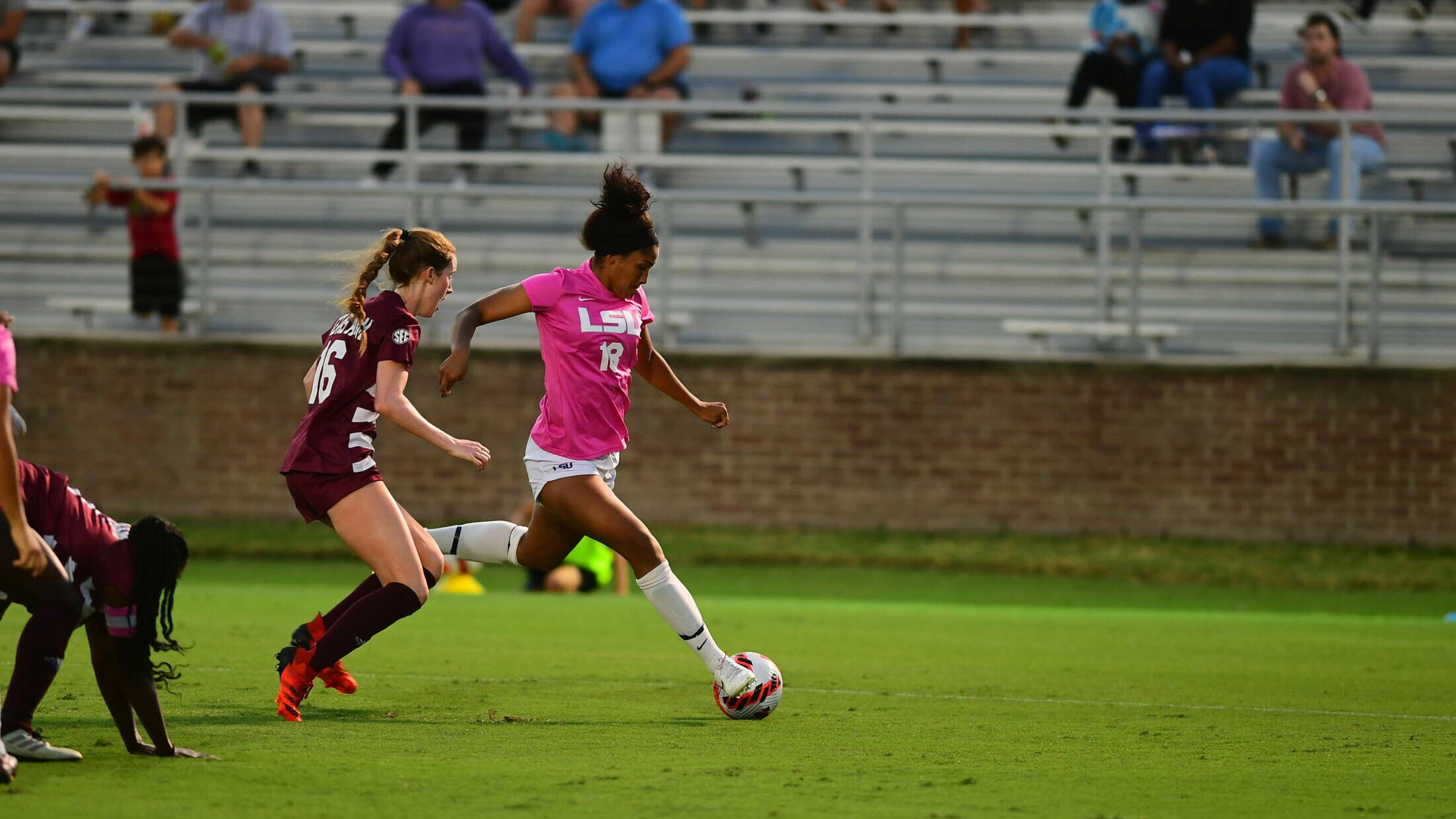 Goalkeeper Mollee Swift made the first stop of the match in the 3rd minute as she dove to her left side and parried away a shot from the top of the box from an Aggie attacker. Swift would make two more saves in the half, denying shots in the 10th and the 35th minute.

Texas A&M grabbed the first goal of the night in the 10th minute as Lauren Geczik’s long through ball found Barbara Olivieri, who slotted the ball past Swift and into the goal after the ball bounced off both goalposts.

The Tigers pressed for an equalizer. Midfielder Athena Kuehn had LSU’s first big chance of the night in the 19th minute as she received the ball with her back to goal, turned to beat her defender, and sent a shot that only narrowly went wide of the post. Dixon grabbed LSU’s first shot on target in the 36th minute as she sent a strong shot on goal that was caught by Texas A&M goalkeeper Kenna Caldwell.

LSU had two big chances just before halftime as midfielder Chiara Ritchie-Williams hit a powerful effort from 35 yards out in the 40th minute that just skimmed the top of the crossbar. Forward Alesia Garcia followed this up a minute later with a shot from 20 yards out across goal that just sailed wide of the frame.

In the 58th minute, midfielder Wasila Diwura-Soale fouled an Aggie attacker in the box and the referee pointed to the penalty spot for Texas A&M. Maile Hayes stepped up to the spot and drilled the penalty into the top-left corner to extend the lead to 2-0 on the night.

The Aggies made it 3-0 on the night in the 62nd minute as Hayes found Kate Colvin in the box, who hit a left-footed shot from 15 yards out that found its way into the back of the net.

The Tigers pulled one back in the 85th minute. Garcia laid the ball off to Dixon, who turned and placed the shot into the bottom left corner with her left foot to cut Texas A&M’s lead to 3-1. The goal is the first in Purple & Gold for Dixon, and the eighth total in her collegiate career. With Dixon’s goal, the Tigers’ number of goal scorers on the season increased to 12.

Olivieri scored the final goal of the night to make it 4-1 in the 88th minute after Mia Pante’s pass put her through to a one-on-one with Swift that saw Olivieri slot the ball past the Tiger goalkeeper.

Up Next
LSU will travel to Auburn, Alabama to take on the No. 22 Auburn Tigers at 2 p.m. CT on Sunday, October 10.