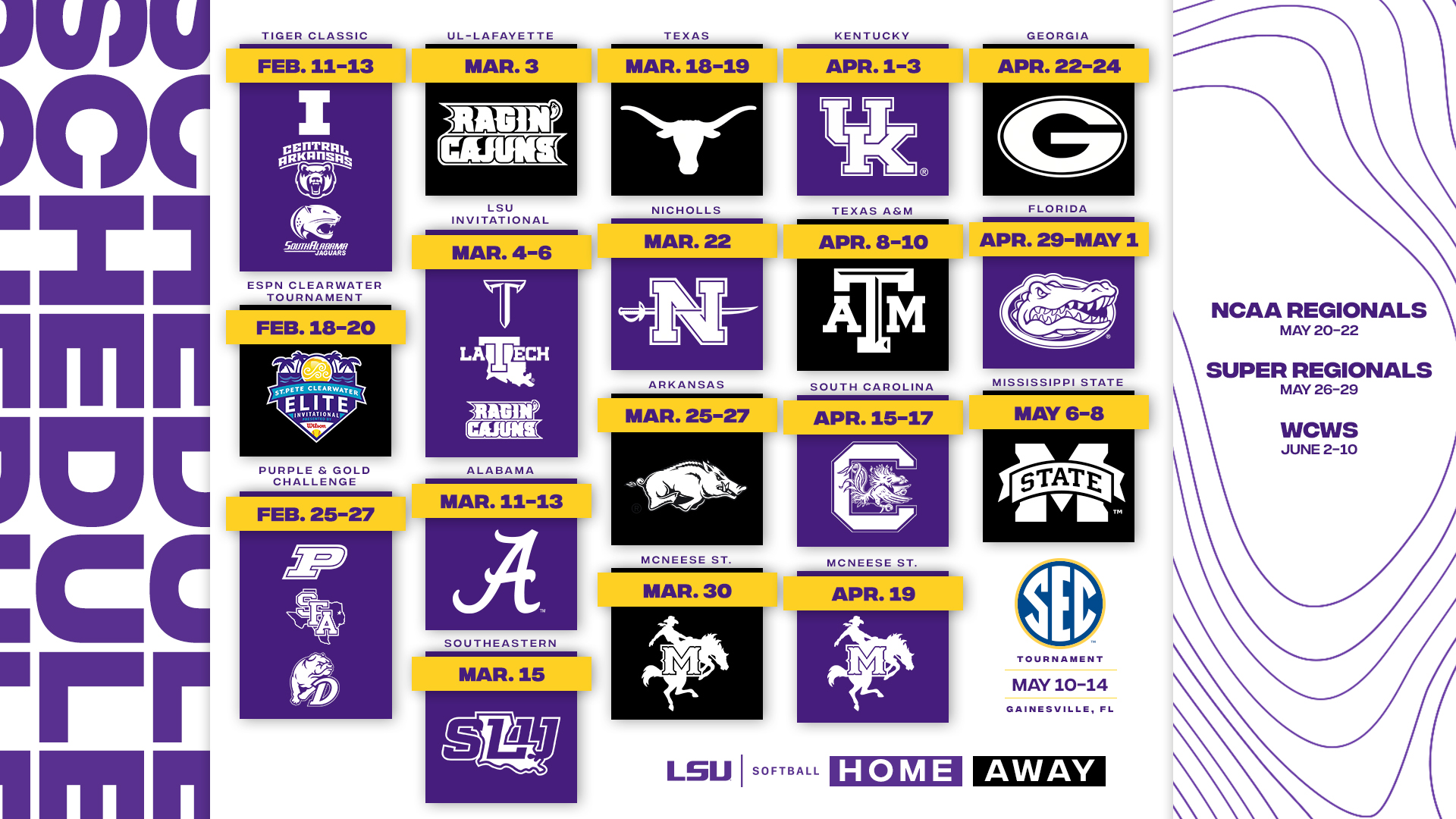 The Tigers will open the season with the Tiger Classic on Feb. 11-13 at Tiger Park. The tournament will feature games against Illinois, Central Arkansas and South Alabama. The next weekend, LSU will compete in the St. Pete Clearwater Elite Invitational, an ESPN event, in Clearwater, Fla. Feb. 18-20. Opponents and times have yet to be announced.

The Fighting Tigers will return home Feb. 25-27 for the Purple & Gold Challenge where they will host Purdue, Stephen F. Austin, and Drake, and will then hit the road on March 3 to challenge UL-Lafayette in Lafayette, La.

The Tigers will have their third home tournament – The LSU Invitational – where they will face Troy, Louisiana Tech and ULL March 4-6.

After the opening weekend of SEC play at home vs. Alabama March 11-13, the Tigers will host a mid-week contest against Southeastern Louisiana on March 15, play a series at Texas on March 18-19. It will be the Tigers first trip to Austin, Texas since the 2010 season. LSU will have another mid-week game against Nicholls State on March 22.

The Tigers will take on Arkansas March 25-27 in Fayetteville, Ark., and then make a trip to Lake Charles, La. to play McNeese State on March 30.

The SEC slate will resume for LSU with the Kentucky series on April 1-3 at Tiger Park. The annual Stirkeout Ovarian Cancer teal game and SEC’s All for Alex campaign will be held on Saturday, April 2. The 13 SEC schools will join together to wear teal or teal accents on April 2 as the entire league recognizes her impact on the softball community nationwide and in the fight against ovarian cancer.

Next will be a road series at Texas A&M in College Station, Texas April 8-10, followed by another series at Tiger Park against South Carolina April 15-17.

The final non-conference game will be at Tiger Park on April 19 against McNeese State before concluding the regular season with conference series at Georgia April 22-24, at home vs. Florida April 29-May 1, and at Mississippi State May 6-8.

The SEC Tournament will be held May 10-14 at Katie Seashole Pressly Stadium in Gainesville, Fla.

LSU will return 21 student-athletes from last season, including a pair of NFCA All-Americans Taylor Pleasants (2021) and Shelbi Sunseri (2019), a NFCA All-Region honoree in Ali Kilponen, and Ciara Briggs, a member of the 2021 All-SEC Newcomer Team.