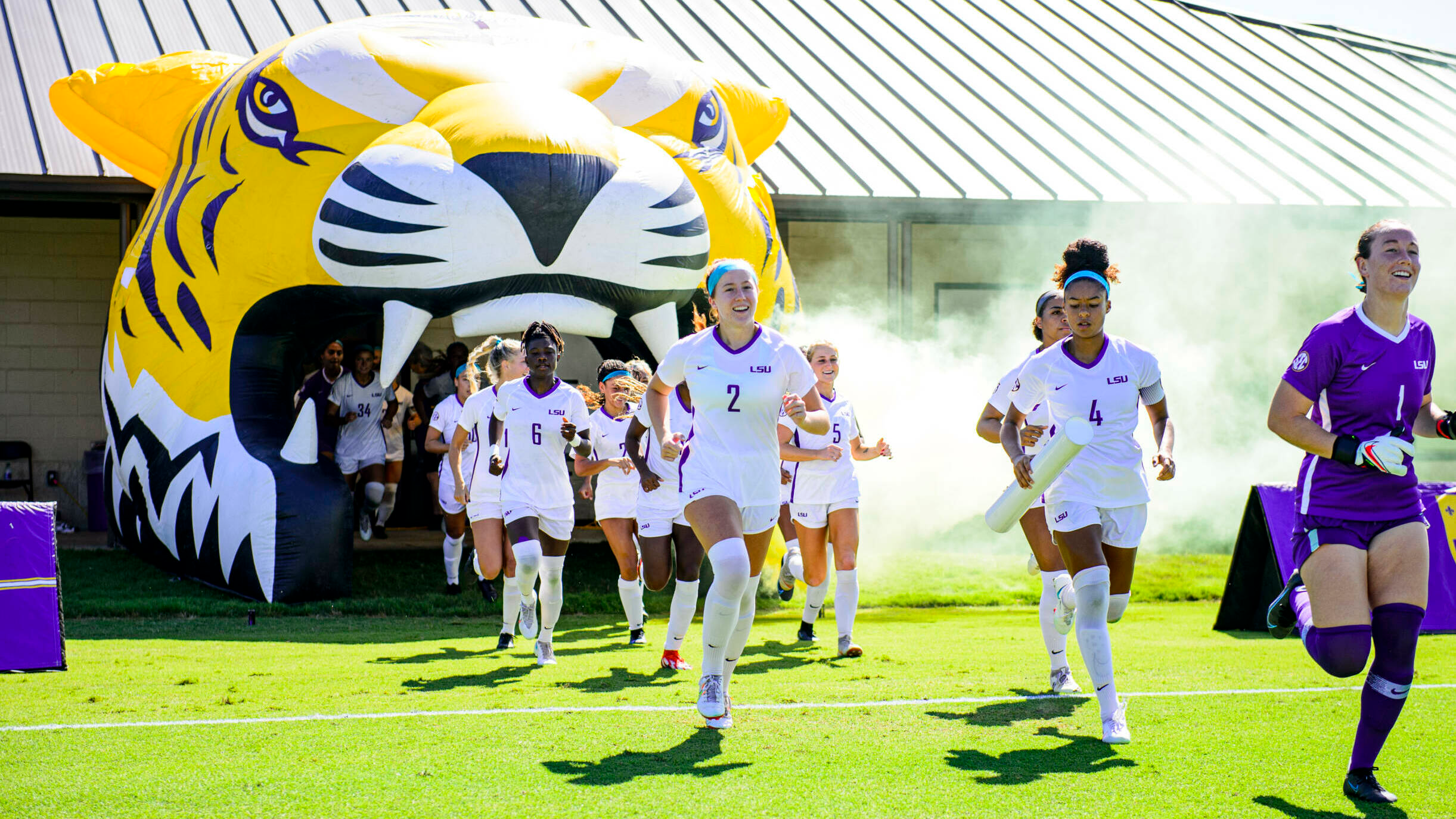 Fan Information
The LSU soccer team will be wearing PINK jerseys on Thursday night to honor and raise awareness for those affected by breast cancer. Fans should also come to the game with an empty stomach as $1 hot dogs will be available for purchase to everyone in attendance. It’s also Faculty Appreciation Night and Girls Scouts Night at LSU Soccer Stadium.

Series History
The Tigers and Aggies have met 12 times dating back to the 2009 season. Texas A&M has won 11 times, and the two teams tied in the 2009 NCAA Tournament; the Aggies would advance via penalty kicks in that match. The Tigers have given Texas A&M battles the last two times out losing by one goal in each contest. Tinaya Alexander scored a goal off a header in the 26th minute of last year’s regular season match against the Aggies in what wound up being a 2-1 loss on the road; Wasila Diwura-Soale had the assist.

Coaches Corner w/ Sian Hudson
On being back at home
“We’re excited to get back out there in front of our home fans. Glad we are playing at home on Thursday. It’s going to be a big boost for us to have our fans behind us and cheering us on.

On what the team’s focus is going into Thursday night
“We want to be defensively compact and going back to the basics. We want to compete and win our individual battles, the 50/50 balls. We want to move the ball and keep possession. Overall, we want to play fast and play with confidence. Our girls are ready to get back to proving themselves again.”

On Chiara Ritchie-Williams’ impact on the program
“She’s just an amazing individual on and off the field. She’s the ultimate teammate in the way she prepares herself for the game and how she helps those around her. She’s played five huge years here for us and she’s our heartbeat. What we do is a reflection of her.”

Record Breaker
Chiara Ritchie-Williams broke the LSU school record for most minutes played in a career on Friday night against Alabama. She played the full 90 minutes in the contest to move her career minute total to 7,828. She passed the previous record holder, Alex Arlitt (2011-15), who had accumulated 7,782 minutes of playing time.

Two other records to keep your eyes on regarding Ritchie-Williams will be games played and games started. Assuming she starts and plays in the game on Thursday night against Texas A&M, she will move into a tie for third place with Alex Arlitt for career games played at 89. The school record is owned by Melissa Clarke at 91 games played. If Ritchie-Williams starts the match, she will have 86 career starts, which will be the fifth most in program history.

Statistical Leaders
Tinaya Alexander (17 points) and Alesia Garcia (12 points) have been leading the way offensively for the Tigers this season with seven and five goals, respectively. Rammie Noel and Tinaya Alexander both have three assists apiece this season to tie for the team lead, and a total of 11 players have scored goals. Alexander’s 0.64 goals per game rank No. 5 in the SEC and her 1.55 points per game rate as the eighth highest average in the conference.

Mollee Swift owns a record of 8-3-0 in net this season and is allowing a GAA of 0.81 which ranks as the third best average in the SEC.

Ratings Percentage Index
LSU checks in at No. 33 in the latest RPI rankings that were released Monday of this week. Texas A&M comes in with an RPI of No. 64.

Home Sweet Home
LSU is averaging 1,420 fans through their first four home games of the 2021 season which ranks as the fourth highest average in the SEC. Tiger Nation helped set a program record of 3,021 fans on September 17 as LSU downed Mississippi State, 2-0.

Scouting Texas A&M
Maile Hayes leads the Aggies with 12 points on the season thanks to her five goals and two assists. Natalie Abel and Mia Pante are the next two highest point scorers with eight apiece. Kenna Caldwell has started 11 of the 12 matches this year for Texas A&M and has a GAA of 1.30 to go along with a save percentage of .741.